Welcome back!  How are you?  BDH and Little Buddha are checking the latest weather forecast.  I've got shoveling to do after we're done here, and the snow will turn to freezing rain at some point this morning, so that's going to make things extra messy.  Hold on, the guys say it's supposed to shift to rain around 11:00.  Got it.  Well, that should be fun.  I should probably stretch first.  Anyway, let's check out today's headlines.  There's a fresh pot of coffee on the table, so grab yourself a nice medium DD, because it's time to clear out some Thursday Clutter.

The Senate's cover-up of Donald Trump's corruption is complete.  Senate Republicans acquitted Trump on both impeachment articles yesterday, which was a foregone conclusion, since they made it clear the fix was in from the start.  However, we must applaud Senator Mitt Romney (R-Utah) for having the courage to do the right thing and vote to convict Trump on the abuse of power charge.  Romney becomes the first senator in our country's history to vote to convict a president from his own party,  It's all the more notable, considering that Romney was the Republican presidential nominee in 2012.   This wasn't some backbencher voting to convict - it was the former face of the party.

We have criticized Romney a lot over the years for his blatant opportunism during his political career in Massachusetts, and we stand by those comments.  However, it took courage to break with his party yesterday, knowing full well the repercussions will likely be severe.  It's just too bad none of his other colleagues in the GOP had the backbone to do the same (hello, Susan Collins.)  Trump and his cronies will try to claim otherwise, (i.e. lie about it), but there's no escaping for him from the fact that he was impeached, and the vote to remove him was bipartisan. 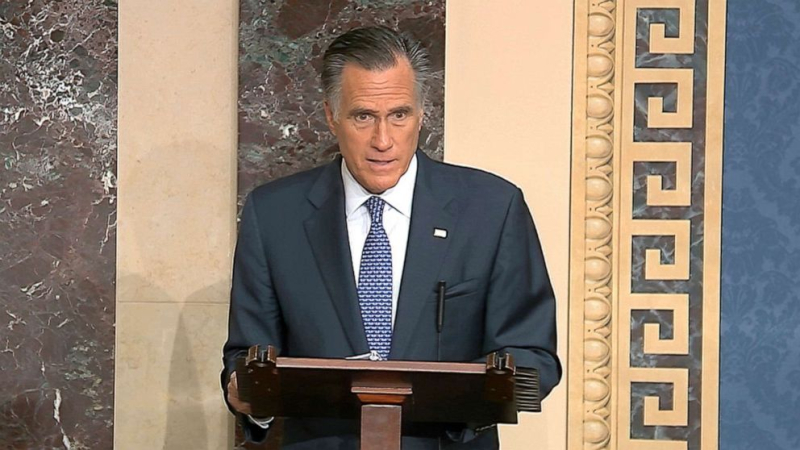 Senator Mitt Romney was the only Republican with the courage to stand up to Donald Trump on Wednesday.  (pic via abcnews.go.com)

Credit must also be given to Senator Doug Jones (D-Alabama) for his vote to convict Donald Trump.  Senator Jones is up for re-election this fall in a state that Trump overwhelmingly won in 2016.  He put his career on the line to do what's right for the country.  See, Republicans?  It's not impossible to do it, you just need to have a spine.

Now the country has to face the new danger that comes from an emboldened Trump who has been given a free pass by the Senate to solicit all the foreign interference in our elections that his corrupt soul desires, as well as whatever other misdeeds strike his fancy.  It's 2020 and accountability is dead.  RIP.

We're still waiting for the official results from Iowa, but it was clearly a good night in any case for Mayor Pete Buttigieg, who has a slight lead over Senator Bernie Sanders, and a bad night for Joe Biden, who finished a distant fourth.  Bernie Sanders still leads in New Hampshire, ahead of next week's primary, but Buttigieg is closing the gap.  However, it feels like Mayor Pete will need to win New Hampshire to have any chance of continuing, but even that may not be enough.  His campaign has shown a complete inability to connect with minority groups, and the political landscape changes dramatically once the primary calendar moves past the first two predominantly white states.

Amazon paid a 1.2% tax rate on $13 billion in profits last year.  That's outrageous.  Did you have a 1.2% tax rate in 2019?  We didn't.  Imagine the programs that could be properly funded if Amazon, and other large companies like them, paid their fair share.

Massachusetts car magnate Ernie Boch Jr. recently left a waitress a $5000 tip on a $157 bill as part of a viral tipping challenge.  Kudos to him for the generosity.  We admit, we didn't realize he's a billionaire.  They seem to be everywhere in the area.

The Mookie Betts trade to the Los Angeles Dodgers apparently hit a snag because the Boston Red Sox reportedly don't like pitching prospect Brusdar Graterol's medical records.  The teams are expected to find a solution, whether it involves another player or different financial considerations, but our dislike of this deal continues to grow.  Graterol and outfielder Alex Verdugo were an underwhelming return to begin with, and this doesn't help.  The Red Sox would have been better off keeping Betts for the final year of his contract and then trying to re-sign him as a free agent.  If he walked away at the end of the season, so be it, but the 2020 team is undoubtedly less competitive without him on the roster.  It's amazing how many Sox fans are swallowing the company line about the team needing financial flexibility this year.  This isn't about struggling revenues, it's about protecting ownership's already-strong profit margin.

Pete Rose is hoping the Houston Astros sign-stealing scandal is his way back into the majors.  Rose is petitioning Commissioner Rob Manfred to end his lifetime ban from baseball, saying it's a "vastly-disproportionate" punishment from how the Houston situation is being handled.  We'd argue Rose should still be banned.  While baseball has dealt with steroids problems and now this issue, in both cases, the players were cheating to have a better chance of winning.  Rose gambling on games while he was the manager of the Cincinnati Reds made it reasonable to wonder if he was trying to lose games to cover his bets.  That warrants him remaining on the outside looking in.

New York Mets fans were counting on their freedom from the Wilpon family coming in 2024, when Steve Cohen was expected to take over as majority owner of the team.  However, it doesn't look like that's going to happen:  Cohen announced he's backing out of the deal, because the Wilpons wanted to stay in charge longer.  Sounds about right.

For those of you who still need a football fix, the new version of the XFL begins on Saturday.  This seems like a gigantic waste of Vince McMahon's money, but let us know if you enjoy the show.

We're sorry to hear that legendary actor Kirk Douglas died yesterday at age 103.  Our condolences go out to his family and friends.

It sounds like Sam Raimi is preparing to take over as director of the Doctor Strange sequel.  That works.  Original director Scott Derrickson recently left the film after the standard "creative differences."   It sounds like that meant Derrickson was going for a more horror-based approach and got shot down.  Raimi, who directed Sony's first Spider-Man trilogy, seems like a good fit to replace him.

Apparently the Ray Donovan cast and crew were just as surprised as the fans to hear the show's been cancelled.  That has to be so frustrating when you think you'll have the ability to end your story the way you want, and then someone forces you to stop mid-sen...

NCIS: New Orleans announced Christopher Lasalle's replacement.  No spoilers, so you'll have to click on the link to find out who it is, but from what we've seen of the actor's work, our hunch is that this will do just fine.  The newest member of the cast makes his debut on the March 8 episode.

Okay kids, that's going to do it for now.  That shoveling ain't gonna take care of itself.  Today would have been Bob Marley's 75th birthday, and his estate is working on a year-long celebration of his life, so lets have him & The Wailers close things out with a new video for "Redemption Song," for today's, "Song of the Day."

Thanks for stopping by, everyone.  It was great to see you, as always.  It seems like the roads are going to be a mess for a while, so be careful out there if you have to drive.  Enjoy the rest of your day, be good, and we'll catch up with you again soon.  Until next time, that's today's Clearing out the Clutter, and we are outta here.