Welcome back!  Come on in, have a seat.  How are you?  Things are good here, although I have a little shoveling to do later today.  It got away from me a bit in the past couple of days.  There isn't a lot out there, but I think it's going to be heavy snow with a few ice hills, so that might be a little challenging.  BDH and Little Buddha said they'll watch from the window and cheer me on, so I'm sure everything will be fine.  (Also, before he comes back into the room, don't forget BDH's birthday is on Friday!)  Speaking of our dynamic duo, they're here with some coffee.  Grab yourself a nice medium DD, and let's clear out some Monday Clutter.

Senator Lindsey Graham says Attorney General Bill Barr is reviewing information about the Biden family given to him by Rudy Giuliani.  Since Donald Trump never got the corrupt investigation he wanted in Ukraine, he'll just have his lackey do it for him at home.  The corruption is right out in the open, and since the Senate gave Donald Trump a free pass, this will only continue to get worse until Trump is removed from office.  In the meantime, Trump's daughter and son-in-law, Barr's son, and Giuliani's son all continue to profit from working in this administration, but tell us how Hunter Biden is the problem.

(On a side note, we assume this obsession with Biden end the day the former VP drops out of the presidential race.  Trump and his supporters will suddenly "see the light" and decide there's nothing to investigate here.)

Donald Trump is proposing massive cuts to foreign aid and domestic safety net programs in his new budget.  The document has little chance of passing the House.  However, Trump is still making his scorn for the most vulnerable members of our society clear with his proposal to slash $2 trillion from programs like Medicare, Medicaid, and food stamps.  Don't worry, though, Trump is ready to extend the tax-cut giveaway that Republicans passed in 2017.  That's what class warfare looks like, friends.

When he's not busy going after the poor, Donald Trump passes the time fighting for the important causes in life like advocating for Pete Rose to be in the Baseball Hall of Fame.  It's one of Newton's lesser-known rules of physics at play here:  cheaters attract cheaters.

We're just a day away from the New Hampshire primary, and there seems to be more uncertainty than usual this year.  Senator Bernie Sanders leads in the most recent poll.   However, New Hampshire voters have a habit of rebelling against being told what to do by conventional wisdom, and given the large number of undecided voters that still remain, almost anything could happen.  We're keeping an eye on Senator Sanders, Mayor Pete Buttigieg, Senator Elizabeth Warren, and Senator Amy Klobuchar.

Buttigieg needs to win to project any sense of momentum, because the political landscape is about to get much worse for him as he leaves states that aren't at least 97% white.  Warren needs a strong showing in her neighboring state.  We were told time and time again that there are "three tickets out of Iowa," but it sure seems like the press stole Warren's ticket after her third-place showing.  It doesn't feel like it will be a good day for Joe Biden, and his voters may be looking for their second choice, who may be Klobuchar. 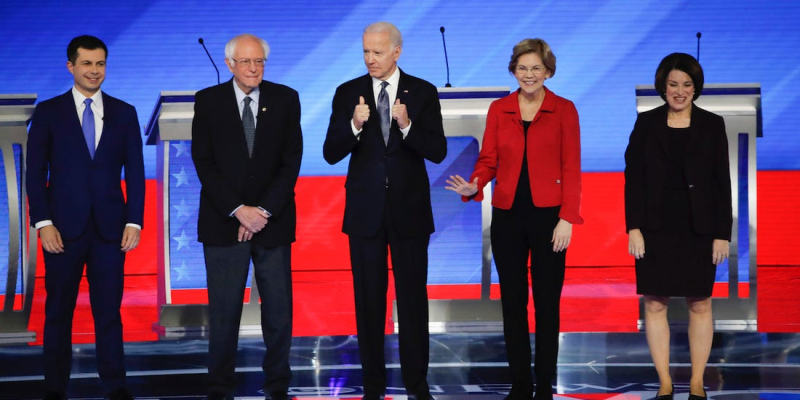 Who will have a good day in the Granite State tomorrow?  (pic via businessinsider.com)

As Joe Biden struggles, his support with black voters in South Carolina appears to be disintegrating.  Is this Tom Steyer's chance to become relevant?  If Biden can't protect his lead in this state, look for his campaign to likely be over at the beginning of March.

Here we go again:  The Boston Red Sox worked out a new deal to send Mookie Betts and David Price to the Los Angeles Dodgers.  This time, the trade is just between the two teams, and the Sox will get outfielder Alex Verdugo (who sounds like a piece of garbage), shortstop Jeter Downs, and catcher Connor Wong.  That's right, Sox fans, the team wants you to root for a guy named after Derek Jeter.  Downs will clearly have to move to second base, because Xander Bogaerts isn't going anywhere.   All of the medical records have been cleared this time, and the trade is apparently waiting for MLB to sign off on the Sox also sending the Dodgers $48 million to cover half of David Price's contract.

In the end, the return is a little better than the first attempt, but the move was still a mistake.  The Red Sox also now have a large hole in their starting rotation, as pitchers and catchers report to Fort Myers this week.  At least the team saved some money though, so we don't have to worry about them going into bankruptcy or something.  Phew.  Best of luck to Mookie Betts, who we expect to have a dominant year in Los Angeles.  We'll have to find the Vegas odds on him being the 2020 NL MVP.  Oh, he's the current favorite.  That sounds about right.

Isaiah Thomas was released by the Los Angeles Clippers on Saturday and is now a free agent.  How would Boston Celtics fans feel about IT coming back to town as a back-up?  The point guard would be a good fit for the team, and it seems like he'd get a hero's welcome.  Any objections?

Congratulations to Parasite for becoming the first non-English-speaking film to win best pictures at the Oscars last night.  How do you feel about that and the rest of the winners?

It seemed like Robert Downey Jr. was born to play Tony Stark in the MCU, but Downey's second choice for a role he would like to have played is probably not one you'd expect.  We think things worked out just fine in the end.

Okay kids, that's going to do it for now.  This tune's been following us around for the last few days, so let's enjoy it together to kick off the new week.  Here's Jimmy Eat World with a live version of, "The Middle," for today's, "Song of the Day."

Thanks for stopping by, everyone.  It was great to see you, as always. Enjoy the rest of your day, be good and we'll catch up with you again soon.  Until next time, that's today's Clearing out the Clutter, and we are outta here.