Welcome back, and a happy Friday to you all!  Well, it's a freezing rain kind of Friday, but it is Friday, so that still counts.  I stayed on top of the shoveling yesterday, which was good.  However, a big pile of snow fell off the roof and onto the driveway last night, and now I think it might be a mountain of ice.  BDH and Little Buddha say the temperatures should be just above freezing later this morning, so maybe that will help.  In the meantime, let's see what's going on in the world.  The guys made coffee, so grab yourself a nice medium DD, because it's time to clear out some Clutter.

Festivus came early for Donald Trump, as he unleashed an unhinged airing of grievances during a White House speech yesterday. Seriously, these were the remarks of a man in need of some help.    Republicans who claimed to be offended by Democrats asking them to obey their oaths of office during Trump's impeachment trial, were silent as Trump went on one inappropriate tangent after another and dropped a "bullshit" into his remarks.  The man was born on third base, and not only does he think he hit a triple, he's spent his entire life complaining how he's been screwed out of a home run and team ownership. 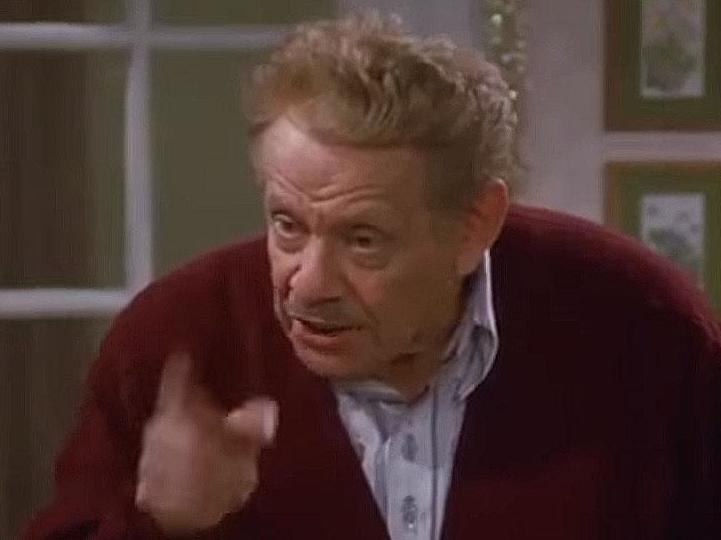 Donald Trump has a lot of problems with you people, and now you're gonna hear about it.  (pic via independent.co.uk)

Now that his impeachment trial is over, Donald Trump is looking for payback.  Considering the green light his accomplices in the Senate just gave him, there's no telling how far he'll go to punish his opponents as he further denigrates our democracy.  This man-child has to be removed from office in November, because the United States won't survive four more years of this nonsense.

On a related note, the Treasury Department gave Republican senators sensitive information about Hunter Biden's finances, in stark contrast to their refusal to turn over Donald Trump's tax returns.

Donald Trump doesn't care that everyone knows his State of the Union speech was dishonest.  That's just another day in the life for the Great Pumpkin.  What will drive him nuts is that the TV ratings dropped 20%.

Quick quiz:  Who do you think had better job growth during their first three years in office:  Barack Obama or Donald Trump?  We'll just give you the answer:  Obama had a 19% better growth rate than Trump, despite the Great Pumpkin's claims of unmatched greatness.

The Department of Homeland Security is blocking New York residents from participating in programs expediting international travel.  It's a punishment for the state's new law allowing undocumented aliens to get driver's licenses and preventing federal immigration officials from looking at their Motor Vehicle Registry records.  It appears that the crew that always yells about protecting "states rights" is only talking about defending white people.  Who could have guessed?

Seven Democratic presidential candidates will debate tonight, just a few days before the New Hampshire primary.  There are several things to watch for this evening:  Bernie Sanders needs to slow down Pete Buttigieg's momentum; Elizabeth Warren needs to find a way to build off her third place finish in Iowa; Joe Biden needs to show he's still relevant; and the rest of them need to give voters a reason to even think about them as options.

Andrew Yang's campaign has reportedly fired dozens of staffers after his poor showing in Iowa this week.  Campaign representatives say the layoffs were always part of the plan after the caucuses concluded.  However, the political landscape doesn't look much better for him in New Hampshire next week, so keep an eye out for further cutbacks.

The newly merged ViacomCBS will throw its hat into the streaming wars with a service that combines the assets of both companies.  The specifics have apparently not been finalized, but their library includes CBS All Access, as well as Pluto TV, Nickelodeon, BET, MTV, Comedy Central and Paramount Pictures, so they've got plenty to work with here.

Twitter's quarterly numbers missed on profit margin, but they beat user growth and revenue, so investors sent the stock up 15% on Thursday.  Imagine how well they'd respond if the site had an edit feature.

Apple Maps just came out with a redesign, and now Google Maps is doing the same thing in March.  It sounds like the maps app will have all sorts of useful new features.  However, we still don't want to install it, because who needs to give Google even more access to the information on your phone?  We'll see if any of the upgrades also apply to the website.

The first supermoon of the year is this weekend, so make sure you catch a glimpse.  Those things are always impressive.

The bad news continues for WWE in 2020.  First they fired both of their co-presidents with little explanation, and now they're warning investors about "considerable uncertainty" regarding their future.  The longtime dominant United States wrestling company is losing their audience both domestically and around the world.  The stock is down over 30% for the year, and investors have reason to ask if it's finally time for change in leadership.

The Boston Red Sox still haven't finalized the Mookie Betts trade because of concerns regarding the medical records of pitching prospect Brusdar Graterol.  Apparently Graterol can't even be considered a likely starting pitcher at this point.  Rather than try to rework the deal, the Red Sox should take this holdup as a sign from above that they should walk away from the table and pretend this discussion never happened.

The NBA trade deadline came and went yesterday without the Boston Celtics making any moves.  How do you feel about that, C's fans?  In Danny Ainge, we trust?

Birds of Prey is getting good reviews.  Anyone want to take a trip to the movies?

We thought this might be a fan-made trailer at first, but it turns out it's legit:  The Big Lebowski's Jesus Quintana is getting his own movie called, The Jesus Rolls, and it's got an amazing cast that includes John Turturro, Susan Sarandon, Jon Hamm, Audrey Tautou, Michael Badalucco, Sônia Braga, and Bobby Cannavale.  (What do you think the odds are of a surprise Jeff Bridges cameo?)  Check this out:

The music tour announcements continue.  This time, it's the Rolling Stones releasing the dates for their 2020 trip around North America.  It's amazing how these guys just keep going and going.

Okay kids, that's going to do it for now.  Guitar virtuoso Joe Satriani has a new album called "Shapeshifting" coming out on April 10, so let's have him close things out with the first single.  Here's, "Nineteen Eighty," for today's, "Song of the Day."

Thanks for stopping by, everyone.  It was great to see you, as always.  Oh, while we're thinking of it, there may be a slight programming schedule change.  We probably won't be able to join you on Sunday, so we'll be back either tomorrow or Monday.  In any case, enjoy the rest of your day, be good, and one way or the other, we'll catch up with you again soon.  Until next time, that's today's Clearing out the Clutter, and we are outta here.