Welcome back, and a happy Friday to you all!  In case you haven't heard, this is a big day here, because it's BDH's birthday!  That's right, our little blue buddy came into our lives nine years ago today.  He was brought by a friend, who to this day has no idea what an impact she had with her gift, and life at Clutter Headquarters has never been the same.  Little Buddha has been with me for almost 30 years, but his grin got a little wider when BDH joined us, and there's nothing he likes better than hanging out with his pal .  We plan on celebrating all day, and don't say anything, but there may be some cookies later in the day.  I asked BDH what he wanted for a present, and he said he just wanted to hang out everyone.  Buddha's been singing "Happy Birthday" to him all morning, so I had coffee duty.  Grab yourself a nice medium DD, and let's clear out some Clutter.

Attorney General Bill Barr criticized Donald Trump in an interview with ABC News on Thursday, saying Trump's tweets, "“make it impossible for me to do my job.” Some will say this is a stunning display from a current member of the administration.  Others will argue it's a cynical move designed to give the false impression that Barr acts independently of Trump.  That's an impression Barr desperately needs to present after the recent fallout over the DOJ intervening in the sentencing of Trump crony Roger Stone.  If Barr isn't fired by Trump in the next 24 hours, you can bet the house on the latter. 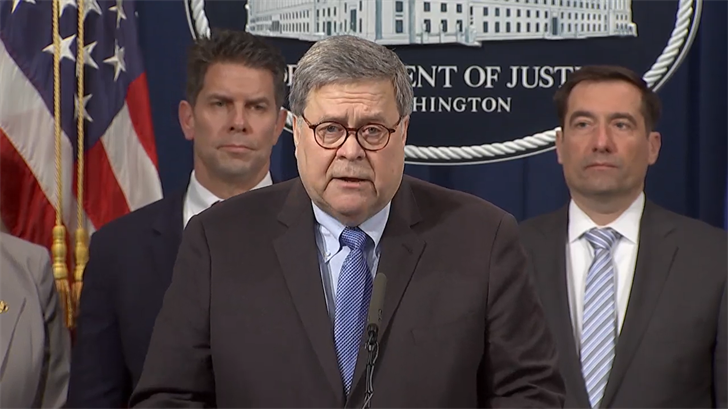 Once a lapdog, always a lapdog.  (pic via ktvn.com)

Meanwhile, former White House Chief of Staff John Kelly is trying to rehabilitate his image by reinventing himself as a Trump critic.  General Kelly has recently gone against Trump on immigration, Lt. Colonel Alexander Vindman, and Trump's actions in Ukraine.  He's not wrong on any of it, but it's too little, far too late.  He had more protection than just about anyone when he was in the White House, and he should have spoken out then.  He should forever live with the shame of carrying out the administration's plans to kidnap immigrant children.

Donald Trump now admits sending Rudy Giulaini to Ukraine to dig up dirt on the Biden family, after denying it during the impeachment process.  There's no reason for the Great Pumpkin to lie about it anymore, since Senate Republicans told him he can do whatever he wants without fear of repercussions.

Donald Trump is now threatening New York unless the state drops their lawsuits against him and his administration.  This is the blatant quid pro quo corruption Democrats warned about during the impeachment trial.  Now that he's been given a get out of jail card, Trump feels free to abuse his office to extort anyone he likes for his own gain.

New Boston Red Sox outfielder Alex Verdugo might miss Opening Day because of a back injury he's been dealing with since August.  You know who didn't have a back injury?  Mookie Betts.

Boston Red Sox second baseman Dustin Pedroia will miss at least the beginning of spring training, due to ongoing soreness in his surgically-repaired left knee.  That's unfortunate, although not surprising.  The Red Sox have to assume they'll need someone else at the position this year.  If Pedroia somehow finds a way to return, it would be a nice surprise.

The Houston Astros continue to be one of the most dislikable organizations in sports these days.  They held a press conference to talk about their cheating scandal yesterday, but the message from owner Jim Crane was, “Our opinion is this didn’t impact the game. We had a good team. We won the World Series and we’ll leave it at that.” In other words, they take no responsibility at all for breaking the rules.  Also, of course it impacted the game.  A team wouldn't do what the Astros acknowledge doing if it wasn't going to impact the game.  The whole point of doing press conferences like this is that you're trying to put a bad story behind you.  Houston's performance yesterday did nothing but make sure people will continue to talk about their scandal in the weeks and months to come.

Cleveland Browns defensive end Myles Garrett was reinstated by the NFL yesterday, following his suspension last year for a fight against the Pittsburgh Steelers, where Garrett ripped quarterback Mason Rudolph's helmet off and hit him in the head with it.  Garrett still insists that Rudolph started the fight by calling him the "N-word."  Rudolph denies the claim.  Not that the accusation would excuse what Garrett did, but it's interesting that the NFL mysteriously couldn't find audio to confirm or disprove it, and why was Rudolph fined $50,000 for his role in the fight?  People got worked up about the Super Bowl halftime show for not being "family-friendly"  because Shakira and Jennifer Lopez showed some skin.  Violence and racism, on the other hand, are apparently fine.

Are you ready for the first sneak peak of what Robert Pattinson looks like as Batman?  Check this out:

Okay kids, that's going to do it for now.  The birthday party will continue all day, so let's have Kool & the Gang close things out with, "Celebration," for today's, "Song of the Day."

Thanks for stopping by, everyone.  It's always great to see you.  BDH and Little Buddha want you to know you're welcome to come back anytime later today to enjoy the festivities some more with them.  Otherwise, enjoy the rest of your day, be good, and we'll catch up with you again soon.  Until next time, that's today's Clearing out the Clutter, and we are outta here.