A Call to Action

A few quick thoughts, now that it's finally time for voters to weigh in on the Democratic presidential primary:

Of course removing Donald Trump from the White House, and stripping Mitch McConnell of his majority leader title, are the priorities this November. However, that's not enough.  In fact, it's the bare minimum of what we should be trying to achieve with this election.  While pre-2016 may seem like paradise compared to the present day, let's not drown our memories in whitewashed nostalgia.  That government left many problems unaddressed or gave them halfhearted approaches at best, to the detriment of millions of Americans.  We don't need minor tweaks, we need a significant course correction that will put the United States on a path that more closely aligns with our rhetoric.  Business leaders will often say that a crisis is the best time to make major changes.  We are in a crisis, friends.  Let's take advantage of that opportunity.

Let's change the laws and regulations that leave Millennials drowning in student loan debt.  They're crushed by a burden that makes aspects of the American dream, like home ownership, a fantasy.  It's also well-past time to make college and other higher education opportunities more affordable for our current and future students.  The opportunity for further learning can't be confined to a privileged few. We need a well-educated population to thrive in the 21st century.

Let's fix our health care system to both improve access and lower costs.  As important as it is to keep this administration from further damaging the Affordable Care Act (ACA), the ACA was never the final goal of health care reform.  No one loves their insurance plans, they like their providers (if they're able to find one in the first place.)  We need a system which actually keeps people healthier longer without leaving them one surprise bill away from bankruptcy.

Let's implement comprehensive criminal justice reform.  We have the highest incarceration rate in the world, but it does nothing to keep us safer. It does however enrich many, including those who operate private prisons.  Our current system is focused on punishment with not nearly enough energy directed to rehabilitation.  Given its dehumanizing nature, we can't be surprised when there are issues with recidivism.  We must eradicate the system which promotes racial discrimination and distracts us from the major criminals in this country.

Speaking of which, let's hold Wall Street accountable and demand companies both treat their customers fairly, pay their fair share in taxes, and stop demanding bailouts.  It's unacceptable to have a company like Amazon pay a 1.2% tax rate on $13 billion in profits.  Uber-wealthy individuals must also finally contribute equally to the costs of running the society that has benefited them so much for so long.  The richest three families in America have more wealth than the bottom half of the country.  That's a moral failure.  It's time for 99% of the country to send a clear message to the remaining 1%:  Enough is enough.

There will be those who yell and scream about the costs.  If we can find the money to remain in a perpetual state of war around the world for decades, we can find the money to improve our country.  It's not about dollars, it's about priorities.   As voting gets underway, let's aim high and set the United States on a path to true opportunity and equitable prosperity for all.

Let's not act out of fear, let's listen to our better angels and take this opportunity to launch a new age for the United States that we can be proud of for generations to come. 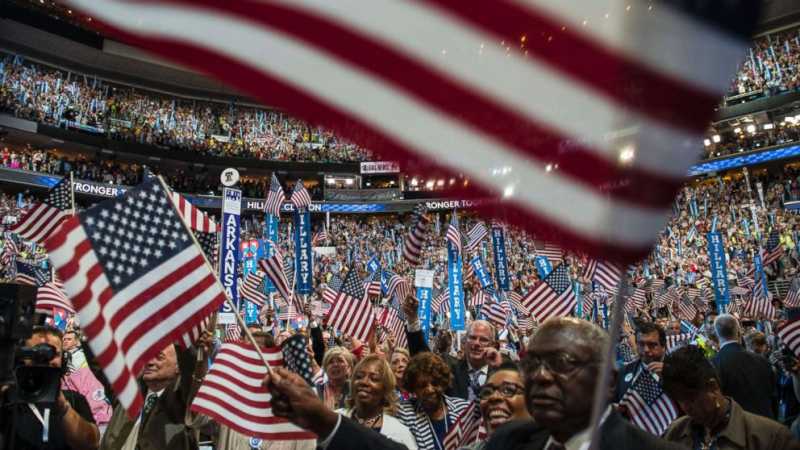 We can do this.  (pic via abcbnews.go.com)