Welcome back.  How are you?   Does January seem to be going by quicker than usual for anyone else, or is it just us?  I see there's new snow on the driveway, but it doesn't look like it's going to require much shoveling.  BDH and Little Buddha saw a group of runners go by here while it was still dark outside.  Well, they mostly saw the runners' head lamps more than anything else.  They asked if I ever consider going out for a morning jog, which made me laugh.  They also asked if we were ready for some coffee.  I took the liberty of saying yes for everyone, so they put a fresh pot on the table.  Grab yourself a nice medium DD, and let's clear out some Wednesday Clutter.

Iran fired a number of missiles at two Iraqi bases that house U.S. soldiers last night in retaliation for the assassination of Qasem Soleimani last week.  It doesn't appear that there were any American casualties, and the reports are unclear about possible Iraqi deaths.  In any case, we appear to be inching closer to war with Iran for no apparent reason, other than Donald Trump doesn't want people focusing on his impeachment.  Trump couldn't be bothered to speak to the public after last night's attack, choosing instead to hide behind this idiotic tweet:

"All is well! Missiles launched from Iran at two military bases located in Iraq. Assessment of casualties & damages taking place now. So far, so good! We have the most powerful and well equipped military anywhere in the world, by far! I will be making a statement tomorrow morning."

A quick tip to the Great Pumpkin - when countries are shooting missiles at American troops, all is not "well."  What we would give for a GOP that wasn't corrupt to the core right now. 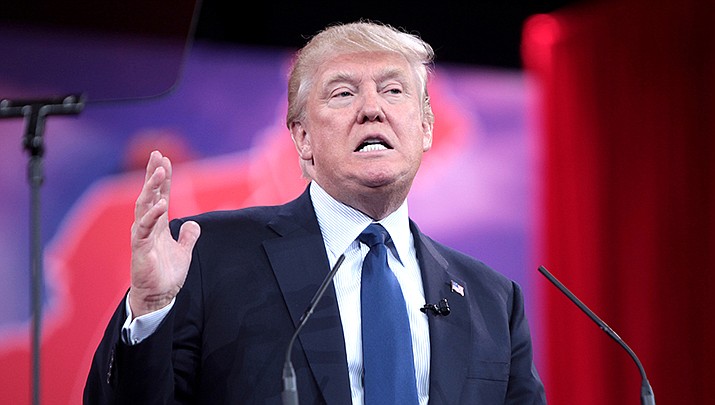 Has no idea what he's doing.  (pic via kdminer.com)

Unfortunately, that option is still not on the table, as Senate Majority Leader Mitch McConnell has the votes to start the impeachment trial without first deciding whether not not to call witnesses.   Republicans will claim they're just following the precedent of Bill Clinton's impeachment trial, but the major difference is that the Senate majority leader at the time hadn't already said there would be no sunlight between his position and the president's and hadn't made it crystal clear that the fix was in.   It would only take four Republican senators to join Democrats to compel witnesses, but good luck finding even one with a backbone.

It's awful to hear that Puerto Rico was hit by another major earthquake and aftershock yesterday.  What makes it even worse is that we assume Donald Trump will once again abandon these Americans because of the color of their skin.

We're also saddened by the news that Prozac Nation author Elizabeth Wurtzel died from her battle with breast cancer.  Wurtzel was 52 years old.

A new study suggests no statistically relevant connection between using talcum powder and ovarian cancer.  There are limitations to the study, including sample size and the use of only white women as subjects, and we also can't help wondering if Johnson & Johnson had any influence here.

The Boston Red Sox are now apparently being investigated by Major League Baseball over accusations of sign-stealing via video in 2018.  Two thoughts:

1) You know we love the Sox, and much like the steroid scandal, concerns about this kind of cheating are rampant throughout baseball - it's not just Boston and the Houston Astros involved here.  However, we will have no problem if MLB decides to throw the book at both teams in order to send a clear message that this kind of behavior will not be tolerated.  We obviously don't support cheating anyway, but concerns about cheating have also led to longer games, which is a major problem.  Our average departure time from Fenway Park last year was somewhere around 11:45 p.m., and that's insane.  Let's speed it up, guys, we need our beauty rest.  If that means the Sox take it on the chin this year, so be it.

2) The Boston Globe's Peter Abraham has a simple way to stop this kind of rule-breaking:  take away the video.

The annual New England Patriots assistant coaching turnover has begun, but Josh McDaniels isn't the one on the move (yet.)  The New York Giants have reportedly decided to hire Patriots wide receivers coach and special teams coordinator Joe Judge to be their next head coach.  That feels like a surprise.

Meanwhile, Matt Ruhle will apparently be the next Carolina Panthers coach.  Ruhle is reportedly getting a 7-year/$60 million deal.  As we ask when players get long-term contracts like this - what are the odds Ruhle will be a good fit for the team for that long?  When you're printing money like the NFL owners, you can afford to roll the dice.

Now that the Giants and Panthers have their guys, does it come down to the Cleveland Browns or bust for Josh McDaniels?  Does that influence Tom Brady's own decision about his future at all?

Is Anthony Davis already looking at leaving the Los Angeles Lakers?   After all, he turned down a 4-year/$146 million max extension yesterday so he can hit the free agent market this summer.  However, he's apparently expected to stick with Los Angeles and is just waiting for the time when he becomes eligible for a five-year / $202 million deal this summer.  Yeah, we'd hold off on signing a new deal too.

There's a new Doctor Who comic out that features the tenth and thirteenth Doctors joining forces.  That pairing would also make for some terrific television, or at least an audio adventure from Big Finish.

NBC's "One Chicago" programs  finally return tonight.  It's time to take a break from the Chicago Fire reruns and get back to the current storylines across the shows.  We're also intrigued that a character is returning to Chicago P.D. in February.

We're sad to hear that Silvio Horta was found dead in a Miami hotel room yesterday from what is believed to be a suicide.  The Ugly Betty creator was only 45 years old.

Good for Metallica for pledging $750,000 to help fight the horrific Australia fires.  If you'd like to make a donation, here are a couple of options.

Okay kids, that's going to do it for now.  We've been humming this tune ever since a good friend mentioned it on Facebook yesterday, so you should join in on the fun.  In Kate's honor, here's Madonna to close things out with, "Borderline" for today's, "Song of the Day."

Thanks for stopping by, everyone.  It's always a treat to hang out with you.  BDH and Little Buddha say of course you're welcome to come back late to watch the "One Chicago" shows with us.  If you feel like bringing some snacks, that would be great.  Otherwise, enjoy the rest of your day, be good, and we'll catch up with you again soon.  Until next time, that's today's Clearing out the Clutter, and we are outta here.