Welcome back!  How are you?  We're all fine at the moment.  The forecast called for a chance of some snow showers last night, but that apparently didn't happen, so there's no shoveling to deal with this morning, which is nice.  However, there is a lot of running around on today's to-do list before tonight's new "One Chicago" episodes, so let's get down to business.  BDH and Little Buddha say the coffee is ready, so grab yourself a nice medium DD, because it's time to clear out some Wednesday Clutter.

As expected, the Boston Red Sox fired manager Alex Cora yesterday, just a day after he was revealed to have played a central role in the Houston Astros sign-stealing scandal of 2017 and because it seems clear a similar determination will be found re: the 2018 Sox team.  It's disappointing, because Cora seemed to be a great fit in Boston.  He understood the pressures of the market, related well to his players, and was adept at the usage of all of the data today's managers are expected to process on a daily basis.  This should have been a long-term relationship.

However, the team had no other option here.  Cora is looking at a minimum of a one-year suspension for his actions, and it will likely be longer than that.  The Sox can't wait that long, so now they need to do a late managerial search.  As we said yesterday, current bench coach Ron Roenicke seems like the obvious choice for this year (as long as he wasn't also involved in the scandal.)  If it's not him for some reason, we hope the team hires someone with managerial experience.  Between the cloud of this story hanging over everything, and the presence of a first-time GM, the Red Sox need someone who already knows what they're doing in this role. 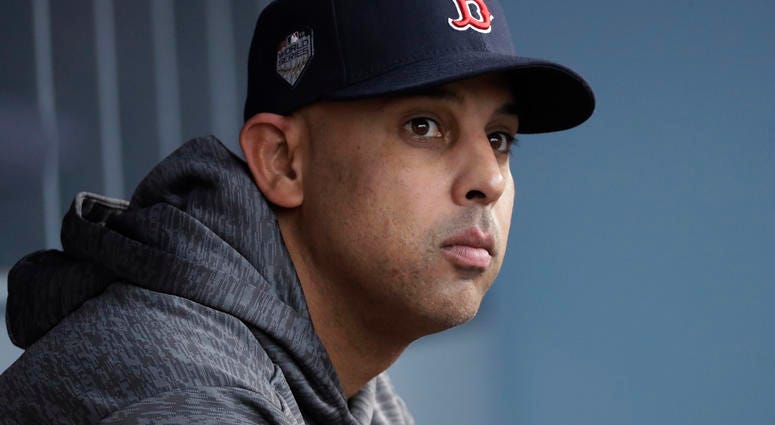 A disappointing end to what should have been a longer run.  (pic via wben.radio.com)

Will New York Mets first-year manager Carlos Beltran make it to the start of the season, in light of the sign-stealing scandal?  While he wasn't punished by MLB, Commissioner Rob Manfred made it clear that Beltran was just as important as Alex Cora in this story.  This mess has already cost A.J. Hinch and Cora their jobs, so what are the odds that Beltran survives?  Do the Mets want to deal with this mess all year?  We'll say there's a 65% chance Beltran is gone before Opening Day.  What's your bet?

The House is expected to vote to transmit the articles of impeachment against Donald Trump to the Senate and name the trial managers later today.  It looks like the main portion of Trump's trial will begin next Tuesday.

Senator Elizabeth Warren used last night's Democratic presidential debate to put a bright spotlight on an underlying concern in this race: would sexism prevent a woman from beating Donald Trump this fall?

Senator Tim Kaine (D-Virginia) says he has the votes to pass his resolution limiting Donald Trump's war powers regarding Iran.  If that version is approved by both the House and Senate, it would carry the force of law.  Trump would likely veto it in about 30 seconds, but at the very least, perhaps it might remind him that he's not a king and needs to talk to Congress about military use.  Or maybe he'll just rant on Twitter about disloyal Republicans and how he's being treated unfairly.

35-year-old Jonny Kim is a Navy SEAL, a Harvard Medical School grad, and now he's  an astronaut.  Other than that, he hasn't done all that much with his life, but hey, there's still time to find a career.  Anyone else here feeling inadequate at the moment?  BDH and Little Buddha are here to reassure you that you're all rock stars.

Wells Fargo had a bad fourth quarter report, so let's start the countdown until the next scandal about the bank taking unethical/illegal measures to make up for these poor results.  They may have a new CEO, but there's no reason to believe they've seen the light on proper business practices.

Are dating apps a security risk?  That's what some officials warn.  It's not really our scene anyway, but giving any company so much identifiable personal information is asking for trouble in today's world, especially if you're someone who already might draw the interest of a hacker/government.  Yes, we know, we've already done it with Facebook, among other companies, but why increase your exposure even further?  No thanks.

Carolina Panthers linebacker Luke Keuchly announced his retirement from the NFL yesterday.  Keuchly is only 28 years old, and he didn't give a specific reason for leaving, but whether it was health-related or something else, good for him.  He had a tremendous career (seven Pro Bowls in eight seasons), but he's also a young man with a long life still in front of him, so we wish him the best with his future endeavors.

The Minnesota Twins are reportedly signing third baseman Josh Donaldson to a four-year/$92 million deal.  The 2015 American League MVP had a nice comeback year in 2019 after being a shell of his former self because of injuries the previous two seasons.

No spoilers here, but congratulations to the winner of the Jeopardy! The Greatest of All Time tournament.

Talk to us, DC Comics fans - how did you feel about the conclusion of the Crisis on Infinite Earths crossover event?

Okay kids, that's going to do it for now.  Here's George Michael to close things out with a live rendition of, "Father Figure," for today's, "Song of the Day."

Thanks for stopping by, everyone.  It was great to see you, as always.  BDH and Little Buddha want to make sure you know you're welcome to come back to watch the "One Chicago" shows with them.  If you feel like bringing some snacks with you, that would also be terrific.  Otherwise, enjoy the rest of your day, be good, and we'll catch up with you again soon.  Until next time, that's today's Clearing out the Clutter, and we are outta here.