Welcome back!  How are you?  I was a bit of a mess yesterday.  Two nights of poor sleep makes things ugly around here.  It got to the point that BDH and Little Buddha urged me to take a nap near the end of the day before I had a full-on tantrum.  I set my alarm for 15 minutes but ended up hitting the snooze button so many times, it was more like two hours.  There was some concern I might then not be able to get to sleep for the night, but that ended up not being an issue.  Fast-forward seven hours later, and I'm ready to tackle today's to-do list.  First item - let's check out the headlines.  The guys made coffee, so grab yourself a nice medium DD, because it's time to clear out some Tuesday Clutter.

House Democrats are expected to transmit the articles of impeachment against Donald Trump and name the trial managers as early as today.  At this point, Senate Majority Leader "Moscow Mitch" McConnell still appears determined to cover for Trump's corruption and rubber-stamp an acquittal as quickly as possible.  He hates being distracted from his only real concern, which is confirming conservative federal judges.  The White House supposedly believes that at least four Republican senators will vote in favor of allowing witnesses at Trump's impeachment trial.  We're suspicious of any story that's based on people like Mitt Romney and Susan Collins having a backbone, but we'll see what happens.

Senate Republicans are in the bag for Donald Trump, but even they won't agree to his call for a dismissal of the impeachment charges against him.

Russian spies apparently hacked the Ukrainian natural gas company at the heart of Trump's impeachment.  Vladimir Putin will do whatever he can to protect his investment in the White House occupant.

Senators Elizabeth Warren and Bernie Sanders have done a good job so far of not attacking each other during the presidential primary.  They're the only two strong progressives in the race, and either one will eventually need the other's supporters to have any chance of winning the Democratic nomination.  However, the Iowa caucus is only about three weeks away, so the stakes are getting higher and that truce is fraying, as the Warren camp accused Sanders of saying a woman can't win the White House during a 2018 meeting between the two candidates.

We believe the story.   Democrats as a group are worlds better than Republicans on matters of gender, but there's still a strong current of anti-female presidential candidate views running through the party.  The question we have now is, will whichever candidate who loses this fight eventually do the right thing and convince their voters to support the other one?  We can't afford to have bruised feelings cause part of this voter bloc to check out of the race.  That leads to either an eventual Democratic nominee who won't deliver anything but small changes that don't help most struggling Americans, or worst case scenario, another term for Donald Trump, and that can't be allowed to happen. 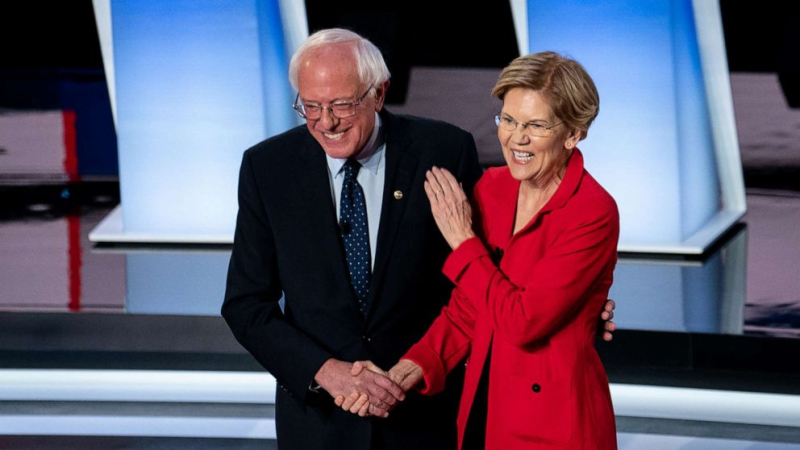 How do progressives get through this fight without devouring each other?  (pic via abcnews.go.com)

With all of that going on, tonight's Democratic debate should be fascinating to watch.

Major League Baseball suspended Houston Astros general manager Jeff Luhnow and manager AJ Hinch for a year yesterday because of the team's sign-stealing cheating scandal in 2017.  The two men were subsequently fired shortly after the announcement.   No punishment was handed down yet for Alex Cora, because MLB is still investigating the Boston Red Sox.  However, it's clear that Cora is seen as a central figure in both stories, and he is likely to be hit hard by Commissioner Rob Manfred.  It has to be more than Luhnow and Hinch's punishment since Cora is likely a multiple offender, and we wouldn't be surprised if a lifetime ban is under consideration.

One way or another, the Red Sox will also be under pressure to follow Houston's lead and fire Cora.  Given how close we are to spring training, the most likely immediate replacement would be current bench coach Ron Roenicke, who had a .508 winning percentage as the Milwaukee Brewers manager from 2011 to 2015.  It would be easy to see Roenicke carrying the interim manager title this season while the Red Sox try to recover from the scandal.  In any case, this is disappointing, but we said before that MLB would have to come down hard here, and that's what they're doing.  However, let's not assume this is the entire story.  First baseman Logan Morrison says Houston and Boston aren't the only two teams breaking the rules this way.  (Hello New York Yankees and  Los Angeles Dodgers.)

New England Patriots safety Patrick Chung's drug possession charge was conditionally dismissed yesterday.  He basically has to stay out of trouble for two years, submit to periodic drug testing, and do 40 hours of community service.

Pearl Jam announced they have a new album coming out on March 27.  That should make a number of people we know happy.  The band also announced a 16-date North American tour for March and April, but we assume that won't be it for the year.

Okay kids, that's going to do it for now.  Let's have Pearl Jam close things out with a great live rendition of, "Rearviewmirror" for today's, "Song of the Day."

Thanks for stopping by, everyone.  It was great to see you, as always.  BDH and Little Buddha say you're welcome to come back tonight to watch either the Democratic debate or more Chicago Fire reruns with them (or both, really) if you like.  Otherwise, enjoy the rest of your day, be good, and we'll catch up with you again soon.  Until next time, that's today's Clearing out the Clutter, and we are outta here.