Welcome back!  Come on in, have a seat.  What's new?  I'm just trying to figure out today's to-do list.  Yesterday involved all sorts of running around, but today should be a little more relaxed, which is nice.  Someone needs to do some cleaning around Clutter Headquarters.  I asked BDH and Little Buddha if they wanted to do it, but they just smiled and left the room.  I guess that's a no.  However, the guys did come back with coffee, so that's a fair trade.  Grab yourself a nice medium DD, and let's clear out some Thursday Clutter.

Indicted Rudy Giuliani associate Lev Parnas gave a bombshell interview to Rachel Maddow last night, where he made it clear that his work in Ukraine was done with the full knowledge of Donald Trump, and that it was all about investigating Joe Biden and his family. Parnas also said Vice President Mike Pence, Attorney General William Barr and Representative Devin Nunes were all "in the loop."   The interview comes immediately on the heels of the articles of impeachment against Trump being sent to the Senate.

It's once again clear that any fair trial must include witnesses, so of course Senator Rand Paul (R-Kentucky) is threatening his colleagues not to vote for them.  If the GOP wasn't so corrupt, they'd remove Trump immediately.  Well, if they weren't corrupt to the core, they would have done that years ago.

Lev Parnas has also turned over evidence to the House which included text messages implying that Donald Trump's goon's were stalking former Ambassador to Ukraine Marie Yovanovitch, and that there may have been threats against her.  Was Trump getting ready to approve a hit if he didn't get what he wanted out of Ukraine?  His long-standing mob ties are well-documented, after all.  No wonder Trump wants the trial dealt with as soon as possible.  His crimes will only be further revealed the longer this goes on.  This is what Rand Paul and the rest of the Republicans lackeys are defending. 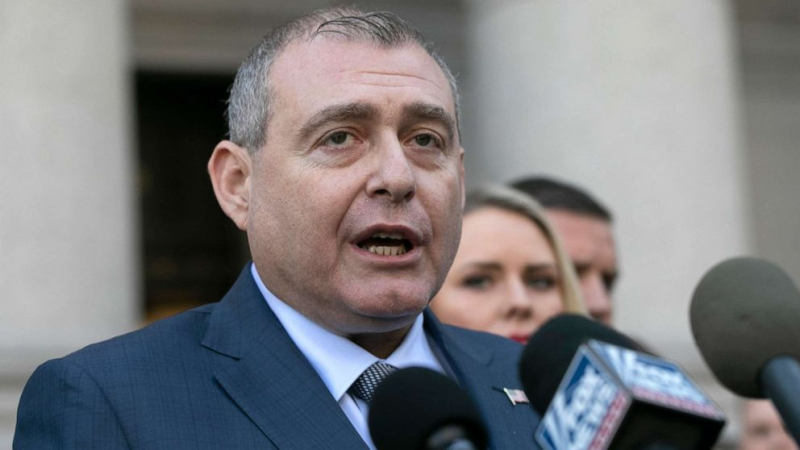 The more Lev Parnas speaks, the worse it gets for Donald Trump.  (pic via abcnews.go.com)

Donald Trump isn't done with his war on household appliances.  First it was toilets, and now the Great Pumpkin is angry at refrigerators and dishwashers.  The guy who controls the country's nuclear weapons is obsessed with people having to flush or wash their dishes 1o times in a row.  Nothing worry about here, folks.

A new lawsuit claims Jeffrey Epstein was trafficking underage women to his private island as recently as 2018, and that some of his alleged victims were as young as 12 years old.

It's disappointing that the Top of the Hub restaurant in Boston will be closing on April 18.  Located at the top of the Prudential Center, the restaurant provided an unmatched view of the city.

We watched a good portion of the Boston Red Sox press conference regarding the firing of Alex Cora yesterday, and ownership and management seemed to be pushing the notion pretty hard that the 2018 team will be exonerated.  The message was repeatedly stressed that Cora was only fired because of his activities in Houston in 2017, and that fans should "reserve judgement" about the Red Sox until MLB's investigation is completed.  John Henry and Tom Werner must feel pretty confident about that, because they have to know they're going to be blasted if that's not what the report says.

In on-the-field news, the Red Sox traded Sam Travis to the Texas Rangers for lefty pitcher Jeffrey Springs yesterday.  Springs has a 4.90 ERA in 43 career appearances.  We're going to be leaning much harder than usual on this year's Red Sox media guide when we get to spring training.

We're sorry to hear that former pro wrestling star Rocky "Soulman" Johnson died yesterday.   He is best known today for being the Rock's father, but Johnson had a long and heralded career of his own.  Johnson starred in wrestling territories across the country from the late 1960's to the early 199o's, and he and Tony Atlas became the first African American WWE tag team champions in 1983.  He was originally adamant about his son not joining the wrestling industry.  However, he eventually gave in, helped trained Dwayne, connected him with the WWE, and the rest is history.  Rocky Johnson was 75 years old.  Our condolences go out to his family, friends, and fans.

Congratulations to Depeche Mode, the Doobie Brothers, Whitney Houston, Nine Inch Nails, The Notorious B.I.G. and T. Rex  on being named to the Rock and Roll Hall of Fame Class of 2020.  This year's induction ceremony will be broadcast live on HBO on May 2.

We've got the trailer for a new Ozzy Osbourne documentary.  Have a look:

The Hot Ones web series is great.  Sean Evans is a good interviewer who gets the most out of his celebrity guests while they enjoy a line of increasingly spicy chicken wings.  Apparently, the show is moving to television and will debut on truTV on February 18.  We'll probably check that out.  However, it's being paired with a Hot Ones game show, and our guess is that this will not be added to our weekly "must-see" list:

Okay kids, that's going to do it for now.  Let's have the new Hall of Famers Nine Inch Nails close things out with, "The Perfect Drug," for today's, "Song of the Day."

Thanks for stopping by, everyone.  It's always great to see you.  Enjoy the rest of your day, be good, and we'll catch up with you again for more coffee soon.  Until next time, that's today's Clearing out the Clutter, and we are outta here.