Welcome back!  How's your weekend going so far?  We're fine, except that I still ended up dressing for winter yesterday, even though it was in the upper 60's.  My brain couldn't process the temperature change, since it's still, you know, January and all.  It's supposed to be close to the same today, so BDH and Little Buddha want to know if they can wear their shorts, even though it's raining.  Guess there's no reason to say no to that.  The guys also made coffee, so grab yourself a nice medium DD, and let's clear out some Sunday Clutter.

Donald Trump's claim that the assassination of Qassem Soleimani was done to prevent an "imminent attack" continues to disintegrate by the day.  At some point, we expect the administration to bail on the story, try to pivot to more of a "Soleimani was a bad guy who had to go" argument, and say the media made up the attack talking point.  What holds much more credibility is the notion that Trump launched the attack on Iran to make sure Republican senators don't bail on him during his impeachment trial.   Given that, it's no surprise that a majority of Americans disapprove of how Trump is handling Iran.  The public knows he'd sacrifice all of us to save himself.

A new poll shows that a strong majority of Americans support higher taxes on the wealthy.  Remember that the next time you hear Republicans (and some more conservative Democrats) yelling about "class warfare."  The party of extremists is the group who will bury everyone else to make the top 1% even richer.

Major red flags come up over the news that Mike Bloomberg won't release women who sued him from their nondisclosure agreements.  The country doesn't need another billionaire who's trying to hide his problems with women as the next White House occupant.

The bad news keeps coming for Puerto Rico, as the island was hit with another major earthquake Saturday morning.  If we understand correctly, this was an aftershock from Tuesday's event, which was the biggest quake to hit the area in over a century.

BDH and Little Buddha think you'll enjoy this clip of Boone the Golden Retriever meeting his baby brother for the first time.  Boone's just a little excited about the introduction, as you'll see.

Instagram added some more options to its Boomerang effect.  We don't know much about boomerang, but you're still welcome to follow us if you like.  The guys like to post some of their favorite pictures, including a few that they can't fit in here, so check out our page if you want to see what they do in their downtime.

The expression "anything can happen on any given Sunday in the NFL" is a cliche.  However, it's still true, and yesterday was a fantastic example of that (even if it happened on Saturday.)  The Tennessee Titans shocked the Baltimore Ravens 28-12 to advance to the AFC Championship Game.  Sports talk show hosts across the country now have to throw out their gushing Lamar Jackson talking points and instead start talking about Tennessee running back Derrick Henry (who rushed for 195 yards yesterday.)  We have nothing against Jackson, but this is just the kind of upset the NFL needs now and again.  The Titans will play the winner of today's Kansas City Chiefs - Houston Texans game, and we're pulling for Mike Vrabel's team to surprise everyone again next week.

While the Titans shocked the league, there was no surprise to yesterday's other game, as the San Francisco 49ers beat the Minnesota Vikings 27-10.  The San Francisco defense smothered quarterback Kirk Cousins and company all day.  Minnesota didn't score at all in the second half, and they looked broken with five minutes still to play in the 3rd quarter.  The 49ers leaned on their running game to take the pressure off quarterback Jimmy Garoppolo, who was making his first appearance in the playoffs.  Jimmy G. was just 11 for 19 for 131 yards, but the team rushed for 186 yards and increasingly ate up the clock as the game progressed.  San Francisco faces the winner of today's Seattle Seahawks - Green Bay Packers game next week, hopefully for the right to play the Tennessee Titans in the Super Bowl. 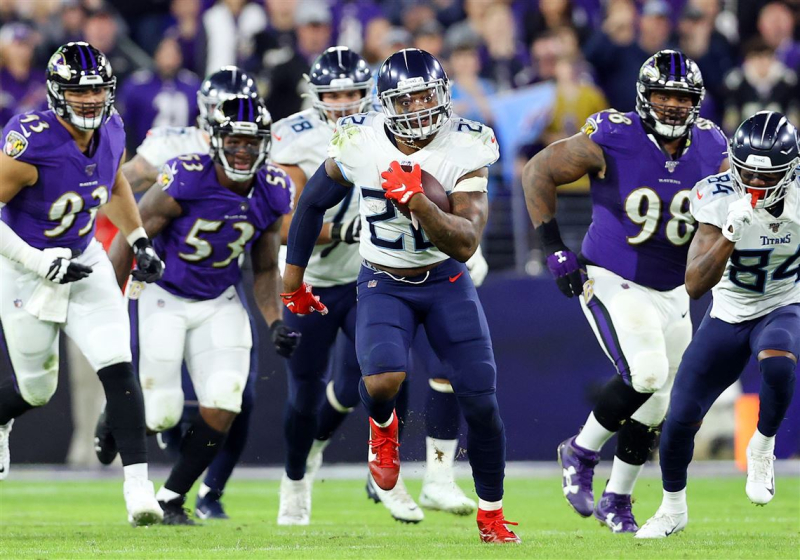 Here's an unexpected question:  Can anyone stop the Tennessee Titans?  (pic via post-gazette.com)

Major league baseball players are a generally timid group when it comes to expressing political opinions, so it was good to read this piece about Washington Nationals reliever Sean Doolittle, who's not afraid to speak his mind.  MLB could use many more guys like Doolittle.

Rock music lost a legend with the news that Rush drummer Neil Peart died on Tuesday after battling brain cancer.  The talented Peart was admired far and wide throughout the music industry and adored by the bands fans around the world.  Our condolences go out to his family and friends.  Peart was 67 years old.

NBC ordered a show about Dwayne "the Rock" Johnson's childhood, and we are here for it.  Johnson's father was a professional wrestler, his maternal grandfather was a legend in the wrestling business, and his maternal grandmother was a major wrestling promoter in Hawaii.  There's a lot of material to be mined in his early years.  Sounds like this is going to be a sitcom, although it probably also could have been played seriously.  In any case, add to that the fact that Johnson will appear in all 11 episodes?  Oh yeah, we smell what he's cooking, and it smells delicious.

A lot of people we know will be happy to hear that Amy Poehler and Tina Fey will once again host the Golden Globes in 2021.  The duo also hosted in 2013-2015.

Larry David recently appeared on The Late Show with Stephen Colbert.  This spot could just as easily have been a Curb Your Enthusiasm clip.  That reminds us, we need to set the DVR, because Curb returns to HBO on January 19:

Sophia Bush is joining the cast of This is Us for the remainder of the season, although her character's role on the show has not been confirmed.

FX has a miniseries coming about the fight over the Equal Rights Amendment.  Check out the incredible cast of Mrs. America:

If we had Apple TV, we'd be checking out the upcoming Mythic Quest: Raven's Banquet, a comedy about the creation of a video game, brought to you by the team behind It's Always Sunny in Philadelphia:

Okay kids, that's going to do it for now.  Let's have Rush close things out with a live version of, "Spirit of Radio," for today's, "Song of the Day."

Thanks for stopping by, everyone.  It was great to see you, as always.   BDH and Little Buddha say of course you're welcome to come back later if you want to watch the newest Doctor Who episode with them tonight.  Otherwise, enjoy the rest of your day, be good, and we'll catch up with you again soon.  Until next time, that's today's Clearing out the Clutter, and we are outta here.