Welcome back!  How's your week going so far?  Are you all still in one piece?  Looks like that's it for the snow for now.  The next precipitation is supposed to be rain in about 10 days.  In the meantime, we haven't started our Christmas shopping, because everyone is still working on their lists.  That's fine, it all comes together eventually.  What do you say we take a look at today's headlines?  BDH and Little Buddha made coffee, so grab yourself a nice medium DD, and let's clear out some Wednesday Clutter.

The House Intelligence Committee released a scathing 300-page report showing that Donald Trump's corrupt efforts in Ukraine weakened national security.  The report also blasts the White House for their obstruction of the inquiry.  The report doesn't specifically call for impeachment, but we all know that's where this is heading.  There's simply no reality-based defense for Trump's actions.  He abused the power of his office to pressure another country to announce an investigation of Joe Biden and his family for Trump's personal benefit.  Trump took his repeatedly-discredited talking points from Russia and has done everything he can to obstruct Congress from executing its constitutional oversight powers of the executive branch.  We know Republican voters are increasingly into the idea of dictators, but this is all un-American, and only a patsy would exonerate Trump's clear wrongdoing. 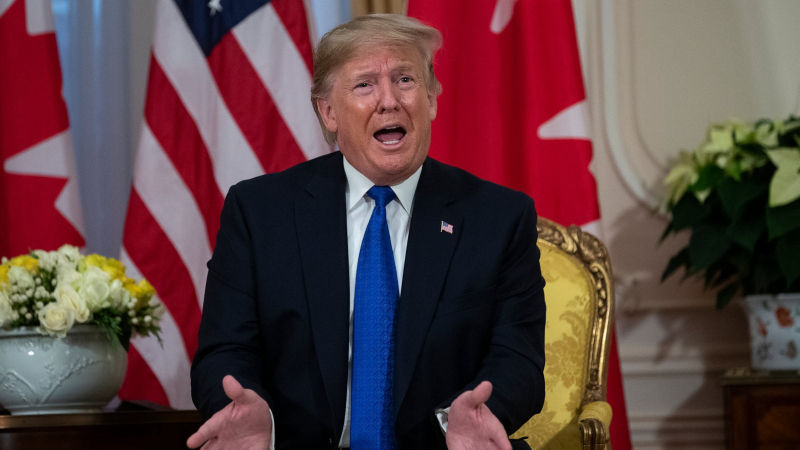 Report makes it clear Donald Trump should be removed from office today.  (pic via abcnews.go.com)

The committee's report also makes it clear that Representative Devin Nunes should have recused himself from the impeachment hearings, and that he's going to need a lawyer before he's indicted as a co-conspirator.

Donald Trump suffered another legal loss yesterday when a federal appeals court ruled that Deutsche Bank and Capital One must comply with a congressional subpoena and turn over various financial records belonging to him, his family, and various businesses.  As expected, Trump's legal team will appeal to the U.S. Supreme Court and once again ask Chief Justice John Roberts and company to protect him in what would be a purely partisan decision.

Just a reminder:  Donald Trump would have no problem crashing the stock market if he thought it would somehow help get him re-elected.  Trump's most recent comments about the trade war with China indicate he's willing to hold Wall Street hostage all year if that's what it takes to stay in the White House past 2020.  He'd be perfectly happy to create another crisis and then "solve" it at the last minute to pretend he has a clue about how to lead the country.  Staying out of jail is all that matters to him.

If Donald Trump says he doesn't know a guy, you know the immediate response is to then flood the Internet with pictures of Trump with the guy in question.  In this case, the "other man" is Prince Andrew, who shared at least one friend in common with Trump:  That would be Jeffrey Epstein.  It's appropriate to focus at the moment on Trump's abuse of power when it comes to Ukraine, but we can still (vaguely) remember a world where being associated with a sex-trafficker/pedophile like Epstein would have ended a politician's career on the spot.

Being laughed at is one of Donald Trump's biggest fears, so he's not going to like this clip of world leaders seemingly mocking him at Buckingham Palace last night.  We just hope no one gets hurt as a result, because there's little chance the Great Pumpkin will let this slide and not lash out at someone.

Senate Republicans have no interest in defending the United States, or engaging in any form of actual governing except for appointing conservative judges.  For example, confirming a nominee who opposes fertility treatments is the kind of thing the GOP is prioritizing.  It is going to take decades to undo the damage "Moscow Mitch" McConnell has done to this country.

We're sorry Senator Kamala Harris dropped out of the Democratic presidential primary yesterday.  She wasn't our choice for a candidate, because we don't love having people with prosecutorial backgrounds running the executive branch.  However, Harris was exponentially more qualified than someone like Mayor Pete, and it's a bad sign that she's being forced out while billionaires like Tom Steyer and Mike Bloomberg are buying their spots in the race.  The positive aspect of this decision is that Senator Harris now has more time to make life uncomfortable for Donald Trump during the Senate impeachment trial.

ICYMI, there's a new ad for a Peleton stationary bike that is not being well-received...at...all.  Turns out people don't like ads that feature women who are seemingly body-shamed by their husbands.  Who could have seen that coming?

The Carolina Panthers fired head coach Ron Rivera after nine seasons yesterday.  That decision seems like it's been expected for a while.  Rivera had a 76-63-1 career record and took the team to a Super Bowl in 2016, but the Panthers have been drifting ever since.  Secondary coach Perry Fewell was named interim head coach, and we don't expect to Rivera to be unemployed for long.

There's another trailer out for Star Wars:  The Rise of Skywalker, and this features a lot of Daisy Ridley kicking ass, so cheers to that.  We plan on going to the theater with no expectations whatsoever for this film, except to hopefully to have some fun for a couple of hours.  We like our odds of being successful.  Have a look:

We only have minimal understanding of the DCTV Crisis on Infinite Earths mega-event that starts on the CW Network on December 8.  However, even if you don't know anything about the story, you have to admit this trailer looks cool as hell:

We must have some DC Comics fans here.  What do you think, would it be possible to enjoy watching this even if we have almost no idea about the backstory?  Drop us a line at info@clearingouttheclutter.com with your thoughts.

Pearl Jam just announced some 2020 tour dates, but they're all in Europe.  Well, some of you have plenty of time to get your passports in order, and some of you are already in Europe, so everyone, have a good time!

This is something we never thought we'd hear: Willie Nelson is giving up marijuana for health reasons.  Giving up smoking anything is probably a good move for an 85-year-old.  The country music legend says he's still touring, though.  We've said this before, but if you have the chance to see him perform live, you should do it.  That window is probably closing sooner rather than later, so don't pass up the opportunity if he comes to your area.

Okay kids, that's going to do it for now.  Christmas is three weeks from today (so we really should get started on the shopping.)  We probably won't do 21 straight Christmas tunes between now and then, but here's Pearl Jam to kick off the countdown with, "Let Me Sleep," for today's, "Song of the Day."

Thanks for stopping by, everyone.  We hope you enjoyed it as much as we did.  Have a good rest of your day, and we'll catch up with you again soon.  Until next time, that's today's Clearing out the Clutter, and we are outta here.