Welcome back!  Come on in, have a seat.  I'm just waiting for BDH and Little Buddha to come in with today's weather forecast.  I did all of this shoveling yesterday, and you can't even tell.  Oh, here they are.  It's supposed to stop snowing by 1:00?  Okay, we can work with that.  I know it's basic biology, but I'm always amazed by how much better I feel after a good night's sleep.  I think I went to bed about two hours earlier on Monday than I did on Sunday, thanks to Sunday's Patriots game.  Anyway, we're good to go, excited to hang out with you, and maybe a little eager to procrastinate a bit more about the shoveling.  The guys say the coffee is ready, so grab yourself a nice medium DD, because it's time to clear out some Tuesday Clutter.

House Republicans are still all-in on defending Donald Trump.  The GOP released a 123-page document in support of Trump yesterday which doesn't admit an ounce of wrongdoing, despite all of the evidence that has been laid out in recent weeks.  They continue to push the 2016 Ukraine election-interference conspiracy theory, even though they know full well that it's not true and is in fact Russian propaganda.  We're old enough to remember when Republicans claimed to be strong on national defense, but now they're all parroting Vladimir Putin.  It's almost as if these guys never believed any of their own rhetoric, and the only thing they care about is staying in power at all costs. 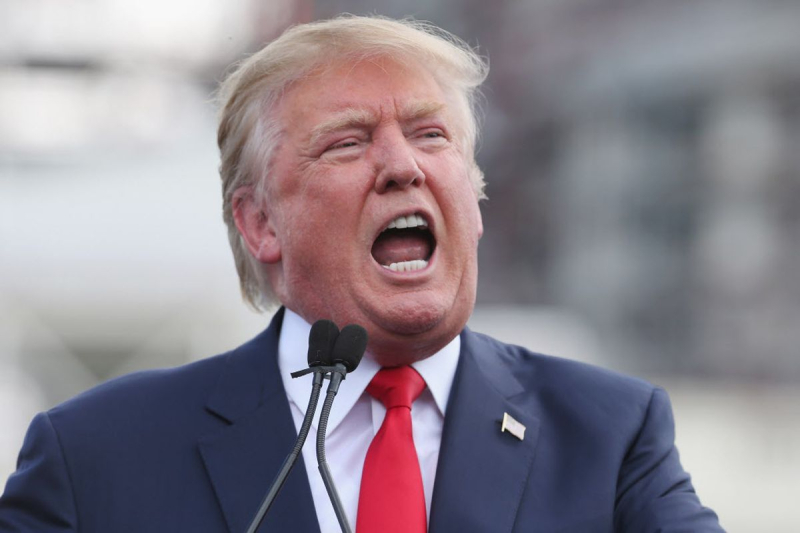 Republicans will do whatever it takes to protect the provider of conservative judges and tax cuts for the top 1%.  (pic via chicago.suntimes.com)

Representative Duncan Hunter (R-CA) will plead guilty to charges of misusing campaign funds and is ready for jail.  It's a stark reversal for the six-term Republican who long claimed this entire investigation was a political witch hunt.  Where else have we heard that term recently?

Political Twitter users are well-aware that George Conway, husband of Trump adviser Kellyanne Conway, is a frequent critic of his wife's boss.  We don't disagree with any of his arguments.  However, we can't help feeling that this is a long-term con that's designed to salvage the Conway name after Donald Trump finally leaves the White House.  In any case, the couple's Twitter spat yesterday was just weird.

Apparently scientists are talking about the possibility of a HIV vaccine being approved by 2021.  That would be one of the greatest public health achievements in our lifetimes if it comes to fruition.

McDonald's is joining the chicken sandwich wars.  We don't eat fast food, but there's something about fried chicken sandwiches that makes us hungry every time we see one of the ads or just read a description.  Are there any foods that make you respond like that?  Someone mentions them, and your stomach starts growling?

The Boston Red Sox traded catcher Sandy Leon to the Cleveland Indians for minor league pitcher Adenys Bautista.  It's not a surprise move.  Christian Vazquez has clearly locked down the starting catching job, and there's probably a perfectly fine back-up to be had for less than the $2.475 million that Leon made last year.  We tip our cap to Leon for his help with the 2018 World Series winning team and wish him the best of luck moving forward.

The Chicago Cubs cut infielder Addison Russell yesterday.  Russell served a 40-game suspension in 2018 for domestic abuse, so one immediately wonders if he'll sign with the Houston Astros.  All cynicism aside, domestic violence charges should be the end of an athlete's career.  Taking performance-enhancing drugs doesn't bother us nearly as much as guys who beat women.

We admit we're surprised that the Pittsburgh Steelers are 7-5 and still fighting for a playoff spot, considering all of the injuries they've dealt with this year, especially quarterback Ben Roethlisberger's season-ending injury in Week 2.  Let's see how things play out, but we're curious if the dynamic between Roethlisberger and head coach Mike Tomlin changes at all if Tomlin shows he can get the team to the playoffs without Big Ben.  Our guess is that Roethlisberger's ego wouldn't handle that well.

ICYMI yesterday, we're thrilled to have confirmation that Doctor Who returns on New Year's Day.  January is probably our least favorite month of the year, but having new episodes to look forward to each week should go a long way in helping us get to February.

Well that was all sorts of outstanding.  Black Widow comes out in May 2020.  See you at the movies.

Apparently some people are upset about Anna Paquin's limited dialogue in The Irishman.  We side with Robert De Niro here.  Without giving away any spoilers, Paquin's facial expressions as De Niro's character's daughter speak volumes in her scenes, and the few lines she does say cut like a knife, partly because it's the only time in the movie she verbalizes her contempt for her father.

It must have been a quiet news day yesterday, because people were losing their minds on Twitter over the news that singer Billie Eilish said she's never heard of Van Halen.  Either that, or millennials and baby boomers were just looking for something else to fight with each other about.  Listen, we've been Van Halen fans for 30+ years, and this doesn't faze us in the least.  The reportedly 17-year-old singer would have been 10 years old when the band's last studio album came out, and she hadn't been born yet when they were regularly releasing music.  She doesn't know who they are, we barely know who she is, and everyone needs to take a deep breath and follow Wolfgang Van Halen's advice to just enjoy some music.

Hold on, is it 1998 again?  A lot of folks we know are excited by the news that Alanis Morissette is going on tour with Liz Phair and Garbage next year.  Morissette also has a new album coming out in May.  We probably won't be going to the show, but we will be interested in the reviews.

Okay kids, that's going to do it for now.  Let's take a trip in the wayback machine and have Alanis Morissette close things out with, "All I Really Want," for today's, "Song of the Day."

Is this the time to mention that all we really want is for someone else to do the shoveling?  Fine, we'll take care of it.

Thanks for stopping by, everyone.  It's always great to see you.  Google Maps says the roads are a mess out there, so be careful if you're driving, or better yet, stay home instead if you can.  One way or the other, enjoy the rest of your day, be good, and we'll catch up with you again for more coffee soon.  Until next time, that's today's Clearing out the Clutter, and we are outta here.