Welcome back!  How are you?  December is apparently determined to announce its arrival with authority today.  BDH and Little Buddha just told me that it's currently 14 degrees outside, and of course, the first snowstorm of the season is supposed to arrive later this afternoon.  Ahh, life in New England.  I will try not to complain about the weather every day for the next 3+ months.  Instead, I'll just say that the guys are comfortable in their long underwear, and I should do some stretching before shoveling tomorrow.  In the meantime, we've got fresh coffee, so grab yourself a nice medium DD, and let's clear out some Sunday Clutter.

The House Intelligence Committee is expected to begin reviewing the draft report of its investigation into Donald Trump's corrupt Ukraine-related activities on Monday.  After the report is approved on Tuesday, it will be sent to the House Judiciary Committee, who will then focus on the articles of impeachment.  Trump has until December 6 to decide if he's going to participate in the upcoming hearings or continue to obstruct, deny, and attack the proceedings.  He has every chance to present his side of the story, and his supporters should expect him to do it, rather than continue to follow him without question.

Of course, half of Republicans apparently think Trump is a better president than Abraham Lincoln. Seems there's not much hope for independent thought there.  Maybe, just maybe, we'd be better off ignoring the 20% of the population that voted for the guy and focus on everyone else instead?  Is that crazy?  Also, do you think these voters are mad Lincoln freed the slaves?

Donald Trump and his staff seem to think the safer approach to fighting impeachment is to stage a barrage of photo ops to make it look like the Great Pumpkin is busy doing his job.

Let's see if we've got this right:  A Newsweek reporter was assigned the task of writing about Donald Trump's Thanksgiving plans a week in advance.  She wrote the article based on publicly available information.  Trump then decided to go to Afghanistan at the last minute, so the reporter was fired for an inaccurate report because her editor didn't update her story in a timely fashion?  Is Newsweek mad that Jessica Kwong couldn't see into the future?  What's the fireable offense here, and if there is one, isn't it on the editor?

Representative Ilhan Omar's Republican challenger has been permanently barred from Twitter after tweeting that Rep. Omar should be hanged due to a false conspiracy theory.  This is the GOP under Donald Trump - wearing tin foil hats (or hoods) and threatening the lives of everyone they disagree with, especially those who don't look like them.

Brazil's President Jair Bolsonaro blamed Leonardo DiCaprio for the country's recent forest fires, because this world isn't already weird enough.  It probably won't surprise anyone to hear that President Bolsonaro offered no evidence to back up his claim that DiCaprio and members of non-governmental organizations are setting the fires.  Perhaps Bolsonaro is looking to claim the title of "craziest leader in the Southern Hemisphere."

We heard some people talking on CNBC about whether or not "Black Friday" still had the same punch, since online holiday sales now start right after Halloween.  Well, this year's shopping frenzy pulled in $7.4 billion, making it the second biggest online sales day of all time, so yes, it appears like it still works for retailers. Our Christmas shopping starts this week, and we try to buy as much as we can from local stores and then go online to fill in the gaps.  What's your approach?

This is interesting:  There are some scientific reasons why women complain about being cold more often than men.  This has come up several times in recent weeks with a woman we know who is constantly saying it's freezing in a room that doesn't seem that cold to us.

The New England Patriots face the Houston Texans tonight.  It's just as well that this game is in Houston, considering what a mess the weather is supposed to be in Foxboro later today.  It seems like half the team was hit with a bug of some sort this week, but the Patriots are 10-1 all time against the Texans, and we don't see any reason for that success to stop tonight.  The defense will keep Houston in check, and the Patriots offense should be in decent shape.  Isaiah Wynn's return at left tackle has already bolstered New England's offensive line which looked better against the Dallas Cowboys last week.  Wynn's presence, plus the expected return of Philip Dorsett and Mohamed Sanu, should give Tom Brady enough weapons to take care of business against the 20th ranked Texans defense. 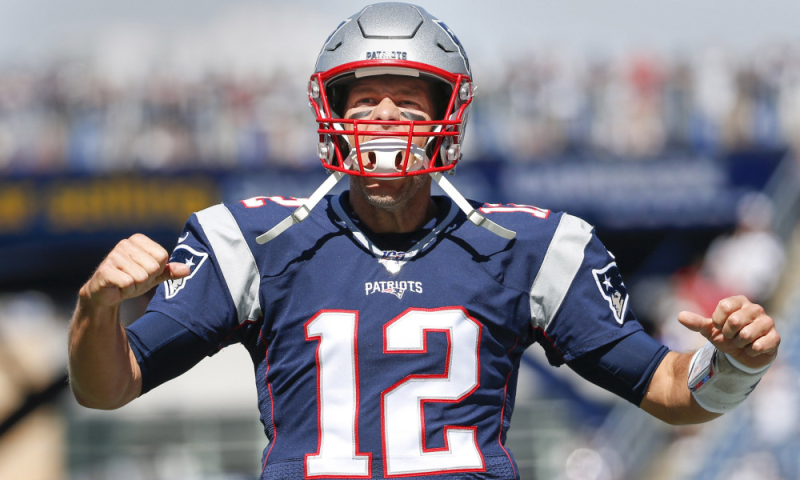 Tonight should be a good night for Tom Brady and the New England Patriots.  (pic via usatoday.com)

The NFL suspended Arizona Cardinals cornerback Josh Shaw for the rest of this season for betting on games.  As gambling continues to expand across the country, and the NFL places the Raiders in Las Vegas, you can bet your last dollar this won't be the last such suspension.  Of course, what you should really do is take that dollar and put it in the bank, or invest it in a low-cost index fund.  The Clutter investment team is happy to talk to you after we're done here.

We thought there was going to be a punchline here, but apparently Pete Davidson is requiring his audiences to sign nondisclosure agreements before they attend his live shows.  That's insane, but so is the fact that Davidson has a career, despite having no discernible skills.  Perhaps that's what he doesn't want the audience talking about in public after seeing his act.

Okay kids, that's going to do it for now.  Let's have the "Queen of Soul" Aretha Franklin close things out with a stirring cover of the Simon & Garfunkel classic, "Bridge Over Troubled Water," for today's, "Song of the Day."

Thanks for stopping by, everyone.  It was great to see you, as always.  Enjoy the rest of your day, and please be careful out there if you're going to be driving in the snow.  We want to see all of you back here safe and sound for more fun again soon.  Until next time, that's today's Clearing out the Clutter, and we are outta here.