Welcome back!  How are you?  We're dragging a bit around here at the moment, thanks to staying up too late for last night's New England Patriots game, but we'll get to that in a minute.  I've definitely got some shoveling to do after we're done here today.  My back was acting up this weekend, but it's a little bit better now, so I see some Advil and stretching in my future before I go outside.  Some extra coffee probably wouldn't hurt either.  Fortunately, BDH and Little Buddha made a fresh pot, so grab yourself a nice medium DD, and let's clear out some Monday Clutter.

Neither Donald Trump nor his legal counsel will participate in Wednesday's House Judiciary Committee impeachment hearing.  Who could have possibly seen that coming, apart from everyone?  One of Trump's ongoing complaints over the course of the impeachment inquiry was his inability to have a say in the process.  Now he's being given that chance, and he's not going to take it.  The doesn't scream "innocent man."   It's almost as if he and the GOP are acting in bad faith or something.  The Great Pumpkin's team left themselves an opening to take part in later hearings, but don't hold your breath waiting for that to happen.  They're hoping to run out the clock, throw as much garbage against the wall to see what sticks, and above all else, trying to keep Trump from talking about any of this under oath. 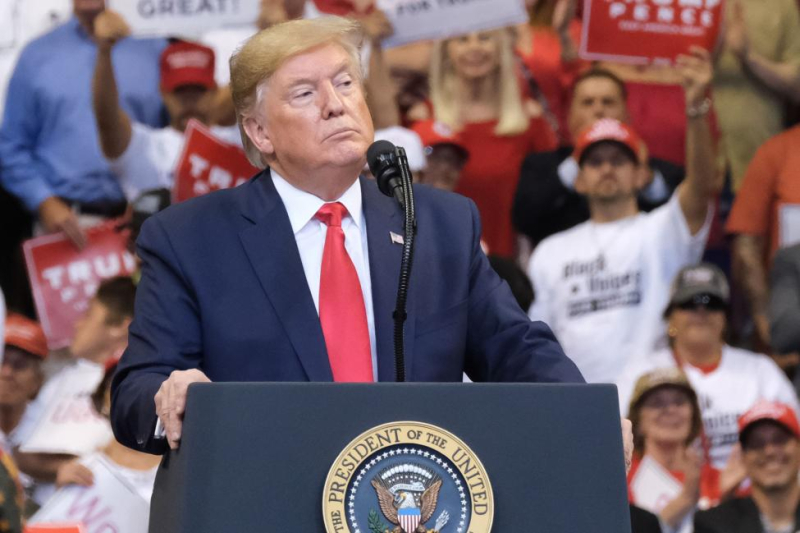 A con man who knows the truth is not on his side.  (pic via upi.com)

Donald Trump and other Republicans are fond of claiming that House Democrats haven't done anything besides the impeachment inquiry.  Just a reminder that the House has passed roughly 400 bills that the Senate refuses to action on, because all "Moscow Mitch" McConnell cares about is approving conservative judges.  It's both a thwarting of our government as well as the determining the judicial landscape for years to come, long after Trump is finally out of the White House.

The U.S. Supreme Court will hear its first gun control case in 10 years today.  It's a bad sign that the conservative justices want to look at a New York City regulation that's already been altered to be more flexible for gun owners who complained about the original language.  Since their concerns have been addressed, there's no reason for the court to hear this case.  The NRA is finally being seen as the domestic terrorist organization that it is, and now it appears the justices are looking to attack gun control policies.  The Supreme Court was wrong to rule in 2008 that the 2nd Amendment applies to individuals, but at least there was some language in that ruling limiting the right to the owner's home.  This crew looks ready to remove those restrictions, which will make the United States an even more dangerous place to live.  That's especially terrifying, considering we've had 385 mass shootings in 335 days this year.

You may remember that we felt pretty confident about the New England Patriots beating the Houston Texans last night.  Well, there's a reason why this isn't a sports betting website.  The Patriots lost 28-22 to the Texans in a game that didn't seem that close.  New England was in trouble from the start, and was down 21-3 at one point.  Tom Brady seemed to visibly lose patience with his teammates on the field about two minutes into the game, which either looked like hyper-competitiveness or a sullen tantrum, depending on your point of view.   We understand his frustration, but we've got a growing fear that this irritation is going to lead to an ugly scene before the year is over.

The Houston defense played much better than expected all night. Brady ended up going 24 for 47 for 326 yards as he tried to figure out a way to get the team back in the game in the second half.  The Patriots came just short of recovering an onside kick with 50 seconds left in the game, but really, they didn't deserve to win.  The loss means New England is now in the #2 spot in the AFC behind the Baltimore Ravens, and as of December 2, it's still not at all clear how this offense can find a way to click against legitimate defenses.  The New England defense is still terrific, but they have no margin for error, and they're going to be put to the test against the Kansas City Chiefs next Sunday.

Our social media feeds were filled over the weekend with people raving about the new movie, Knives Out.   We like mysteries.  Perhaps we need to take a trip to the movie theater once we finish shoveling the driveway.

You know, we were just trying to figure out last night if we had anything to look forward to in January.  Not much came to mind, but the return of Curb Your Enthusiasm is a good start:

We're sorry to hear that actress Shelley Morrison died on Sunday.  Morrison was best known for playing maid Rosario Salazar on Will & Grace.  She was 83 years old.  Our condolences go out to her family, friends, and fans.

The legendary thrash metal band Slayer played what they say is their last concert this past Friday.  You know how we feel about musician retirement announcements around here.  However, there's no doubt that these guys were giants in their genre for 35 years, and you have to appreciate that longevity.

Okay kids, that's going to do it for now.  We didn't get enough sleep, and the excitement for shoveling is shall we say, "not high," so we could use a little help with the motivation.  Let's have Metallica close things out with a live performance of, "Master of Puppets," for today's, "Song of the Day."

Thanks for stopping by, everyone.  It was great to see you, as always.  There's more snow coming today, so be careful out there, particularly if you're driving.  Take your time on the roads, it's better to be late and safe.  BDH and Little Buddha want to see you all back here in one piece again soon.  Until next time, that's today's Clearing out the Clutter, and we are outta here.