Welcome back!  Come on in, have a seat.  How are you?  Who here has to deal with holiday traffic today?  Good luck with that, particularly if you are out while it's raining or snowing.  We're all just plugging away here at the moment.  I couldn't find anything new for BDH and Little Buddha to read yesterday, so please drop us a line at info@clearingouttheclutter.com if you have any suggestions.  That reminds me, I should probably ask them to start working on their Christmas lists soon.  Oh, here they are.  Hi guys.  They say the coffee is ready, so grab yourself a nice medium DD, and let's clear out some Wednesday Clutter.

There it is:  Donald Trump is trying to claim that he didn't instruct Rudy Giuliani to work in Ukraine on his behalf.  This is as sad a lie as it is predictable.   The fact that Trump repeatedly directed Ukrainian President Volodymyr Zelensky to work with Giuliani during their infamous July 25 call?  Don't know what you're talking about.  Trump probably thinks he showed restraint by waiting this long to start bailing on his personal attorney.  Giuliani better have his mysterious insurance policy handy, because he's going to be thrown under a bus.

It was fitting that Trump made the comments during an online interview with Bill O'Reilly yesterday.  Who understands a repeatedly accused sexual offender more than a guy who can't get hired on TV anymore because of his long history of sexual impropriety at work?

Speaking of Ukraine, it's been revealed that the White House froze the aid just hours after Trump's call with President Zelensky.  Also, Donald Trump knew about the whistleblower's complaint before he finally released the aid to the country, thus erasing yet another line of defense that Republicans have been using for weeks.  A reminder to Trump supporters:  If you stop attempting a criminal act because you know you're going to be caught, you've still attempted a criminal act.

Meanwhile, when he's not running away from Giuliani, Donald Trump is busy telling supporters that liberals want to change the name of Thanksgiving, but he won't let that happen.  Honestly, what are we doing here?  The pathological liar is now just making up holiday wars because it's the first thing that comes to his little mind.  It's fair to ask if his recent unexplained trip to the hospital involved an event that cut off oxygen to his brain.  He's living in a sad little fantasy world where he's the savior against imaginary demons. 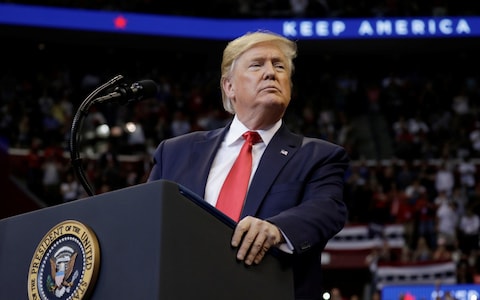 Reality is still not Donald Trump's friend.  (pic via telegraph.co.uk)

Now that the House Intelligence Committee seems to be done for the time being, the first House Judiciary Committee impeachment hearing will be on Wednesday, December 4.  The best part about that right now is that it means we won't have to listen to Trump lapdog/future ethics investigation recipient Rep. Devin Nunes rambling about conspiracy theories anymore.  We also won't have to listen to Rep. Jim Jordan's constant yelling to disguise the fact that he never has anything to say.   Chairman Jerry Nadler has already informed Donald Trump that he's allowed to attend and bring legal representation to these hearings.  We expect Trump not to send anyone while complaining about a witch hunt.

Joe Biden is trying to walk back his opposition to legalizing marijuana a bit after realizing for once that this is no longer 1988, and he's out of touch with today's politics over that issue.  Biden is now claiming he never said pot was a "gateway drug" after repeatedly making that statement.  Kind of reminds us of another guy who struggles with the truth.

A new study indicates the drug Ketamine might be able to help alcoholics significantly cut back on their drinking.  Ketamine (also known as "Special K") has also shown signs of helping treat depression.  More research needs to be done in both areas, but it would be terrific if these results can be safely and successfully replicated over the long-term.

Papa John's founder John Schnatter claims he's eaten 40 of the chain's pizzas in the last 30 days and doesn't like the results.  He says his former company changed the recipe, but really, there's no way that eating that much of the chain's product in a short time would end well.  Schnatter, who was forced out last year after complaining about NFL player protests and using racially-charged language on a conference call, still has multiple lawsuits pending against Papa John's.  Can't really see how "declining quality" would be a winning argument for him here.  Schnatter ended the interview by claiming "a day of reckoning" was coming for the company, but again, we say that's probably going to be a bigger issue for him after supposedly eating all that pizza.

We're still processing the death of a major character on NCIS: New Orleans, but the preview clip in this article goes to a larger issue we sometimes have with television programs.  Actor Michael Nouri is playing the lawyer defending the guy accused of the murder.  As fans are well-aware, Nouri used to play Mossad Director Eli David on the NCIS mothership until his character was killed a while back.  It's established that all of these programs operate in the same TV universe, so you shouldn't have a guy who played such a major role in one show come back as someone else in a different show.  If Jethro Gibbs came to New Orleans, would he tell Nouri, "You look like someone I used to know?"

This has also repeatedly happened in the Law & Order universe.  A number of the detectives were criminals at one point, which you would think someone might notice.  Law & Order: SVU had a situation last season where Titus Welliver played a major villain at the end of the year.  The problem with that was that Welliver had also played a criminal in Chicago P.D. which takes place in the same TV universe as SVU.  Before you say it, yes, we've thought way too much about this.  The problem is that casting errors like this totally take us out of the story, and that's not fun.  Let's move on...

Gabrielle Union and Julianne Hough reportedly left America's Got Talent due to a toxic environment at the show which included offensive jokes and excessive comments about their physical appearances.

We want to wish a happy belated birthday to the one and only icon Tina Turner, who turned 80 years old yesterday.  It's amazing to think that her comeback as a solo artist began 35 years ago.  She's a remarkable woman and a hero to millions.  Cheers.

The Who have a new album, and judging by this interview, neither Pete Townshend nor Roger Daltrey would be upset if the other one was hit by a bus.

Okay kids, that's going to do it for now.  Let's have the Queen herself, Tina Turner, close things out with a rocking live version of, "You Better be Good to Me," for today's, "Song of the Day."

That's how you put on a show, friends.

Thanks for stopping by, everyone.  It was great to see you, as always.  BDH and Little Buddha want to make sure you know we'll be here tomorrow, so you're all invited to come back then if you have time before the craziness begins (or if you're skipping the whole thing and just want to hang out with us for a bit.)  Otherwise, enjoy the rest of your day, be good, and we'll catch up with you again soon.  Until next time, that's today's Clearing out the Clutter, and we are outta here.