Welcome back!  How are you?  Yesterday was a challenge, thanks to not getting enough sleep and still adjusting a bit to changing the clocks.  However, it was still a productive day, so that felt good.  BDH and Little Buddha made me go to bed early last night to make sure I'd be ready to go today, so I'm ready to tackle the to-do list after we're done here.  That includes voting in our local election, so don't forget to do the same if there's one happening in your community today.  National and state politics are important, but so is expressing your views about your city/town government.  However, first, let's check out today's headlines.  The guys made coffee, so grab yourself a nice medium DD, because it's time to clear out some Tuesday Clutter.

A federal appeals court ruled yesterday that Donald Trump must turn over his tax returns to a Manhattan grand jury.  Trump is expected to appeal to the Supreme Court, but it's hard to see how he wins the case.  Trump's argument that he's absolutely immune from any aspect of criminal prosecution while he's in office hasn't passed muster with the courts yet.  That shouldn't change now, unless the conservative majority abandons all pretense of following precedents and just kneels before him.  Chief Justice John Roberts is unlikely to let that happen, given his continual focus on preserving the perceived legitimacy of "his" court. 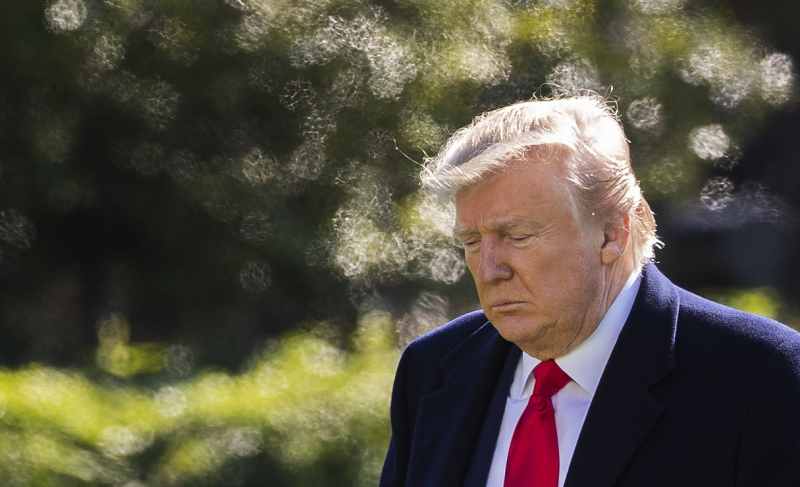 "Why won't everyone just leave me alone?"  (pic via wfla.com)

The 2020 presidential election is now less than a year away, and a new poll shows that Elizabeth Warren, Bernie Sanders, and Joe Biden all have double-digit leads over Donald Trump.  In addition to the impeachment inquiry,

(S)ix in 10 Americans or more say he’s not honest and trustworthy, lacks the kind of personality and temperament it takes to serve effectively and doesn’t understand their problems. Slightly smaller majorities doubt his deal-making, delivery of “needed change” to Washington and leadership generally.

Of course, 12 months is still multiple political lifetimes from now, so no one should be taking anything for granted.

Indicted Rudy Giuliani associate Lev Parnas might end up cooperating with the House impeachment inquiry after all.  Parnas reportedly had this possible change of heart because he didn't like Donald Trump claiming he didn't know him.

Trump friend Roger Stone's trial finally begins today.  Stone is charged with "one count of obstructing a proceeding, five counts of making false statements to Congress and one count of witness tampering" relating to the stolen materials WikiLeaks had on a number of political figures in 2016.  Stone seems to shoot the Trump Kool-Aid directly into his veins, so we're expecting Trump to still say he knows Stone, because he's probably already offered the guy a pardon to make sure he keeps his mouth shut.  However, the trial will be just one more thing for the Great Pumpkin to rant about and try to improperly influence.

A staffer for Tom Steyer's presidential campaign resigned after allegedly being caught stealing data about the Kamala Harris campaign in South Carolina.  The billionaire Steyer is already annoying us with his non-stop TV ads and the fact that he's trying to buy the nomination.  This also doesn't help our opinion of his campaign.

Julian Castro's campaign is laying off staff in New Hampshire and South Carolina to focus on Iowa and Nevada.   We're not expecting Castro to make it to the finish line, but he is likely to be one of the top choices for the eventual Democratic nominee's VP pick, so he should remain a figure on the political landscape for a good while.

Good for Oklahoma for commuting the sentences of more than 450 inmates yesterday.  The inmates were released as the result of a criminal justice reform law passed in the state that allowed the review of sentences for crimes that would no longer be considered felonies.

Facebook is changing its logo, so that should be the end of all of the company's problems, right?

Boston Red Sox DH J.D. Martinez decided not to opt-out of his contract after all yesterday.  That means the Red Sox will need to make other moves to reduce their payroll.  Boston Globe baseball writer Peter Abraham has a number of suggestions about moves the team could make that would allow them to also keep Mookie Betts for the long-term.  We're on board with all of his ideas, even if it means the Sox have to eat some contracts or accept less than great returns (particularly for members of the starting rotation.)  Hang on tight, Sox fans.  This off-season could be a wild ride.

The Los Angeles Chargers are not being well-received in L.A., to say the least.  Chargers fans seem to make up about 10% of the crowd for the team's "home" games.  That doesn't look likely to change anytime soon, so it's interesting to hear that the NFL is at least considering moving the Chargers to London full-time.  Not sure how that would work for the team's schedule, and are the players going to agree to move out of the country?  Maybe the idea won't go anywhere, but it should be fun to see how it plays out.

Former NFL player Kellen Winslow Jr. accepted a plea deal yesterday that will send him to jail for 12-18 years because of multiple charges of sexual assault.  Winslow was looking at a life sentence if he was found guilty of every crime he was accused of committing.  He appears to have been a serial offender, and everyone is better off with him behind bars.

Okay kids, that's going to do it for now.  Let's have the Foo Fighters close things out with a great live version of "Times Like These" for today's, "Song of the Day."

That tune has to be in our top 1o list of all-time favorites.

Thanks for stopping by, everyone.  Hanging out with you is always a blast.  Enjoy the rest of your day, don't forget to vote, and we'll catch up with you again soon.  Until then, that's today's Clearing out the Clutter, and we are outta here.