Welcome back!  How are you?  We're all fine on this end at the moment.  I'm hoping I can find BDH and Little Buddha something new to read today.  It's been a little while since they had a good book to enjoy.  Other than that, things are moving along.  The guys just gave me the weather forecast.  Looks like we've got a high of 55 today, then 45 for the next two days, and then we peak in the mid-30's as we hit December.  How is December almost here?  Where did this year go?  Anyway, let's check out today's headlines.  There's a fresh pot of coffee on the table, so grab yourself a nice medium DD, because it's time to clear out some Tuesday Clutter.

Oh!  Hold on, quick note.  BDH and Little Buddha have a special announcement to make about our Amazon page this coming Friday, so make sure you don't miss it!  Now, let's get to work...

A federal judge ruled yesterday that former White House counsel Don McGhan must comply with a congressional subpoena to testify in the impeachment inquiry.  Claiming that a member of the executive branch has absolute immunity is a fairy tale invented in Trump's brain that has no legal justification.  It turns out that presidents aren't kings, no matter how much Donald Trump might wish otherwise.  The White House will of course appeal, because they'll do anything to obstruct this probe into Trump's corrupt dealings.  However, unless a court wants to make up new law on the spot, this ruling will stand, and McGhan will have to appear before lawmakers, and this decision may open the door to additional witnesses who have been held back by the administration.  What McGhan will actually say is a different matter, but we'll get to that down the road. 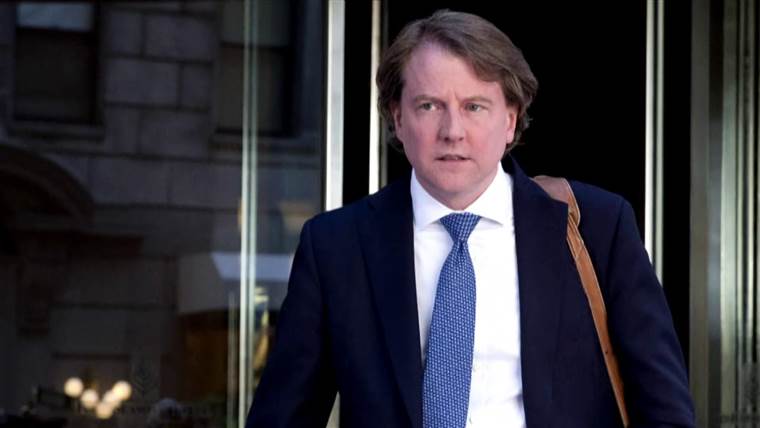 Court says McGhan must testify.  Who will follow?  (pic via nbcnews.com)

The Supreme Court did agree to delay a ruling that would have forced Donald Trump to turn over his tax returns to Congress.  Those documents are also being sought by Manhattan District Attorney Cyrus Vance Jr. in a separate investigation, so the justices will have to decide how to handle both requests.  Trump's lawyers have until December 5 to make their arguments about why the court should take up the case, and Chief Justice John Roberts and his colleagues are expected to make a decision about next steps by January.

Trump is claiming declining support for the impeachment process, based on polls that only exist inside his head.

Donald Trump reportedly wants the three accused/convicted war criminals he saved to campaign with him in 2020.  What exactly is the message that's supposed to send to the rest of the country?  "The GOP is the party of war criminals" doesn't feel like a winning slogan, but since they're already all-in on corruption, maybe none of them care at this point.  This feels like a new level of disgusting.  Is it possible for us to reach a new low?  Seems like we've reached a new low.

Donald Trump had a press event at the White House yesterday with Conan, the dog who was involved in the raid that killed Islamic State leader Abu Bakr al-Baghdadi.  First off, Trump threatened to send Conan after reporters, because that's not alarming or anything.   He also once again repeatedly referred to Conan as "he," but didn't we confirm this is a female dog?  Given how hard the White House spun this question after Trump's comments, you can bet the house he got it wrong again.  Is that the world's biggest controversy?  No, except that it drives home the point yet again that the man will lie about anything and everything before he admits he's wrong.  If he'll do it about something so trivial, you know he'll do it when there are real stakes.  Also, never trust a guy who won't pet a dog.

We heard some speculation that the Boston Red Sox might be interested in Rich Hill to help address some of their pitching needs next year.  However, Hill will reportedly have elbow surgery and is expected to miss at least half of the season in 2020.  Maybe it's time for the 40-year-old lefty to start thinking about retirement.

When the Boston Red Sox Triple-A team moves to Worcester, Massachusetts in 2021, they'll be known as....the WooSox.  Giving a team a nickname as a formal name feels forced as hell, but so be it.

The Baltimore Ravens embarrassed the Los Angeles Rams 45-6 last night.  Are the 6-5 Rams the latest team to fall apart after facing the New England Patriots in the Super Bowl?  Maybe they should talk to the Seattle Seahawks and Atlanta Falcons about that.  Also, it's clear that Ravens quarterback Lamar Jackson is legit.  The Patriots will need to figure out how to defend him if they want to have any chance of making it back to the Super Bowl.

For reasons that are unclear, the 0-11 Cincinnati Bengals are going back to veteran quarterback Andy Dalton after having rookie Ryan Finley start for the last three weeks.  This season is lost for the Bengals.  Hell, the Bengals are just lost as a franchise.  Dalton isn't going to do anything to change that, so why not give the rookie a longer opportunity to adjust to the NFL?  Is he so atrocious, they're afraid of losing him for the long haul if they keep him on the field?  What a mess.

Of course, the Washington Redskins always feel compelled to fight for the title of "Biggest Joke in the NFL" even when things are actually going well for them.  Quarterback Dwayne Haskins missed the last play of Washington's win over the Detroit Lions on Sunday because he was busy taking a selfie. Way to stay focused on the big picture, everyone.

In case anyone was wondering, Bill Cosby?  Still garbage.

Okay kids, that's going to do it for now.  We finally had the chance to watch Bohemian Rhapsody yesterday.  On a scale of 1-10, we'd give it about a 7 or 8 overall.  The story was pretty straightforward, but Rami Malek was terrific as Freddie Mercury.  The final 20 minutes where they recreated Queen's iconic performance at Live Aid was outstanding, so let's close things out with a clip from the real thing.  Here's Queen with, "Hammer to Fall," for today's, "Song of the Day."

Man, Freddie Mercury was a hell of a talented performer.  It's such a loss that we didn't get to enjoy him for another 20+ years.

Thanks for stopping by, everyone.  It was great to see you, as always.  Enjoy the rest of your day, be good, and we'll catch up with you again for more coffee soon.  Until next time, that's today's Clearing out the Clutter, and we are outta here.