Welcome back!  Did you remember to turn your clocks back an hour?  We changed the bedroom clock last night to make sure we'd be here on time today, but we've got to switch the rest of them after we're done here.  The smoke detectors also need to be checked, but it's too early in the morning to be listening to such a loud noise.  I guess fall is really here, since it's about 29 degrees outside at the moment.  Thankfully, the heat is working fine.  It's also foggy outside.  The guys think it looks like the opening scene of a murder mystery.  That's all the more reason for us to hang out in here for a while.  There's a fresh pot of coffee on the table, so grab yourself a nice medium DD, and let's clear out some Sunday Clutter.

Oh, before we forget, there's a good chance we won't be able to meet up on Monday.  We've got an appointment first thing in the morning, so we'll try to catch up with you later in the day, but for now, let's assume we'll be back on Tuesday.

A federal judge blocked Donald Trump's proposed requirement that incoming immigrants have health insurance before they're allowed to enter the United States.  The notion that Trump cares about anyone having health insurance is laughable on its face.  His administration has done everything they can to make it harder for current citizens to have coverage with nonstop attacks on the Affordable Care Act.  The Great Pumpkin is looking for any excuse he can find to end all immigration to this country.

Donald Trump went to last night's UFC fight at Madison Square Garden, and in case you were wondering, MMA fans have the same reaction as baseball fans when they see the Great Pumpkin - they boo loudly.  Perhaps that was there response to Trump announcing he's changing his residency from New York to Florida.  In any case, that's got to be a troubling sign for the WWE Hall of Famer - you'd think that audience would be his base. 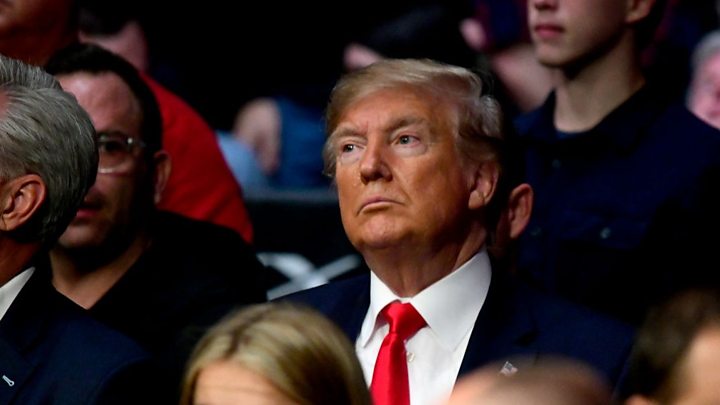 No love for Donald Trump.  Sad.  (pic via bbc.com)

May we all enjoy anything as much as Kate McKinnon enjoys playing Elizabeth Warren on Saturday Night Live:

To be fair, McKinnon also seems to have a great time playing Kellyanne Conway.  Also, we'd be fine with "Conan the Hero Dog" becoming a regular SNL cast member:

It's not surprising to hear that Joe Biden's Iowa support is almost entirely older voters.  A new poll shows that 95% of Iowa Biden voters are least 45 years old, and we'd be willing to bet the numbers don't change much across the country.  He's a safe choice for older generations.  His platform is middle-of-the-road, and he constantly tries to make the argument that he can restore the mythical "good old days" because Republicans will just be nicer with him in office.  The country needs a leader who understands the new challenges facing this country and can help the younger portion of our population find the success that their parents were able to achieve.

Meanwhile, Beto O'Rourke dropped out of the Democratic presidential primary on Friday.  He was a rock star for about the first 48 hours of his campaign but lost momentum quickly after that.  Maybe he can still jump into the Texas Senate race.

Warren Buffett's Berkshire Hathaway is sitting on $128 billion in cash, but Buffett can't find a deal he likes, because prices are so high for everything at the moment.  The Clutter investment team has the same problem, although they're dealing with less cash.  Like, just about $128 billion in less cash.  However, the team got their start largely by reading Buffett biographies, so they understand the value of waiting for a deal.

World Series MVP Stephen Strasburg will reportedly become a free agent.  Strasburg is expected to opt-out of the remaining four years/$100 million left on his deal to test the market.  He and Gerrit Cole are the top two pitching prospects this off-season, so he's likely to get a big offer, but we wonder if he really wants to leave Washington.  Guess we'll have to wait and see.  Speaking of Cole, this blurb from Boston Globe baseball writer Peter Abraham's Sunday baseball column is brutal:

An Astros staffer asked Gerrit Cole if he would speak to reporters after Game 7 of the World Series. “I’m not employed by the team,” said Cole, who became a free agent when the season ended. Cole grudgingly agreed to the interview but first put on a cap with the logo his agent, Scott Boras, uses for his company. Cole prefaced his answer to the first question by saying, “I guess as a representative of myself . . . ”

On the flip side, New York Yankees closer Aroldis Chapman is expected to agree to a contract extension.  This is funny, because we can't remember where we read it yesterday, but there was an "expert" who said Chapman was 100% going to become a free agent.

The New England Patriots face the Baltimore Ravens at Baltimore tonight.  This is the first real test the 8-0 Patriots have had this season, and it will be fascinating to see how the team responds.  Ravens quarterback Lamar Jackson is a fair passer, but the guy can run, and the New England defense has some trouble with that.  The key question tonight is, can they contain Jackson and make him beat them with his arm?  Tom Brady and the New England offense are still a work in progress, so they could be in trouble if Jackson can chew up large chunks of the play clock on the ground.  We lean towards the Patriots figuring out how to beat the second-year quarterback, but it's going to be a close game.

We're a little surprised Josh Gordon lasted long enough in waivers to be claimed by the Seattle Seahawks, but we we're happy for the former Patriots wide receiver and wish him the best of luck with his new team.

This is insane:  We mentioned on Friday that WWE wrestlers had trouble getting out of Saudi Arabia after a PPV event on Thursday.  The most credible explanation going around right now is that Vince McMahon and the Crown Prince got into an argument about McMahon not being paid for several WWE shows.  He retaliated by cutting the feed to the event in Saudi Arabia on Thursday, and that the Crown Prince responded by not allowing the wrestlers to leave after the show.  Can you imagine how freaked out you'd be if you were on that stranded plane, given that we know this regime has no problem beheading people who anger them?  Plus, your boss just left you there as he flew back to the United States.  We would quit on the spot and take our chances if the company tried to go to court to enforce a contract.  Thankfully, it sounds like everyone eventually made it out in one piece.

There's still no update on the possible Doctor Who trailer, which is driving us nuts.  The popular rumor is that it might air on November 15 during the BBC's Children in Need special.  That makes sense, and it would be in line with past years, but 12 days is just so long from now.  We need a TARDIS to jump forward in time a little bit.

BDH and Little Buddha found some Sunday cuteness for you.  They love this clip of Oliver the beagle going through his first car wash, and now they want to know if they can also do it:

Okay kids, that's going to do it for now.  Here's Heart and the Royal Philharmonic Orchestra to close things out with, "Alone," for today's, "Song of the Day."

Thanks for stopping by, everyone.  We're glad things worked out with the clock changes.  Enjoy the rest of your day (and that extra hour), be good, and again, we'll try to catch up with you again on Monday if we can, but otherwise, we'll see you on Tuesday.  Until next time, that's today's Clearing out the Clutter, and we are outta here.