Welcome back!  Come on in, have a seat.  As I've mentioned before, our schedule will be a little funky for a stretch.  We probably won't be around tomorrow, so BDH and Little Buddha were adamant that we catch up with all of you today.  They call the shots - I just do the typing.  I still have to figure out what we're doing for the rest of the day today.  I should probably at least get to the gym at some point.  Well, anyway, I'll work that all out later.  The guys just came in with a fresh pot of coffee, so grab yourself a nice medium DD, because it's time to clear out some Saturday Clutter.

Everywhere you looked, Friday's events made it clear yet again that Donald Trump is right in the middle of the swamp he claimed he would drain.  First, former Ambassador Marie Yovanovitch testified in the impeachment inquiry.  Yovanovitch spoke to lawmakers about the smear campaign launched against her by Rudy Giuliani and his associates so they could conduct their corrupt Ukraine agenda to personally benefit Donald Trump.  She also made it clear that Trump's conspiracy theories about Ukraine are nonsense.  Yovanovitch then discussed how she felt threatened by Donald Trump's criticisms of her in the infamous July 25 call with Ukraine President Volodymyr Zelensky, when Trump said she "was going to go through some things." 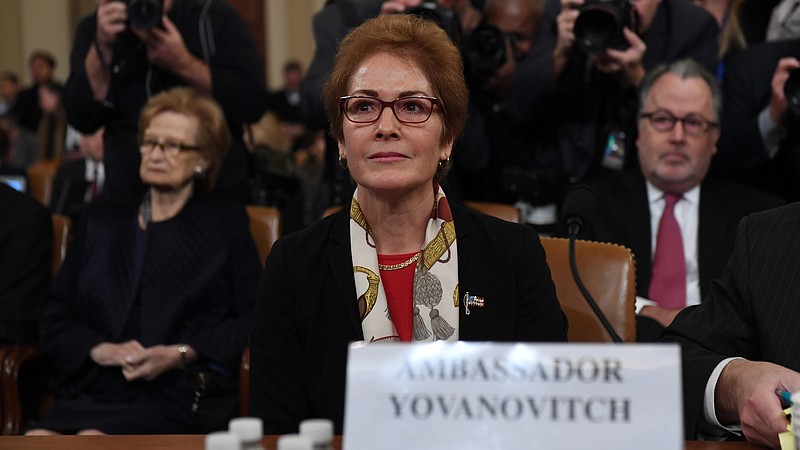 As if on cue, Trump then started attacking Yovanovitch on Twitter, and Yovanovitch said she considered that intimidating.  Let's note that Trump kept silent while George Kent and Bill Taylor were testifying earlier in the week, but a woman speaking out against him?  The Great Pumpkin can't tolerate that.  Even Fox News had to acknowledge that Trump's real-time attacks on former Ambassador Yovanovitch could be seen as witness tampering.

The bad news continued for Donald Trump yesterday as yet another member of his inner circle is heading to prison.  This time it was Trump's ally Roger Stone who was found guilty on seven obstruction/tampering  charges.   Stone was accused of lying to Congress about his dealings with WikiLeaks to get politically damaging information on Hillary Clinton during the 2016 presidential election.  Stone's clearly counting on a pardon from Trump to save him.  The man knows too much to just stay quiet in prison.  The only way we can see that not happening is if Stone suddenly suffers a Jeffrey Epstein-like ending to his story.

Speaking of Epstein, Prince Andrew claims that he has no recollection of meeting an American girl who says says she was forced to have sex with him as a minor while he was staying with Epstein.  That's not really a denial of the accusation.

It's troubling that Mayor Pete Buttigieg is hiding the work he did for McKinsey & Company.  Voters have a right to know what was involved during his three years with the consulting company that apparently took him to places like Iraq and Afghanistan.  We've seen what happens when a candidate isn't transparent about their business dealings.   It's still amazing to us that a 37-year-old mayor of a city with a population of about 100,000, who won't be forthcoming about his work history, thinks he deserves to be in the White House.

It's good to hear that the Texas parole board recommended a 120-day stay of execution for Rodney Reed, a man accused of murdering a woman in 1996.   Hold on, it's even better than that - Reed's execution has been stayed indefinitely by Texas appeals court for further review. What would be the ultimate would be if the death penalty was permanently eliminated as an option.  Capital punishment is a stain on the soul of this country, and it is irreparably biased against the poor and minorities.  Also, just the fact that there's even a chance of the government executing an innocent man should make it forbidden.  A country who executes its citizens has no moral standing.

Cheers to Boston Celtics legend Bill Russell who decided it was time to accept his NBA Hall of Fame ring 44 years after he was inducted.  Apparently Russell didn't believe back in 1975 that he should be the first African-American player to be included in the Hall.  However, he seems to be happy about this, so good for him.

The New England Patriots will be back in action when they face the Philadelphia Eagles on the road tomorrow afternoon.  We admit it, we were unnerved by how easily the Baltimore Ravens picked apart New England's defense two weeks ago.  They need to regroup quickly, because the Patriots offense is still very much a work in progress, to say the least.  The one thing that eases some of our concern is that the Patriots are coming off a bye week, and they're even harder than usual to stop when they've got that extra time to prepare.  It says here the defense shows up and gives Tom Brady just enough room to find a way to win.

The NFL suspended Cleveland Browns defensive end Myles Garrett for at least the rest of the season (including the playoffs), following his fight with Pittsburgh Steelers quarterback Mason Rudolph that ended with Garrett ripping off Rudolph's helmet and hitting him in the head with it.  Garrett can appeal, although he's going to lose, and it's not clear when he will really be able to return to the league.  NFL players hurt each other every week, but Garrett could have done even more serious damage if he'd fully connected with Rudolph's unprotected head, and they're both lucky that didn't happen.

Congratulations to former Boston Red Sox general manager Ben Cherington, who is apparently about to take that role with the Pittsburgh Pirates.  Cherington's got a big challenge in front of him, since it's been ages since the Pirates were even relevant, but we wish him the best of luck.

The Doctor made an appearance at this year's Children in Need telethon last night, and we've lost track of how many times we've watched this clip.  The look of pure joy on this little girl's face when she sees Jodie Whittaker, Tosin Cole, and Mandip Gill, is everything that's great about Doctor Who. We can't wait for the new season.  The first trailer is still a week away, so we'll just watch this a few more hundred times for now:

Nicolas Cage has scored what is probably the perfect role for him:  Nicolas Cage.  Quick show of hands, how many people here remember when Cage was a major box office draw?

Okay kids, that's going to do it for now.  Here's Tori Amos with a live performance of, "Crucify," for today's, "Song of the Day."

Thanks for stopping by, everyone.  It's always great to see you, and it was especially fun to do it on a Saturday for a change.  Enjoy the rest of your weekend, be good, and we'll catch up with you again soon.  Until next time, that's today's Clearing out the Clutter, and we are outta here.