Welcome back!  Come on in, have a seat.  It's terrific to see all of you again.  Sorry we couldn't catch up with you over the weekend, besides to talk about the new Doctor Who trailer, of course.  It was funny (in a scream-inducing way), but the trailer was scheduled to come out at 10:00 in the morning on Saturday.  Right as we were about to hit play on the YouTube video, construction work started outside our window, and all we could hear was a jackhammer.  We had to play the clip about 10 times before we could finally hear the dialogue, but it all worked out eventually.  Anyway, we're back, you're back, and BDH and Little Buddha say that deserves coffee.  They just put a fresh pot on the counter, so grab yourself a nice medium DD, because it's time to clear out some Monday Clutter.

In a stunning development, Navy Secretary Richard Spencer has been forced out after objecting to Donald Trump's repeated interference in the case of a Navy SEAL who was convicted of a war crime.  Trump demands nothing less than total obedience from his subordinates at all times, which is the attitude of a dictator.  We are still wondering why he even got involved with the cases of Eddie Gallagher and two other war criminals in the first place.  It's all about money for Trump, so somewhere along the way, he picked up a paycheck for this meddling and continued undermining of our institutions.  Vladimir Putin must be proud of his little puppet today. 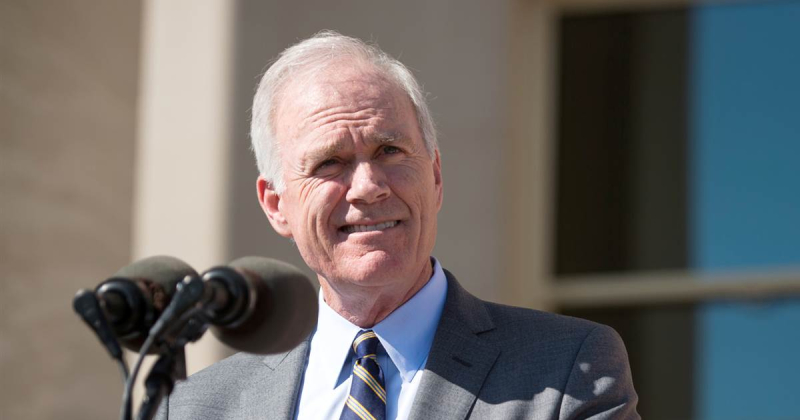 Navy Secretary Spencer was fired for putting his country before Trump.  (pic via nbcnews.com)

Rudy Giuliani's associate Lev Parnas has turned over material to the House Intelligence Committee related to Giuliani's attempts to dig up dirt on Joe Biden.  We'll have to wait to find out more about what exactly is contained in these audio and video clips.  Meanwhile, Giuliani has repeatedly mentioned having "insurance" to protect him from being thrown under the bus by Donald Trump.  Giuliani comes across as unwell in these recent interviews, but one has to wonder what he has on Trump.

Look at that, Representative Devin Nunes doesn't want to talk about the allegations that he went to Ukraine to help Trump's smear campaign against Biden.  Who could have seen that coming?  Nunes is a walking ethics violation who has no business being involved with an investigation into Donald Trump when he's been doing Trump's bidding from the beginning.

Michael Bloomberg formally entered the 2020 Democratic presidential primary yesterday.  Make no mistake about it, Bloomberg isn't in the race to win the White House.  He's here to use his fortune to damage Elizabeth Warren and Bernie Sanders.  A man who can afford to not accept political donations for a presidential run and won't take a salary if elected, is not someone who can relate to the other 99% of the country.  This has nothing to do with "Democrats are nervous about the current field's ability to defeat Donald Trump."  The powers-that-be see that two of the most popular candidates would make significant changes to the status quo that has benefited the wealthy, like Bloomberg, and that terrifies them.

We haven't had a chance to check out Will Ferrell's appearance on SNL last week.  Let's see how the show handled Donald Trump's press conference:

We also heard someone popped up during Ferrell's monologue:

That was a fun meltdown.  We'll go through the rest of the clips later.  Oh, hold on, BDH and little Buddha want to see the Democratic presidential debate skit:

Uber lost its license to operate in London, with officials blaming a “pattern of failures” that had “placed passenger safety and security at risk.”   We shed no tears for any damage incurred by the ride-sharing industry.  They're a net negative on the world, and at some point, we suspect their economic model is going to fail anyway.  Sooner rather than later would be fine.

The last time we checked, it seemed that the consensus of the day was that fish oil pills didn't provide any significant benefit.  Now it appears that they can reduce your chances of a heart attack or a stroke if you take them in high doses.

The New England Patriots beat the Dallas Cowboys 13-9 in messy conditions in Foxboro yesterday to improve to 10-1 on the season.  As has been the case all year, the pressure was on the Patriots defense to carry the bulk of the responsibility for the game, while Tom Brady continues to figure out what he can do on offense with everyone who isn't named Julian Edelman.  The defense did their job, holding the top-ranked Dallas offense to the three field goals, and there were encouraging signs for the offense with rookies N'Keal Harry and Jakobi Meyers.  Harry had the first touchdown reception of his career, and Meyers had a few drops, but he still ended up with four receptions for 74 yards.  It also didn't hurt that running back Sony Michel had his first decent game in a while, with 20 carries for 85 yards.  It's hard to take much from this game, given the weather, but hopefully the Patriots offense will be able to build on this when they face the Texans in Houston on Sunday night.

Hey, we've got a new Star Wars The Rise of Skywalker trailer to check out:

Will Faith No More be the next group to announce a reunion?   It seems to be the cool thing to do these days.  The band's website has an announcement scheduled for Tuesday, so let the speculating begin...

Okay kids, that's going to do it for now.  Here's Volbeat to close things out with, "Last Day Under the Sun," for today's, "Song of the Day."

Thanks for stopping by, everyone.  It was great to catch up with you.  Enjoy the rest of your day, be good, and we'll do this again soon.  Until next time, that's today's Clearing out the Clutter, and we are outta here.