Welcome back, and a happy Friday to you all.  What's the plan for the weekend?  The major items on our to-do list are to watch the Patriots game, and to take as many of the bagged leaves/yard waste out of the garage as possible before the city starts picking them up Monday morning.  I think there's something like 15 bags in there, so it may take two weeks to get rid of all of them.  Oh, quick programming note, our schedule may be a little funky for the rest of the month.  To start with, we may end up seeing you again tomorrow instead of Sunday.  Hopefully that will be the only disruption, but BDH and Little Buddha don't want you to worry if we go missing for a day here or there.  We'll be back soon.  In the meantime, the guys say the coffee is ready, so grab yourself a nice medium DD, and let's clear out some Friday Clutter.

House Speaker Nancy Pelosi says the impeachment inquiry has revealed evidence indicating Donald Trump engaged in bribery, which, as described in the Constitution, is one of the categories for impeaching a White House occupant and removing him from office.  Trump's attempt to withhold military aid to Ukraine, unless the country's president agreed to a corrupt investigation of the Biden family and alleged interference in the 2016 presidential election, for Trump's own personal gain, clearly falls under that label.  The question with all of this is what will it take for Republicans to stop defending the pervasive corruption that has eaten away at our democracy.  The GOP has abandoned all pretense of caring about this country or our collective national interests in favor of maintaining their grip on power at all costs.

Ukraine President Volodymyr Zelensky was reportedly hours away from caving into Donald Trump's demands for a baseless investigation of Joe Biden, before the whistleblower changed everything.  We understand that this individual's identity is being kept secret for his/her own safety, but it would be nice to learn the name of this American hero someday.

Former US ambassador to Ukraine Marie Yovanovitch is scheduled to speak at today's impeachment hearings.  Yovanovitch, who was ousted as ambassador after a smear campaign by Rudy Giulaini and his associates,  is expected to discuss among other things, Guiliani's inappropriate direction of United States policy regarding Ukraine.

At least two other people heard Donald Trump's cellphone call with European Union Ambassador Gordon Sondland regarding the attempts to pressure Ukraine into doing Trump's dirty work.    Plus, there's a good chance the Russians were also listening.  Remember when Republicans pretended to care about email servers?  Somehow, they're going to find a way to argue that this glaring lack of security/gross incompetence still doesn't measure up to anything Barack Obama or Hillary Clinton ever did.  These people need help, and this reality show needs to be cancelled.  Someone should tell Trump that if he allows Pelosi to tell him "you're fired" on-camera, it would get historically high ratings, and he could probably find a way to make money off of it.  Who says no? 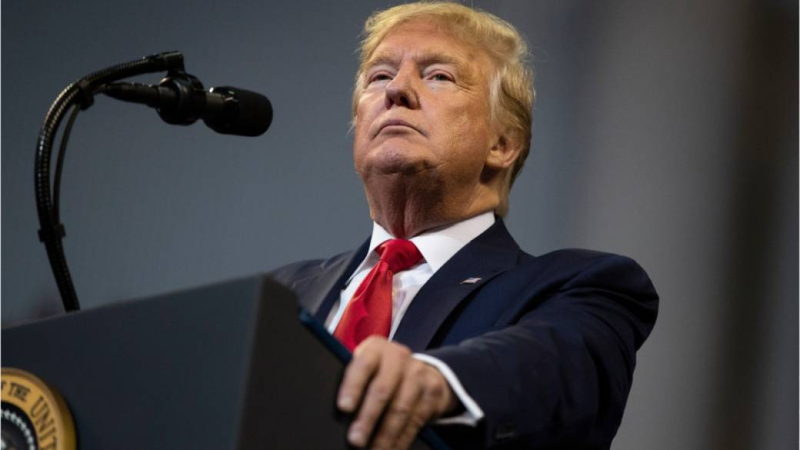 Lock him up.  (pic via globalnews.ca)

We're pleasantly surprised to see that Kentucky Republican Governor Matt Bevin finally conceded in his re-election race against Attorney General Andy Beshear yesterday.  That race seemed ripe for Republican shenanigans to steal the office if given the opportunity.  However, it appears that Behsar's margin of victory is holding up and is too much for the GOP to challenge.

It's heartbreaking to hear about yet another school shooting, this time in California, that left two dead and three wounded.  The plague of gun violence continues in this country without pause, and Republicans continue to throw up their hands and say, "nothing we can do," as they grab every last NRA-campaign contribution they can find.

New Jersey says Uber owes it $650 million in fines and back taxes for improperly classifying its drivers as independent contractors instead of employees.  As we said here recently, we see no positives to the ride-sharing industry.  It's bad for the environment to have more cars on the roads, and it's also clear these companies are trying to avoid paying their fare share.

Someone needs to explain to us how Robert F. Kennedy Jr. became one of the leading anti-vaxxers in this country.  According to a new report, RFK's son is one of Facebook's top anti-vaccination ad sponsors, and those ads are a public health threat.

Good job everyone:  Smoking reached another low in the United States in 2018.  However, roughly 34 million people are still smoking, so the fight's not over yet.

Los Angeles Angels outfielder Mike Trout won his third MVP award yesterday.  Trout's amazing, but he's proof that MVP voters can ignore a team's standings when they make their decision, so we don't want to hear that "winning matters" when it comes to these decisions.

Gabe Kapler's stint as the manager of the San Francisco Giants is off to a bad start.  More people want to talk to Kapler about his inappropriate response to a sexual assault allegation while he worked for the Los Angeles Dodgers front office, than what his pitching rotation will look like in 2020.  While some will suggest that all of this will be forgotten if Kapler wins with the Giants, there's nothing about his 161-163 career managerial record to suggest that's going to be an issue.

The Pittsburgh Steelers thought they were in for an easy night against the Cleveland Browns on Thursday.  However, the Steelers lost 21-7, and the game ended with an ugly fight that saw Browns defensive end Myles Garrett hit Steelers quarterback Mason Rudolph in the head with Rudolph's own helmet.  The only question now is the length of Garrett's upcoming suspension.

Many people consider Dwayne "the Rock" Johnson to be a superhero.  Now he'll finally be playing one in the movies.  Johnson will star in a Black Adam movie that will open on December 22, 2021, according to his Instagram account.  Technically, Black Adam is a villain, but who in their right mind is going to boo the Rock?  We can only hope the guy can find a way to keep busy between now and then.  He always seems to have a lot of free time on his hands.

Cheers to Guardians of the Galaxy star Dave Bautista for adopting two abandoned pit bulls from a Florida animal shelter.  Maggie and Ollie sure hit the jackpot.  Click on the link to check out the picture of these two cute pooches with their new dad.

(Supernatural spoilers ahead:) This week's Supernatural felt like the beginning of the final ride.  It was fun to see a long-gone familiar name return.  However, the big story was that the Winchester boys learn Chuck is still here and that he's planning for this story to end with Sam and Dean killing each other.   The final few minutes of the episode sealed the deal for us, between Sam freaking out about what his dreams/visions mean, and Dean's despair over the idea of having to fight God.  Buckle in, folks, here we go...

Okay kids, that's going to do it for now.  Think we're in the mood to close things out with some Linkin Park, and let's add Jay-Z while we're at it.  Here they are teaming up on a "Numb/Encore" mix for today's, "Song of the Day."

Thanks for stopping by, everyone.  It was great to see you, as always.  Enjoy the rest of your day, be good, and we'll catch up with you soon/probably tomorrow.  Until next time, that's today's Clearing out the Clutter, and we are outta here.