Welcome back.  How are you?  Any big plans for the weekend?  I think we're mostly just going to celebrate that this week is over.  We're still bummed out about the Clutter Tree, and there have been a handful of other annoyances which have us grumbling.  Everything went sideways as soon as we changed the clocks back, I tell you.  BDH and Little Buddha just said the high for today will be 37 degrees.  Yikes.  At least the heat works.  Well, enough griping, let's check out today's headlines.  The guys made coffee, so grab yourself a nice medium DD, because it's time to clear out some Friday Clutter.

Billionaire Michael Bloomberg is apparently getting ready to enter the 2020 Democratic presidential primary.  He and fellow rich guy Tom Steyer could be spending their fortunes helping Democrats win the White House, take back the Senate, and do all sorts of good in state races across the country, but instead, they've got to stroke their own egos.  The wealthy trying to buy elections is bad for democracy whether it's a Democrat or Republican.  Ordinary people lose every time that happens.  Bloomberg's rumored candidacy has to be seen as a rebuke of Joe Biden's campaign so far.  If Bloomberg  does in fact join the field, that could also be bad news for Kamala Harris, Mayor Pete, and everyone else who isn't Bernie Sanders and Elizabeth Warren., who would both jump at the chance to run against a member of the top 1%. 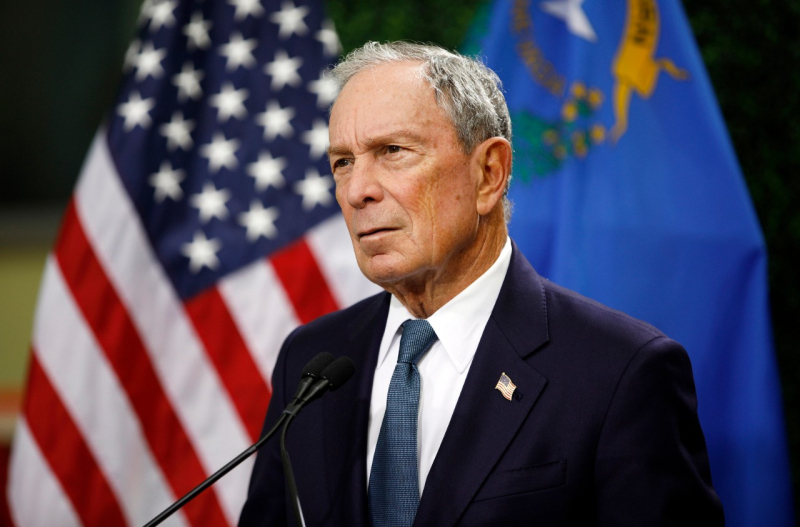 An already-crowded field doesn't need another candidate.  (pic via ctvnews.ca)

Donald Trump has been ordered to personally pay $2 million to a group of nonprofit organizations as part of a lawsuit against the now-defunct Trump Foundation.  This guy's corruption is everywhere you look.

Acting White House chief of staff Mick Mulvaney has been subpoenaed to appear before the House Intelligence Committee as part of the impeachment inquiry.    Mulvaney is not expected to attend today's hearing, thus continuing the White House's obstruction of the inquiry at every opportunity.  However, we all remember that Mulvaney already confirmed that Donald Trump extorted Ukraine to pressure them to investigate/make up stories about the Biden family and the conspiracy theory about the country's interference in the 2016 presidential election.  It was kind of Mulvaney to make those comments while in front TV cameras.  At some point, you have to wonder if Republicans will try to pin everything on Mulvaney to save Trump.  He better have himself a good lawyer.

Is Attorney General William Barr already distancing himself from Donald Trump?  It seemed like he would do anything his boss asked, but Barr refused to hold a press conference absolving Trump of any legal wrongdoing re: the Ukraine call.  Does he already have an eye on image rehab after he leaves this job?  Anyone who works for this administration should have that hanging over them for the long haul.

An upcoming book from a supposed Trump senior official is getting a lot of media attention for its negative portrayal of the Great Pumpkin.  We're curious to check it out, but so far, it sounds like confirmation of the dysfunctional dumpster fire Bob Woodward portrayed in his 2018 book, Fear.  A Warning will be out on November 19.

Donald Trump will be attending tomorrow's Alabama - LSU football game, as he continues to look for a sporting event where the crowd won't boo him.

Donald Trump attack dog Rep. Jim Jordan has been accused by a second man of ignoring a sex abuse scandal while Jordan was an assistant wrestling coach at Ohio State University.  Forgive us if we don't listen to Jordan every time he rants about "doing the right thing," since it's a topic with which he has no experience.

The newest list of Sears store closings includes one near the Northern Estate, so we will make plans to check out the liquidation sale in December.  Maybe we can get a good price on a new refrigerator.  Does anyone else here remember the old Sears catalogs?  We used to spend hours back in the day flipping through the one that came out right before Christmas.  There were all sorts of toys we hadn't seen before.  It was like an early version of shopping on the Internet.

Troubled wide receiver Antonio Brown can't make up his mind about whether to blast the NFL or claim he's eager to play again.  Either way, we're glad he's not the New England Patriots' problem anymore, even if they do still end up owing him $9 million.  Any team who signs this guy deserves the chaos he'll bring to their organization.

Football analyst Cris Carter was fired by Fox Sports.  No reason has been given yet, but the network is reportedly investigating something to do with Carter, so we'll wait to find out what that's all about.  It seems like Carter lost his value as a talking head years ago when he told NFL rookies in 2015 to have "a fall guy" for any legal problems.

Congratulations to Mookie Betts and Xander Bogaerts on winning AL Silver Slugger Awards yesterday.  It's a good thing the Red Sox already signed Bogaerts to a contract extension, because his value is just going to keep rising for years to come.  Meanwhile, Red Sox fans continue to wait to see what the team does about Betts.

The Houston Astros are starting the off-season with a front office shakeup that pushes Hall of Famer Nolan Ryan out the door and demotes his son Reid.  It's not clear yet whether this is connected to the team's atrocious handling of the Brandon Taubman story.

We're not looking to jump too far into the future here (besides waiting for the next season of Doctor Who in 2020.)  However, it's nice to know we've got Benedict Cumberbatch in the next Doctor Strange movie to look forward to in May 2021.

Oh hello - there's a Weeds sequel in the works!  We loved that series, and Mary-Louise Parker makes us weak in the knees.  There's certainly plenty of ground for them to cover since the show went off the air in 2012, given the growing legalization of marijuana in the United States.  This is outstanding news.

We'll try to hold back on the spoilers here, but last night's Supernatural episode felt like it was mostly there to set up the rest of the season.  We say that as a good thing, because it looks like the Winchester brothers are in for one hell of a wild final ride.  Also, there were a couple of familiar faces we weren't expecting to see again.  It's nice that the show continues to work in these cameos in the show's final season.

Okay kids, that's going to do it for now.  You know what we need to close out this week?  We need a new tune from Ozzy, and he must have read our minds, because here's, "Under the Graveyard," for today's, "Song of the Day."

Thanks for stopping by, everyone.  Hanging out with you is always good for our spirits.  Enjoy the rest of your day, stay warm, and we'll catch up with you again soon.  Until next time, that's today's Clearing out the Clutter, and we are outta here.