Welcome back!  How are you?  Did anyone else have a weird day yesterday?  I was in trouble right from the start.  Didn't feel that focused when I woke up, (hopefully) got it together in time to hang out with all of you, and then it was just hard to focus for the rest of the day.  I ended up being somewhat productive when it was all said and done, but every activity felt like a challenge.  Don't know what that was all about.  BDH and Little Buddha think I was just dealing with the fact that it's already October.  They expect everything to be fine today.  I'm happy to go with that.  I'm also happy about the fact that they made coffee.  Grab yourself a nice medium DD, and let's clear out some Wednesday Clutter.

Secretary of State Mike Pompeo is already doing his best to prevent Congress from investigating the Ukrainian whistleblower complaint by refusing to make staff available to testify.  House Democrats warned Pompeo that they won't tolerate witness intimidation, and that the Trump administration's continued obstruction of their inquiry could result in its own article of impeachment.  Pompeo claims he's protecting his staff, the same people who he's having investigated for any connection to Hillary Clinton's email server.  Given the fact that Pompeo was part of Donald Trump's July 25 call with Ukrainian President Volodymyr Zelensky, he should have no role in how the State Department responds to Congress in this matter. 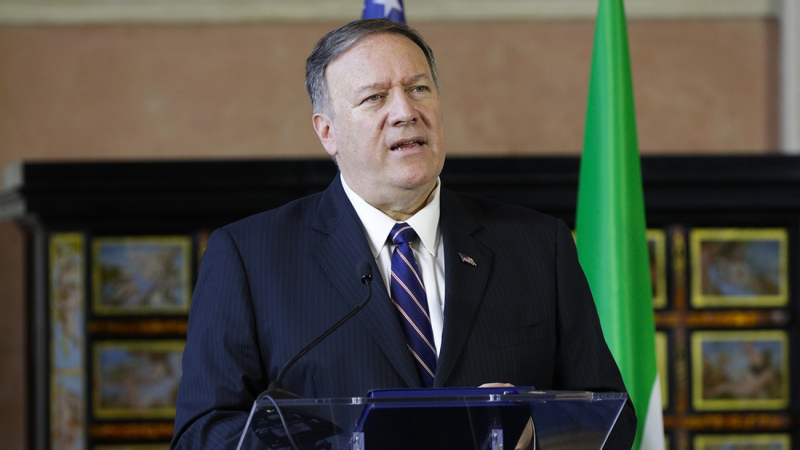 Secretary of State Pompeo is just another part of the swamp.  (pic via abc7.com)

There's a new poll that says only 40% of Republicans think Donald Trump talked to President Zelensky about Joe Biden, despite the transcript and Trump's own comments confirming that it happened.  What are the rest of us in the reality-based dimension supposed to do with the 60% of Republicans who are living in this imaginary world?  Those are the folks that Donald Trump is counting on to save him, because any examination of actual facts takes Trump out of office and puts him in prison.

Another poll shows Senator Elizabeth Warren is steadily improving her popularity with African-American voters.  That's a key constituency for Democrats, and Joe Biden in particular is counting on them to save him in the South Carolina primary.

Facebook boss Mark Zuckerberg is worried about an Elizabeth Warren presidency, which is just one more sign that she's on the right path.

Senator Bernie Sanders raised $25.3 million in the third quarter, so while his poll numbers may be slipping, he's not going anywhere yet.

A federal judge temporarily blocked the new California law that requires presidential or gubernatorial candidates to submit copies of their tax returns with the secretary of state's office.   California officials are expected to appeal the ruling, but we'd like to hear how they argue that the law is constitutional.  We're not lawyers, and we never played them on TV, but we did take a constitutional law class one semester, and this doesn't seem like it would pass the smell test, as much as we'd like to see Donald Trump be forced to release his returns.

Johnson & Johnson agreed to a $20 million settlement to get rid of two Ohio lawsuits regarding the company's role in the opioid crisis.  That's $10 million for a fine, with $5 million to cover legal costs and about $5 million in donations to various related charities.  That seems like a drop in the bucket for the pharmaceutical giant.

We're not buying a new study that says eating beef and processed meats is fine for humans.

Here's hoping Brock Holt wasn't saying goodbye with this Instagram post.   Brock was valuable to the Boston Red Sox both on the field, where he played almost every position, as well as off the field, where he led the team's Jimmy Fund efforts this year.  Holt was easy to root for, and he will be missed if his seven-year run with the team has come to an end.

The Washington Nationals stunned the Milwaukee Brewers 4-3 last night to advance to the NLDS against the Los Angeles Dodgers.  Things got off to a bad start for Washington when ace Max Scherzer gave up three runs in the first inning, but the Nationals came back with four in the eighth to win the game.  Apparently there is life in Washington after Bryce Harper.

As if being a Miami Dolphins fan wasn't already hard enough this year, now they've got to worry about things like a vendor trying to charge them $724 for two beers.

Tonight will be a historic evening for the world of professional wrestling when AEW Dynamite makes its debut on TNT.  Led by Cody Rhodes (son of the legendary Dusty Rhodes), featuring Hall of Famer Chris Jericho as its current champion, and funded by Jacksonville Jaguars co-owner Tony Khan, AEW is looking to provide the biggest challenge to WWE that Vince McMahon and company have seen in decades.  We'll be focused on NBC's "One Chicago" programs but will be recording Dynamite.  We wish everyone in AEW the best, because a shake-up would be good for this industry.

Not sure if we're in on the upcoming Netflix movie 6 Underground, starring Ryan Reynolds as part of a group of mercenaries.  Michael Bay movies are always visually interesting, so we'll give it 10 minutes to make its case when it comes out in December.  Check out the trailer:

Hey Nirvana fans - here's your chance to buy Kurt Cobain and Courtney Love's former house in Seattle.  You can have it for the low price of $7.5 million.  For those who are wondering, it sounds like the room where Cobain took his life has been removed.

Okay kids, that's going to do it for now.  Here's Alice in Chains to close things out with, "Private Hell," for today's, "Song of the Day."

Thanks for stopping by, everyone.  It was great to see you, as always.  Oh, BDH and Little Buddha want to make sure you know you're welcome to join us for "One Chicago" tonight.  Otherwise, be good, and we'll catch up with you again soon.  Until next time, that's today's Clearing out the Clutter, and we are outta here.