Welcome back!  How are you?  BDH and Little Buddha already finished the books we checked out of the library this week, and there weren't any new releases that caught their eye, so any recommendations you may have would be great.  Besides that, yesterday was pretty productive, which felt good.  The big win was wrapping the windows that need it before the colder weather gets here this weekend.  It's amazing how much they help, and it's only something like $10 for a box of nine sheets.  I've got no doubt they will pay for themselves by the end of November.  Anyway, the guys say the coffee is ready, so grab yourself a nice medium DD, and let's clear out some Wednesday Clutter.

Lieutenant Colonel Alexander Vindman testified before impeachment inquiry officials yesterday.   He reportedly again confirmed that Donald Trump's July 25 call with Ukraine President Volodymyr Zelensky involved Trump pressuring Zelensky to investigate Joe Biden, and that the "transcript" the White House released of the call was incomplete.  This is the first time that someone who was listening to that call has confirmed this abuse of power with members of Congress, and all Donald Trump can do is call this decorated soldier a "never Trumper."   (Meanwhile, former Congressman /Real World star Sean Duffy basically accused Vindman of being a traitor.)

What's fascinating is that Trump's tweet attacking Vindman calls on him to read the written account the White House provided of the call.  Lt. Col Vindman heard the call the first time, so he's in position to point out its flaws.  Also, even if it's incomplete as Vindman says, what was made public is enough by itself to show Trump committed a crime.  The Great Pumpkin must have realized that by now, but in for a penny, in for a pound. 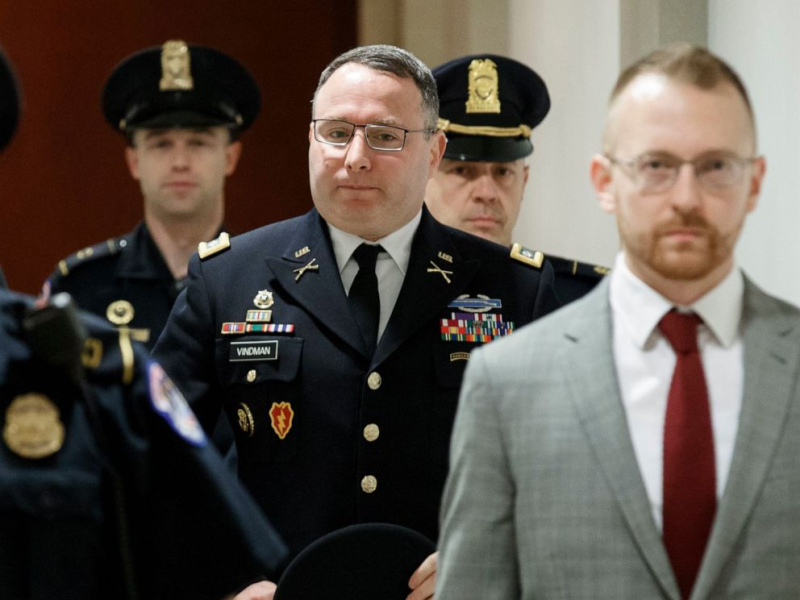 Nothing angers the White House more than a man who puts his country before Donald Trump.  (pic via abcnews.go.com)

House Democrats released the guidelines for their impeachment inquiry yesterday, with a vote to approve them scheduled for tomorrow.  Republicans are screaming as loudly as they can that it's too little too late, despite a federal judge recently reconfirming the inquiry's legitimacy.  The GOP can't defend Trump's actions, so all they can do is hope to distract everyone by complaining about the process.

Senate Majority Leader Mitch McConnell will do whatever it takes not to comment on Donald Trump's corruption. Mitch is getting his conservative judicial nominees and tax cuts, and he's not going to do anything to upset that, the rest of the country be damned.

In case any Trump supporter actually believed his campaign pledge to eliminate the national debt, we've got some bad news for you:  It's gone up 15% since he's been in office.  The federal deficit is also bigger, thanks in large part to Trump's tax giveaway.  Who could have guessed the guy with multiple bankruptcies isn't good with money?   Before they say it, let us guess, none of this matters while a Republican is in the White House.  However, once a Democrat is in there again, the GOP will try to claim with a straight face that they're the party of "fiscal responsibility."

George Papadopoulos, the former Trump aide who was largely responsible for the launch of the Russia investigation, is running for Congress to replace departing-Representative Katie Hill.  That's gross.  Representative Hill had about a 9 point margin of victory in 2018, and Hillary Clinton won by 6.6 points in 2016, so it's hard to imagine California's 25th Congressional District going Republican this time around.  Hopefully the Democratic nominee will make swift work of this guy.

California remains on fire, and as far as we can tell, Donald Trump hasn't said a word about it.  Apparently everyone in the blue states can die, as far as he's concerned.

The 4th quarter tends to be a positive one for stocks, so maybe the Clutter investment team will just go on fall sabbatical and get a head-start on their Christmas shopping.

The Washington Nationals beat the Houston Astros 7-2 in Game 6 of the World Series last night.  There's not much that we enjoy more than a Game 7 (as long as the Red Sox aren't involved, because that just makes us nauseous the whole time.)  It's winner-takes-all when the two teams play tonight, and we're pulling for the Nationals to bring home their first championship in franchise history.  Also, does someone want to check in on Bryce Harper and make sure he's okay?

The NFL trade deadline came and went without the New England Patriots making any deals.  However, the Patriots released kicker Mike Nugent and are reportedly signing Nick Folk as his replacement.  We just mentioned to Dad Clutter last Sunday how we had no allegiance to Nugent so far, and this move is fine with us.  However, we have to admit it's a little jarring to watch the Patriots have a kicking carousel after 20 years of consistency at the position.

Ozzy's got a new album coming out in January, according to Sharon Osbourne.  That will give us something to look forward to as we are in the middle of powering through the winter.

The first trailer for Steven Moffat's new Dracula series is here.  We generally enjoy everything we've seen from Moffat, whether it be Doctor Who or Sherlock, but vampires are not our thing.  If they're up your alley, check out this clip and then prepare for the series to arrive on BBC One and Netflix:

Okay kids, that's going to do it for now.  Marilyn Manson is back with a cover of an old gospel song, so let's have him close things out with, "God's Gonna Cut You Down," for today's, "Song of the Day."

You know what, let's also include Johnny Cash's version while we're here:

Thanks for stopping by, everyone.  It's always great to see you.  BDH and Little Buddha want you to know you're welcome to come back tonight if you want to watch the World Series with them.  However, they have to warn you that there will probably be a lot of channel-switching between the game and tonight's "One Chicago" shows.  Hmm, maybe we better just record those for tomorrow.  In any case, if that works, great, and if not, enjoy the rest of your day, be good, and we'll do this again soon.  Until next time, that's today's Clearing out the Clutter, and we are outta here.