Welcome back!  Come on in, have a seat.  It looks like October is off to a wet start.  That's fine.  Even though we're in the process of cutting back the garden, the plants can still use a good watering until the temperatures drop a little more.  We also need to start thinking about what BDH and Little Buddha will be for Halloween this year, so drop us a line at bitsofclutter@gmail.com if you have any suggestions.  In the meantime, let's check out today's headlines.  The guys just made coffee, so grab yourself a nice medium DD, because it's time to clear out some Tuesday Clutter.

Secretary of State Mike Pompeo has been pretending like he didn't know much about the Ukrainian whistleblower issue.  However, it turns out that Pompeo was on the July 25 call between Donald Trump and Ukrainian President Volodymyr Zelenskiy, where Trump tried to force Zelenskiy to make up dirt on Joe Biden.  The corruption in this administration runs wide and deep.  Who could possibly trust Pompeo to act honestly as this country's top diplomat when he's just spent the last 10 days doing his best Sargent Shultz impersonation?

A Fox Business News host criticized Donald Trump's demand to learn the identity of the Ukrainian whistleblower, as Fox continues to slowly tiptoe away from the Great Pumpkin.

Three House committees subpoenaed Rudy Giuliani for documents related to the call with President Zelenskiy.  We'll see how this plays out, but Giuliani has turned into such a rambling loose cannon, one can only imagine what he'd end up saying if he's eventually also forced to testify before Congress.  It would be a fitting end to this mess if he ended up being the one to bury Trump. 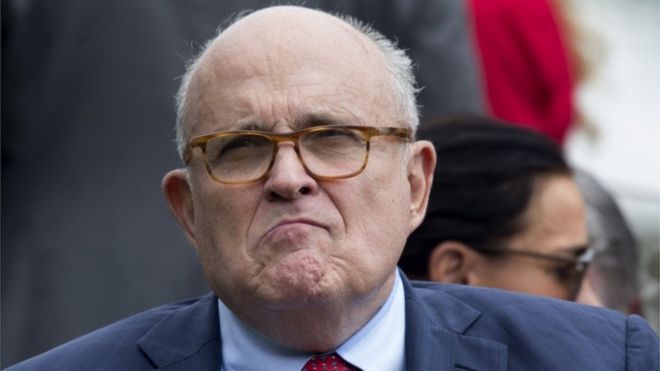 "Hmm, which secret should I reveal next?"  (pic via bbc.com)

Donald Trump wasn't content with just pressuring Ukraine to help him save his own skin.  Trump reportedly recently reached out to Australia and several other countries to help him fight back against the Mueller Report.  We were under the impression Trump was "exonerated" by Mueller, so what's there to contest?  Attorney General William Barr was fully aware and involved in this attempt to extort these other countries, as he's weaponized the Department of Justice against anyone who is investigating Trump's misdoings.  This entire administration is the swamp.

Meanwhile, House Democrats are in court to try to get Robert Mueller's grand jury materials, and they argued yesterday that the records may show Donald Trump lied to Mueller about his campaign's dealings with WikiLeaks.

A new CNN poll shows that almost half the country supports impeaching and removing Donald Trump from office.  47% of respondents support that approach, which is up from 41% from a May poll.  The biggest danger sign here for Trump is that most of the increase came from Republicans.  Given the incessant wave of scandals drowning the White House, and Trump's inability to deliver a coherent defense, there's no reason to think this trend is going to stop anytime soon.

Mike Scioscia was the Los Angeles Angels manager for 19 years, but successor Brad Asmus got the boot after just one season.  It appears that Angels ownership is interested in bringing former coach Joe Maddon back now that he's done with the Chicago Cubs.  (Of course, a 72-90 record didn't help Asmus.)  Maddon was with the Angels from 1993 to 2005 before becoming the manager of the Tampa Bay Rays.

The Pittsburgh Steelers stomped the Cincinnati Bengals  27-3 last  night, so the 1-3 Steelers no longer have to worry about going winless for the season without Ben Roethlisberger after all.

Now that the Boston Red Sox are done for the season, maybe we should check out some of these new TV shows.

Jerry Seinfeld won a copyright lawsuit regarding his Netflix show, Comedians in Cars Getting Coffee.  It's worth mentioning that he won because the statute of limitations had run out on the claim, not because the merits of the argument were addressed.

We've got the announcement video for season 4 of Stranger Things, and it comes with a simple message.  Have a look:

David Lee Roth said again in a recent interview that Van Halen is "finished," and the singer again implied that Eddie Van Halen may be dealing with some health issues.

Okay kids, that's going to do it for now.  Here's Heart to close things out with, "Crazy on You," for today's, "Song of the Day."

Thanks for stopping by, everyone.  It was great to see you, as always.  It looks like it might have stopped raining.  Wait, maybe not.  Anyway, enjoy the rest of your day, be good, and we'll catch up with you again soon.  Until next time, that's today's Clearing out the Clutter, and we are outta here.