Welcome back!  How are you?  We were somewhat productive here yesterday, so that was good.  I got through about half of the to-do list.  That included a trip to the library to get BDH and Little Buddha some new books, so they were happy.  The only problem is that they're almost done with both of them, so it's off to the bookstore later today, and then we'll get to the rest of the list.  The guys say not to rush, because they are excited to hang out with all of you first.  They made a fresh pot of coffee, so grab yourself a nice medium DD, and let's clear out some Tuesday Clutter.

Speaker Nancy Pelosi announced that the House will vote on Thursday to formalize the structure of its impeachment inquiry.  This is something Republicans have been clamoring for, but of course they're already moving the goalposts again, saying it's too late.  However, it remains clear that the GOP is losing every argument against impeachment, and they're down to one:  Donald Trump is corrupt, and we don't care. 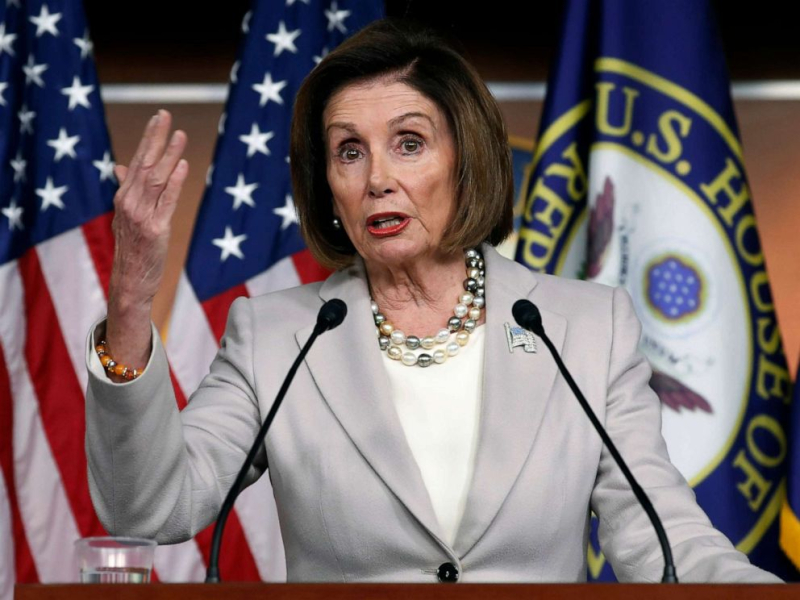 Speaker Pelosi to Republicans:  Be careful what you ask for, you just might get it.  (pic via abcnews.go.com)

Army Lieutenant Colonel Alexander S. Vindman will speak to impeachment officials today about Donald Trump's infamous call to Ukraine Volodymyr Zelenskiy.  Lieutenant Vindman was one of the people listening in on the July 25 call, and he's expected to confirm that Trump asked President Zelenskiy to investigate Joe Biden.  If this is indeed the case, the identity of the whistleblower doesn't matter at all anymore, because we're now talking about someone with direct knowledge speaking about the call.  What argument do we think Trump will throw out today?  He doesn't know Vindman?   His Ukraine expert didn't really do anything for him?  Does he have the gall to accuse Vindman of being a pawn/traitor? His allies must be praying he doesn't make them defend that.   Place your bets.

The federal judge who will decide whether or not a former White House official has to testify in the impeachment inquiry, is putting the case on the fast-track.  Judge Richard Leon wants to hear from both sides on Thursday.  Donald Trump wants to delay everything at all costs, so this quick timetable is already a setback for him, and if he ends up losing here, that could open the floodgates for witnesses to appear before Congress.

To the surprise of no one, even Pentagon officials admit Donald Trump's account of Abū Bakr al-Baghdadi's death doesn't have a lot of grounding in reality.  Trump's comment about Baghdadi "whimpering like a dog" seems to have come from the voices in the Great Pumpkin's head.  The man lies as naturally and often as the rest of us breathe.

A 21-year-old woman is being charged with involuntary manslaughter in the suicide death of her ex-boyfriend.  It sounds like Inyoung You was severely abusive to Alexander Urtula, and that's awful.  However, there's one person who is responsible for a suicide, and that's the person who takes their own life, (unless we're talking about a medical professional who failed to perform their duties.)  Criminal cases like this may be well-intentioned.  However, they minimize the person who died in a misguided pursuit for "justice" and don't help us increase our understanding of mental health issues and how to help people who are in a crisis.

The S&P 500 hit an all-time high yesterday, so the Clutter investment team would also like to find some new books to read while they wait for something to do with our portfolio.

Facebook is introducing a new healthcare tool, and we can't explain how excited we are not to use it.  It's designed to encourage users to get age-appropriate medical testing, and will connect a person with a healthcare provider if needed.  Meanwhile, the user just hands all of that personal information over to Mark Zuckerberg?  No thank you.  Nope.  Nope....nope. Not a chance.

Game of Thrones showrunners David Benioff and Dan Weiss won't be making the next Star Wars trilogy after all.  Given how poorly people responded to the GoT finale, this doesn't really seem like a loss.

Legendary movie producer Robert Evans died yesterday at age 89.  The colorful Evans was considered a Hollywood king in the 1960's and 70's, and he oversaw such classics as The Godfather, Chinatown, Harold and Maude, The Odd Couple, and Rosemary's Baby.

Following up a story from yesterday: Jared Padalecki's arrest over the weekend isn't expected to impact Supernatural's final season.  The actor was charged on Sunday with two counts of assault and one count of public intoxication after an incident at a bar in Texas.

Okay kids, that's going to do it for now.  Let's see, how about we have Glenn Frey close things out with, "You Belong to the City," for today's, "Song of the Day."

Glenn Frey doing songs for Miami Vice in 1985 was a perfect trifecta of singer/show/year.

Thanks for stopping by, everyone.  We hope you enjoyed it as much as we did.  Have a good rest of your day, stay out of trouble, and we'll catch up with you again soon.  Until next time, that's today's Clearing out the Clutter, and we are outta here.