Welcome back, and happy Halloween to you all!  It's supposed to be a rainy Halloween here, but that's actually fine for us.  BDH and Little Buddha get shy at the idea of going outside, so we'll stick with our usual plan - There will be little stacks of candy spread throughout Clutter Headquarters, and then I'll be ready to hand them out as the guys go to each room.  I just have to make sure they don't eat too much of it before they go to bed, because they can get wound up when they're on a sugar rush.  Anyway, it should be fun.  Speaking of fun, the guys say the coffee is ready, so grab yourself a nice medium DD, and let's clear out some Thursday Clutter.

The bad news just keeps coming for Donald Trump:   The  House will vote on their resolution formalizing the impeachment process today, and more witnesses from inside the administration keep appearing before Congress to testify about his corruption.  The resolution gives Republicans everything they claim to want, but it's clear the GOP's plan is to throw mud at the wall for as long as they can to try to distract from Trump's behavior. Decision time is coming for Republicans, particularly in the Senate:  Are they prepared to follow the Great Pumpkin right off the cliff?  Trump is trying to make the decision easier for them with his favorite approach: paying for their support. 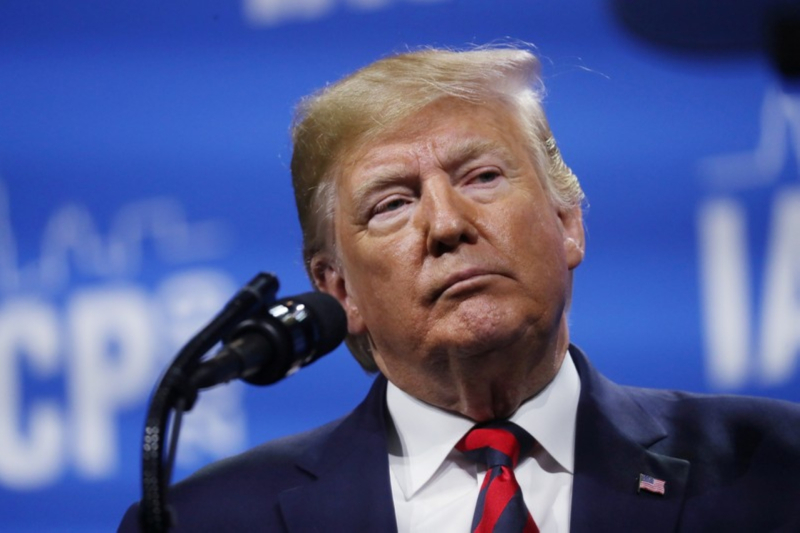 Name your price.  (pic via thestar.com.my)

Senator Kamala Harris' presidential campaign is apparently in trouble.  Harris is reportedly cutting staff and pulling resources from other states to deploy to Iowa in hopes of keeping her bid afloat.  She made a good impression going after Joe Biden on the topic of school busing in an early debate, but it doesn't seem like she was ever able to build off that night and establish any momentum.  We'll see if this is too little, too late.

Good for Twitter for announcing they will no longer run political ads.  As CEO Jack Dorsey mentioned while explaining the company's decision yesterday,

"A political message earns reach when people decide to follow an account or retweet. Paying for reach removes that decision, forcing highly optimized and targeted political messages on people. We believe this decision should not be compromised by money," he added.

Now, if Dorsey could just do something about the infiltration of Russian bot accounts, and the unrestrained white nationalist influence on the site, we'd really be cooking.  Of course, Dorsey's competitor Mark Zuckerberg wants nothing to do with this plan, as Facebook continues to claim its decision to allow dishonest political ads is a free speech issue.

We're sorry to hear about all of the turmoil at Deadspin.com.  The site's new owners recently told the staff to just stick to sports, thereby ignoring what has made Deadspin so successful over the years.  That out-of-touch mandate led to the editor resigning, and now it looks like most of the staff has done the same, which seems likely to be the end of Deadspin as we knew it.  That's too bad.  We enjoyed Deadspin and linked to more than a few of their articles over the years.  This is one of the many reasons why we work for ourselves here.  BDH and Little Buddha are as friendly as you get, but no one tells them what they can and can't talk about.  Plus, can you imagine the reaction if someone said we couldn't have coffee here for some reason?  That would get ugly fast.

The Federal Reserve cut interest rates for a third time yesterday.  It looks like we will be part of the last generation that remembers when savers were rewarded for their fiscal prudence.  Not that we're bitter or anything.

Good for Elon Musk for donating $1 million to pay for the planting of a million trees around the world.  We still think Tesla shareholders are a little crazy to trust him with their money, but this is a good cause.  We all benefit by having more trees.

Congratulations to the Washington Nationals on winning their first World Series championship in franchise history.  The Nationals beat the Houston Astros 6-2 last night to take home the title.  Cheers to them, their fans, and their fans who supported the team back when they were the Montreal Expos.  The Nationals faced multiple elimination scenarios throughout the post-season, and they delivered the goods every time.  You gotta respect that.  It probably makes us a little petty, but we can't help enjoying that they pulled this off after losing Bryce Harper to free agency.  We're sorry that the Boston Red Sox are no longer the reigning champs, but this is a pretty fun title transition:

Former MLB All Star Josh Hamilton is back in the news, which is never a good sign.  Hamilton was charged with injuring one of his daughters yesterday and has been ordered not to have contact with her. He allegedly threw a water bottle and chair and then pinned her down on her bed and hit her back and legs.

Playing the New England Patriots occasionally seems to break their opponents for the long-term.  For instance, the Seattle Seahawks and Atlanta Falcons have never been the same since losing to Bill Belichick and company in the Super Bowl.  Now it looks like the Cleveland Browns might be the next team to come undone.  Mind you, they weren't in great shape to begin with, but last week's loss may have been the end of their hopes for anything resembling a productive season this year.

The NBA took a big hit with the news that Stephen Curry apparently broke his left hand while playing against the Phoenix Suns last night.

We love all of NBC's "One Chicago" programs here, but it's clear that Chicago Fire is having the best season of the three so far.  The storylines have been compelling, and just about everyone in the cast has had at least one stand-out moment.  It looks like things will go up another notch with the return of Monica Raymund as Gabby Dawson in the midseason finale on November 20.  (How are we already talking about midseason finales?  Where does the time go?)  This appears to be just a guest spot and not a full-time return to the show, but it should be fun to watch.

Okay kids, that's going to do it for now.  Given that it's Halloween, it seems fitting to have the Rolling Stones close things out with, "Sympathy for the Devil," for today's, "Song of the Day."

Thanks for stopping by, everyone.  It's always great to see you.  Enjoy the rest of your day, have fun with your kids if the festivities haven't been rained out, and we'll catch up with you again for more fun and coffee soon.  Until next time, that's today's Clearing out the Clutter, and we are outta here.