Welcome back!  How are you?  We're running a little behind today.  The plan was to record "Chicago PD" last night and go to bed, but BDH and Little Buddha asked if we could stay up and watch it instead.  I can't say no to those two, so we were up later than usual, and it was a bit difficult to get going this morning.  However, we're here, you're here, and there's only one thing missing - coffee!  Thankfully, the guys just made a fresh pot, so grab yourself a nice medium DD, and let's clear out some Thursday Clutter.

A group of House Republicans trespassed into a secure room where impeachment inquiry testimony was taking place yesterday yesterday, supposedly because they were angry about the alleged lack of transparency in the process.  The problem there is that several members of this group of thugs sit on the relevant committees and thus already had the right to be there.  Nothing says your guy is innocent like trying to stop people from talking about him and threatening your colleagues in the process.  The GOP knows Trump is guilty of everything he's being accused of, and their only shot for survival is to try to distract everyone from the substance of the claims. 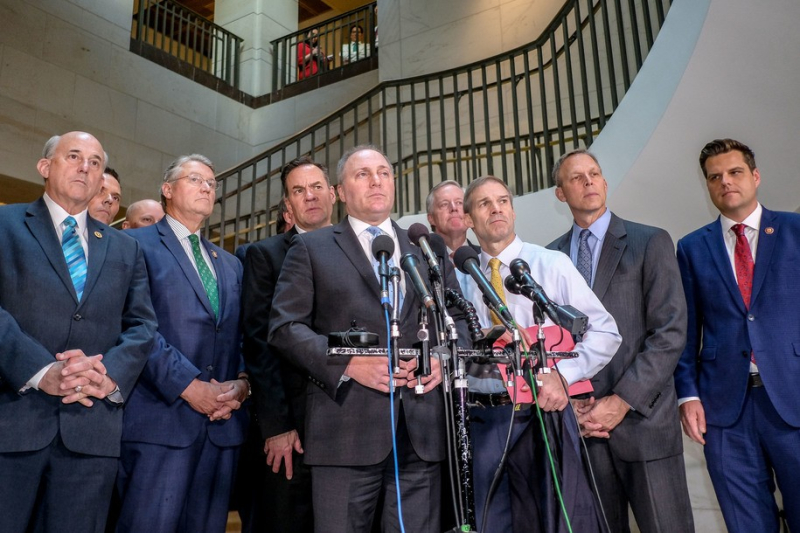 When reality isn't on your side, pull a stunt.  (pic via asumetech.com)

While that clown show was happening, Donald Trump was busy bragging about building a border wall in Colorado.  Who can spot the problem with that claim?  That's right, Colorado doesn't share a border with Mexico.  The corruption is the dangerous part, but the dementia is the exhausting aspect of this show.  We miss the good old days when the person in the White House had any idea what was going on around him.

Donald Trump lifted economic sanctions against Turkey after just nine days because Turkey and Russia have now made a deal to handle the Syria border.  So basically Turkey's President Recep Tayyip Erdogan and Vladimir Putin got everything they wanted - free reign to engage in ethnic cleansing and no need to worry about U.S. interference, while the Great Pumpkin kowtows to his ultimate boss.  Of course, let's not forget the ISIS prisoners who are now free again. It's a disgrace and embarrassment to this country to have a Russian agent in the White House.

Mark Zuckerberg was on Capitol Hill yesterday, and it did not go well for him, as lawmakers grilled him about a laundry list of Facebook's problems, especially their willingness to let politicians lie in ads.  Zuckerberg was there to talk about Facebook's new proposed cryptocurrency, and the notion of this company having anything to do with our country's financial infrastructure should terrify everyone, since it's been shown this crew can't be trusted with anything.

Congratulations to the U.S. House of Representatives for passing a bill to make animal cruelty a federal felony yesterday.  Our society should have no tolerance for this kind of behavior, and anyone who edngages in these horrific acts deserves prison.  Also, as the bill's lead co-sponsor Representative Ted Deutch (D-Florida) points out, people who do this are also more likely to be violent against humans.  The bill passed the House with bipartisan support, and here's hoping it can do the same in the Senate.

Google released several new apps which are all designed to help you reduce the amount of time you spend on your phone.  Unfortunately, they're only available to Android users at the moment, but we'd be interested in trying a few of them if they become an option down the road.

Is there any stopping the Washington Nationals this year?  The Nats beat the Houston Astros 12-3 last night to take a 2-0 lead in the World Series.  Off the field, the Astros still can't bring themselves to take responsibility for assistant general manager Brandon Taubman's rant against several female reporters in defense of abuser Roberto Osuna, so we're fine with the idea of them being swept this year.

Major League Baseball is investigating umpire Rob Drake after he tweeted that he would buy an AR-15 if Donald Trump is impeached.  Maybe it's just us, but we prefer umpires who don't threaten civil wars.

There's been a lot of speculation about what it means that New England Patriots quarterback Tom Brady is selling his Boston-area house and reportedly moving to Connecticut.  Our money is on the idea that Brady is looking at retiring after this year, especially if he wins a 7th Super Bowl ring.  There isn't another team in the league that would be a better fit for him.  Spending 20 years with Bill Belichick is probably a grind, but this is his best opportunity to win another championship, and he's treated like a god in New England.  He's not going to pull a "Joe Montana plays for the Kansas City Chiefs" move.  As we've said many times before here, enjoy the show while you can, Patriots fans.  We've been playing with house money for years.

It was a little surprising to hear that the Patriots put wide receiver Josh Gordon on IR with a knee injury yesterday.   It's expected that this will be the end of Gordon's time with the team, and of course one has to wonder if there's more to the story.  Regardless, we wish Gordon the best.

Kyrie Irving scored 50 points in his first game with the Brooklyn Nets last night, but Brooklyn still lost 127-126 to the Minnesota Timberwolves.  We're supposed to make a joke about why can't Boston get players like that, but we're still relieved Irving left town, even though the Celtics lost 107-93 to the Philadelphia 76ers.

Okay kids, that's going to do it for now.  Here's Green Day to close things out with, "Welcome to Paradise," for today's, "Song of the Day."

Thanks for stopping by, everyone.  BDH and Little Buddha want to remind you that you are welcome to come back tonight to watch the new Supernatural episode with them if you like.  Otherwise, enjoy the rest of your day, be good, and we'll catch up with you again soon.  Until next time, that's today's Clearing out the Clutter, and we are outta here.