Welcome back!  How are you?  The weekend got off to a bummer of a start here yesterday.  I don't know if my bad mood caused the stomach ache or vice-versa, but most of the day was a wash.  BDH and Little Buddha say we should put Saturday in the rearview mirror and focus on today.  Works for me.  It's raining at the moment, but on the other hand, the guys made coffee, so we're already off to a better start.  Grab yourself a nice medium DD, because it's time to clear out some Sunday Clutter.

In case you missed it since the last time we got together, a federal judge ordered the Department of Justice on Friday to turn Robert Mueller's grand jury material over to the House Judiciary Committee.  Judge Beryl Howell also ruled that a formal impeachment inquiry doesn't require a vote on a resolution, so Donald Trump's claim that what's going on right now is illegitimate?  That gets tossed right out the window.  Of course, Trump lives in his own little reality, so who knows if anyone's bothered to try to explain that to him yet.

A former national security representative is asking a judge if he has to testify in the impeachment inquiry.  Charles Kupperman says he's getting "irreconcilable" demands from the White House and House Judiciary Committee and wants the United States District Court for the District of Columbia to tell him what to do.  We suspect that the resulting ruling will be appealed either way.

Let's give Trump a chance to respond to what's going on - here's his latest campaign rally, courtesy of SNL:

It's always nice to see alums return for a skit.

Cheers to  Rachel Maddow for calling out her bosses at NBC on Friday night for their handling of Ronan Farrow's story about the Harvey Weinstein sexual assault allegations.  Maddow is one of the few employees who could do that without fearing reprisal.   The network also announced that all former staff have been released from any legal prohibitions against discussing their own experiences with sexual misbehavior at NBC.

We're on board for the upcoming Anthony Bourdain documentary.  Not seeing a release date at the moment, but we'd love to catch it in the theaters if possible.  Otherwise, we'll wait to see it on CNN.

The New England Patriots face the Cleveland Browns at home later this afternoon.  Of course, anything can happen on any given Sunday, but this should be the most straightforward win of the year for New England.  The Patriots defense is playing out of its mind, and there's no reason to fear Cleveland quarterback Baker Mayfield any more than there was when they went against Sam Darnold last week.  (That poor bastard is probably still seeing ghosts.)  The Browns need to run the ball to have any chance of being competitive today, and there's no way Mayfield's ego allows that to happen.  We're not saying New England will scar Mayfield to the extent that they did to Darnold...but we're not saying they won't, either. 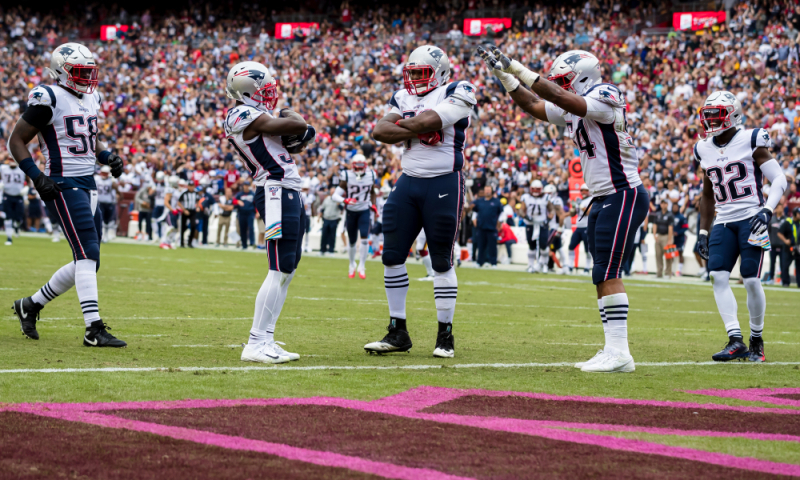 Today should be another good day at the office for the New England Patriots defense.  (pic via usatoday.com)

The New England Patriots are expected to waive Josh Gordon once he comes off the IR in 1-2 weeks.  What's key about that time frame?  It comes after the NFL's October 29 trade deadline.  That means Gordon will have to clear waivers, which increases his chances of going to a team who isn't a threat to New England.  The team doesn't miss a thing, but it increases the mystery around why Gordon is being sent packing in the first place.  It's obviously not a football performance issue if they're worried about him coming back to haunt them.  What happened here?

The Boston Red Sox finally hired Dave Dombrowski's replacement:  Chaim Bloom will become the team's new chief baseball officer.  Bloom comes from the Tampa Bay Rays.  Can't say we know a lot about him at the moment, but our gut instinct is to like the hire.  The Rays front office understands modern analytics, and they've consistently done a great job of finding good players who don't cost a fortune, a skill which will come in handy as Bloom likely prepares to start trimming Boston's payroll.  The work will begin soon, starting with whatever decision J.D. Martinez makes about his opt-out clause once the World Series is over.  Good luck to Bloom, he's going to need it.

The Houston Astros won't go quietly.  They beat the Washington Nationals 8-1 on Saturday night to tie the World Series up at two games apiece.  Donald Trump will be attending Game 5 of the World Series tonight, but he won't throw out the first pitch.  That's a shame, because that visual had potential to be the funniest thing to happen in this country in our lifetime.

We want to wish John Cleese a happy birthday today.  The Monty Python star is 80 years old.  Here's Cleese, and the rest of the Python crew in action in one of our favorite sketches:

Game of Thrones star Emilia Clarke posted a picture of her reunited with former castmates Jason Momoa and Kit Harrington.  Judging by this shot, Momoa is roughly the size of Andre the Giant in real life.

Eddie Murphy recently stopped by The Late Show, where he and host Stephen Colbert discussed a number of topics including Saturday Night Live, Barack Obama, Bruce Lee, and Murphy's new Netflix movie Dolemite Is My Name.  (Click here to check out our review of Dolemite.)  We're excited to see Murphy host SNL.  Can't remember the last time we had such high expectations for the show.

Of course, Eddie Murphy is making the round to promote Dolemite, so you can also check out his recent appearance on Jimmy Kimmel Live!

Do you think Jimmy was a little excited to have Eddie on his show?  Also, new life goal:  to be as relaxed about everything as Eddie Murphy.

Okay kids, that'll do it for now.  Can't remember the last time we had this band close things out here, and that's just not right.  Here's Genesis with "Turn It On Again" for today's "Song of the Day."

Thanks for stopping by, everyone.  Today's mood is already much better than it was 24 hours ago, now that we've had a chance to hang out.  Enjoy the rest of your day, stay dry, and we'll catch up with you again for more fun soon.  Sound like a plan?  It's a plan.  Until next time, that's today's Clearing out the Clutter, and we are outta here.