Welcome back!  Come on in, have a seat.  I was just talking to BDH and Little Buddha about how unproductive I was this weekend.  I tried, but I just could not get on track, besides watching the Patriots game.  They say I'm being too hard on myself, and that it's fine to have a quiet couple of days every now and again.  I guess.  Today's to-do list is pretty long, so I've got some running around to do before a repairman comes this afternoon to fix something here.  This has been on the list for ages, and now that I finally made an appointment, the item in question is working fine.  That sounds about right.  Okay,  enough grumbling.  The guys just made a fresh pot of coffee, so grab yourself a nice medium DD, and let's clear out some Monday Clutter.

Donald Trump announced yesterday that the US military killed ISIS leader Abu Bakr al-Baghdadi.  Most people in this country have no idea who that is, and anyone who believes anything Trump says would probably wonder why that was a big deal, since Trump told the world long ago that he crushed ISIS.  Trump couldn't let himself just take a political win, as he indulged in over-the-top rhetoric about Baghdadi  dying "like a dog...like a coward...spen(ding) his last moments in utter fear, in total panic and dread, terrified of the American forces bearing down on him."

He then slid into his usual delusional state, claiming this was a bigger deal than the death of Osama bin Laden.  Trump then claimed that he  knew in 2000 before anyone else that bin Laden was a threat to the United States.  Who thinks that holds up to a simple fact-check?  The man just can't stop showing off his insecurities and low self-esteem at every single opportunity.

Trump went out of his way to thank Russia for allegedly helping the operation.  (Trump also notified Russia of the operation before congressional leaders, like a good little foreign agent.)  Russia's response was to deny they did anything and to say they're not convinced Baghdadi is dead.  Is Trump not getting a Christmas bonus this year?  His bosses don't sound impressed with his job performance.

Meanwhile, there are questions about where Trump was during the raid, and there's a good chance he was actually playing golf while it was happening.

The world is getting weirder when John Bolton and Democrats are on the same page when it comes to Donald Trump and Ukraine.  Our country is still fortunate that Bolton's desire for war with Iran didn't come to fruition when he worked in the White House.  However, it appears he also agrees that Trump's dealings with Ukraine don't pass the sniff test.  No word yet on whether or not Bolton will end up testifying during the impeachment inquiry, but if that happens, we can't wait to watch the White House occupant claim he barely knows his former national security adviser.

A new book claims Donald Trump told former Defense Secretary James Mattis to "screw Amazon" out of a $10 billion Pentagon contract.  Gotta figure we'll be hearing more about that inappropriate interference in the weeks to come.

Representative Katie Hill (D-CA) is resigning her seat after allegations were made that she had an affair with a male congressional staffer.  Representative Hill denied that claim but did admit to a relationship with a female campaign aide.  It feels like an example is being made of a bisexual woman here, because it's hard to imagine a male legislator would be treated the same way in this situation.

The Kincade Fire continues to rage on in California, as 200,000 people have been evacuated at this point.  That includes some family members of ours, who are thankfully okay.  We wish the best for all of the impacted residents, as well as those trying to battle the blaze.

Are we really talking about the prospect of a third interest rate cut this year?  We already miss the days when we earned enough interest each month to buy an extra cup of coffee.

The New England Patriots beat the Cleveland Browns 27-13 yesterday, as they improved to 8-0 on the season in what was Bill Belichick's 300th career win as a head coach.  (He's now just the third NFL head coach to reach that mark.)  As expected, the New England defense carried the load, including a great run where they caused three Cleveland turnovers on three consecutive plays in the first quarter.  At that point, it seemed like the final score might end up being 72-0.  However, things settled down a bit.  Cleveland ran more than we expected, and if they stuck with that, this might have been a more competitive game.

The Patriots offense continues to have to grind out points, so thankfully the defense gave them so many short fields to work with yesterday afternoon.  However, the easy part of the season is over, so here's hoping they get some offensive linemen back soon (or trade for some help this week) and maybe a kicker.  Tom Brady and friends need to figure out their identity quickly, because the gauntlet begins with the Baltimore Ravens next weekend.

The Houston Astros beat the Washington Nationals 7 -1 last night to take a 3-2 lead in the World Series.  Life doesn't get any easier for the Nats, as the final two games of the series are in Houston, and they face Justin Verlander tonight.  However, that's the everlasting beauty of baseball, it ain't over 'til it's over.

Donald Trump attended Game 5 of the World Series last night, and the crowd let him know exactly what they think of him, as the Great Pumpkin was greeted with boos and chants of "lock him up!"  Trump got 4% of the vote in the 2016 election, so it's impossible to understand how he thought this would go well, but common sense and intelligence are not his strong points.  Clearly no one on his staff was going to talk him out of it, and it seemed like it took a few seconds for the brilliant stable genius to realize what was happening.  We'll see how long it takes him to complain/lie about this on Twitter today. 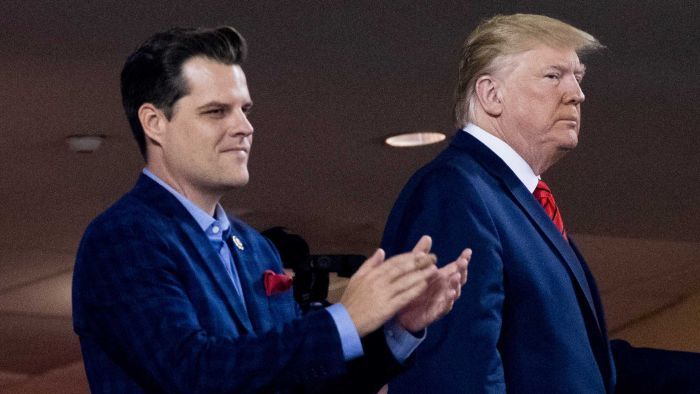 No love for the Donald.  (pic via newsnowvegas.com)

Sorry to hear that Houston Texans defensive end J.J. Watt is out for the the season again, this time with a torn pec.  This is the third time in four years that Watt's season has been cut short, and between back surgery, a broken leg, and now this injury, he's got to start thinking about his long-term health.  He's an amazing player, but he's only 30 years old and at this rate, he's at risk of being completely broken before he's 35.

We're disappointed to hear that actor Jared Padalecki was arrested Sunday morning on two counts of assault and one count of public intoxication after he allegedly hit a bartender and the general manager of a Texas club.  This is the first time we can remember hearing about anyone in the Supernatural cast behaving poorly.

Feels like we need to work some weirdness into the new week, so here's Jimmy Fallon and John Cena playing " Fish Slap."

We watched John Cena own WWE crowds with his promos for about 15 years, but he always seems so stiff in "the real world."

Thanks for stopping by, everyone.  It's always a treat to see you.  We are going back to the library today to return the graphic novel BDH and Little Buddha just finished.  They also want to see if volume 2 is in, so you're welcome to come back later and read it with them if you like.  Otherwise, enjoy the rest of your day, be good, and we'll catch up with you again soon.  Until next time, that's today's Clearing out the Clutter, and we are outta here.