(Film Review) Dolemite Is My Name

Eddie Murphy is ready to close out 2019 in style.  He'll be hosting Saturday Night Live in December, which will be the first time he's done that in 35 years. While we wait for that appearance, check out his new Netflix movie, Dolemite Is My Name, (out now.)  Murphy plays Rudy Ray Moore, a frustrated singer and comedian who found fame as a legendary blaxploitation star (and also became known as the "godfather of rap")  in the 1970's and 80's.  You can debate whether or not this is a comeback role for Murphy, but there's no doubt he delivers one of the best performances of his career in what turns out to be one of the biggest feel-good movies of the year.

The movie starts with Moore in 1970 trying to hustle his record store in-house DJ colleague into playing one of his old singles for the customers.  That's the primary theme of the movie - no one will ever out-hustle Rudy.  He's been plugging away at his career for over 10 years and thinks he might have been on track for some fame until James Brown "ruined everything."  Moore, who moved to California from Arkansas with big dreams wonders where it all went wrong.  You can feel the depression coming off the paunchy Murphy, which is not something you see often.

Things start to change when he comes up with the idea of a character named Dolemite who is based on stories from a local homeless man and his friends.  He takes the old rhymes from the men and polishes them up until he makes them his own, as the pimp/hustler Dolemite.   The new material is deemed too racy for record companies to release, so Moore decides to distribute the records himself, with help from his friends, (played by Mike Epps, Craig Robinson, and Tituss Burgess, who are all terrific sidemen.)  Of course, the R-rated comic routines fit Murphy like a glove, and it's a treat to watch the master at work again.  Moore is energized, and it all leaves one feeling excited about Murphy's own upcoming standup specials for Netflix.

Moore hustles across the country selling his records in small night clubs.  It's in one of those clubs where he meets Lady Reed, played by Da'Vine Joy Randolph, who is a pure delight.  Lady Reed makes a strong first impression when she knocks out her cheating husband before one of Moore's performances.  Randolph and Murphy have an immediate chemistry, which is one of the high points of the movie.  Rudy Ray Moore always has his sights on bigger things, and next up, he decides he wants to be in his own film, because, hey, why not?  Moore is driven to show the world that he exists.  There's an anger and resentment under that energy, which Murphy also handles well.

This group eventually gets their inexperienced film crew together, including Keegan Michael-Key as the straight-laced screenwriter, and Wesley Snipes as the director/co-star of Moore's movie.  You can guess many of the issues that they face along the way, but Moore continues to bet on himself, and his enthusiasm and motivation are infectious.  There are also a few moments where he has to deal with doubt and insecurity, and Murphy nails these small moments as well as the big ones.  You can't help but root for this group to succeed, and it's easy to remember why Murphy dominated comedy for so long.

Dolemite Is My Name is  a charming and energetic movie which makes two hours feel like 15 minutes.  Eddie Murphy clearly loves Moore, and his enthusiasm shines throughout the story.   The whole thing is a blast.  The comedian brought his A game, and the rest of the cast also nailed their roles.   There's been talk of various award nominations for Murphy, and it's not an unwarranted conversation.  It will be exciting to see where things go from here for the comic legend. 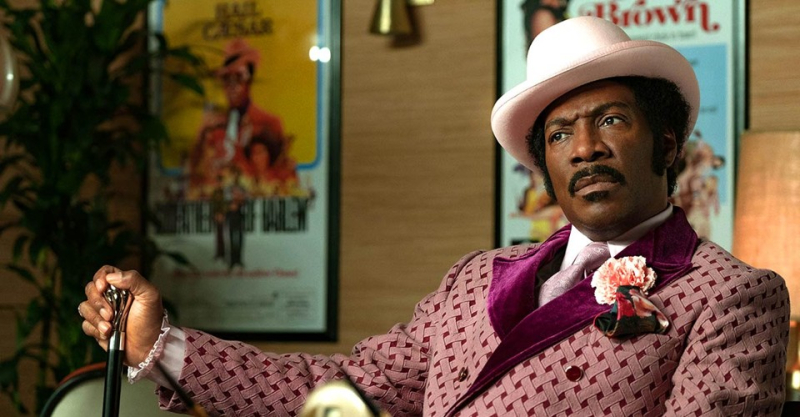 Eddie Murphy nails it in his latest role.  (pic via theatlantic.com)