(Book Review) Demi Moore: Inside Out

Demi Moore began her career as a model.  She then started her climb to fame as an actress in the early 1980's with a role on the soap opera General Hospital.  She eventually came to be known as part of the "Brat Pack," a group of young actors and actresses who were the "it" kids at the time and appeared in a number of movies together, including St. Elmo's Fire.  The group also included stars like Molly Ringwald, Rob Lowe, Judd Nelson, Ally Sheedy, and Emilio Estevez (who was engaged to Moore at one point.)  From there, the actress had the lead role in one of the defining movies of the 1990's - Ghost, where she played a widow who tried to find out what happened to her dead husband.  Throw in films like A Few Good Men, Striptease, and An Indecent Proposal, among others, add in being the highest-paid actress at the time, and top it off with marriages to stars Bruce Willis and Ashton Kutcher, and it seems like Demi Moore had it all.

However, underneath the surface was a woman who grew up in an unstable home environment that saw her and her family constantly moving to new locations as they ran away from one problem or another.  Moore was also raped as a young woman, and her mother's role in that incident is in question.  The result is Moore spending her life taking on whatever persona she felt she needed to be accepted, whether it was in school, her career, or her personal life, while also battling body issues.  She lays out the story in detail in her new memoir:  Demi Moore: Inside Out (available now.)

Demi Moore doesn't pull punches when talking about herself or those in her life, but the critiques feel even-handed.  She was done wrong by her mother Ginny numerous times, and she doesn't shy away from calling her out on it.  At the same time, Moore is able to understand how much of Ginny's behavior was caused by her own personal trauma, and how as a result, she wasn't able to be there for her daughter in the way Demi needed.  She also doesn't shy away from discussing in detail how she failed her own daughters at times, and how crushing it was to her to repeat certain aspects of her family legacy.

Bruce Willis is spoken of in glowing terms at first, but it's clear the couple had different ideas about their futures.  Moore speaks about where she felt unsupported at the time, and her gratefulness that she, Willis, and their daughters, have found a way to be there for each other post-divorce.  It's the same situation with Ashton Kutcher.  She can't praise him enough as a kind man who was a terrific step-father to her kids.  However, she also points out how she thinks he failed her, while at the same time, acknowledging her faults and demonstrating some understanding how the 15-year age difference meant they saw life differently.  Moore is also frank about how devastated she was by her miscarriage at this time, and her honesty will be inspirational for many who have been in the same situation.

At 250 pages, Inside Out moves quickly and is an engaging read.  There isn't a lot of gossip regarding the movies she worked on or her costars, with some exception for director Adrian Lyne's approach to Indecent Proposal.  For the most part, she discusses her bigger roles, has a kind word to say about her costars, and then goes back to telling the story of her personal journey.  There are many setbacks, both professionally and personally, but Moore demonstrates great resiliency throughout, and it sounds like she's in a good space these days.  Cheers to her for the honesty and courage of presenting this honesty for the world to digest.  Let's see what the next stage of her career brings. 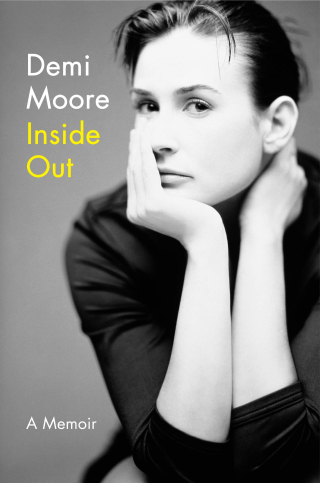 An engaging tale of self-discovery.  (pic via amazon.com)