Welcome back!  BDH, Little Buddha and I were just looking at the headlines, and there's nothing going on today.  No big stories of national importance that could decide the fate of democracy in the country or anything, so we were thinking about just going back to sleep and trying again tomorrow.  Does that work for you?  Of course we're kidding.  The guys just made a fresh pot of coffee, and you know what we're here to discuss.  Grab yourself a nice medium DD, and let's clear out some Wednesday Clutter.

House Speaker Nancy Pelosi finally announced the launch of an official impeachment inquiry into Donald Trump yesterday.  The growing outrage against Trump's abuse of power by withholding aid to Ukraine to pressure that country's president to find/create dirt on Joe Biden, was apparently too much for Pelosi to continue ignoring her constitutional responsibilities.  With more of her members coming out in favor of impeachment every day, including freshman in moderate districts, Pelosi was forced to take action.   She has directed the committees investigating Trump (Oversight, Ways and Means, Intelligence, Foreign Affairs, and Financial Services) to direct their cases for impeachment to the Judiciary Committee, rather than create a new panel.  Finally, the House stands up to say enough is enough. 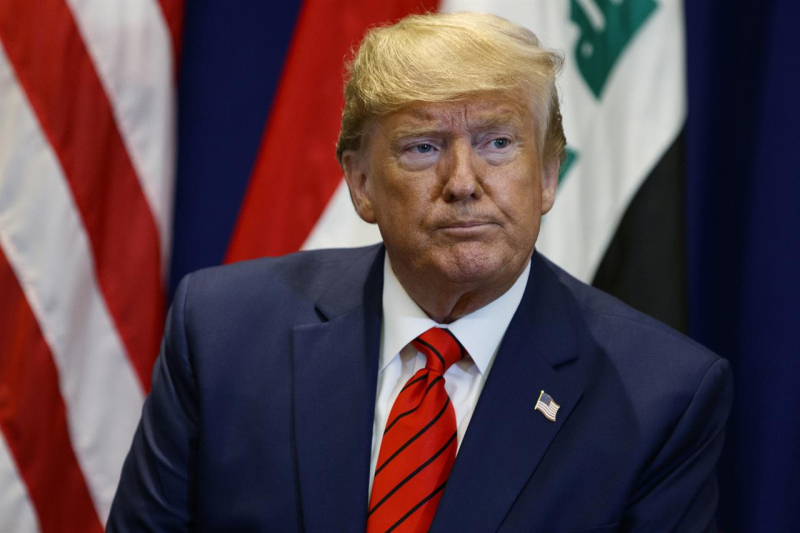 Donald Trump had a bad day on Tuesday.  (pic via am1380theanswer.com)

Trump and his allies will now throw their usual dishonesty at the wall and hope that it sticks.  The Great Pumpkin has already started the process by changing his story about why he withheld the aid from Ukraine.  That didn't take long.

While all of that was happening in the House, the Senate unanimously passed Chuck Schumer's resolution calling for the White House to release the whistleblower complaint to the House and Senate Intelligence Committees.  It's a non-binding resolution, but is this a warning sign to Trump that Republican senators aren't prepared to follow him off the cliff after all?   The longer this goes on, the more they may think Mike Pence doesn't look so bad for 2020.  (Spoiler: He does.)

Donald Trump says he'll release the transcript of his phone call to the Ukrainian president, but don't bet the house on it being verbatim.  However, we've got a copy for you:  "(Trump)  Do hugely legal things.  (Ukrainian president)  Okay, Great One."  As you can see, there's clearly nothing to worry about here.

Joe Biden's poll numbers are deteriorating, as his air of supposed invincibility seems to decline with each public appearance.

Vox Media is buying New York Magazine.  Don't worry, we're still independent and intend to remain that way for the long haul.  No one tells BDH and Little Buddha what to say.

The Boston Red Sox beat the Texas Rangers 12-10 last night.  It was the team's 82nd win of the year, so at least they'll finish this disappointing season above .500.  Boston starter Eduardo Rodriguez was "not sharp" to say the least, giving up seven runs and 11 hits in just five innings.  However, it was still enough to get him his 19th win of the year.  Manager Alex Cora has been clear that the team has high expectations for E-Rod, and their efforts seem to be paying off, as Rodriguez now has the chance to be the first Red Sox lefty to win 20 games since Mel Parnell in 1953.  We're looking forward to watching that start.  In the meantime, Rick Porcello takes the mound tonight against the Rangers in what may be his last outing as a member of the Red Sox.

Kansas City Chiefs quarterback Patrick Mahomes is already being compared to Hall of Famer Troy Aikman, and Aikman isn't having it.  Hmm, who do we root for here?

Carolina Panthers quarterback Cam Newton is reportedly dealing with a Lisfranc foot injury which could both wreck this season and hamper the remainder of his career.  Newton will miss this Monday's game against the Houston Texans while he tries to find a way to avoid surgery.  It would be a loss to the NFL if the 30 year-old quarterback is already past his prime.

Kyrie Irving took an elbow to the face during practice yesterday.  Hold on, he's not with the Boston Celtics anymore, so we don't care.  Moving on...

We've got the first trailer for Adam Sandler's upcoming movie, Uncut Gems. Sandler plays a jeweler who gets into some money problems, and it looks like Boston Celtics legend Kevin Garnett may have a prominent role.  Let's take a look:

What can we say, we're intrigued.  Uncut Gems comes out on Netflix in December.

Quick question:  We were in the bookstore yesterday looking for something to keep the guys busy until their next scheduled book arrives in a few weeks.  Actress Demi Moore has a new autobiography, and it's probably not a good match for our duo, but would you all be interested if we did a review?  Drop us a line at bitsofclutter@gmail.com if you want to know more about the former Brat Pack star's life.  Otherwise, we'll take another trip to check out the newest books next week.

We watched the NCIS premiere last night, and Ziva's return actually beat the hype.  No spoilers here, but she's not the same character who left the show, and the mystery about what she's doing here continues next week.

Okay kids, that's going to do it for now.  How about we have the Beatles close things out with, "Revolution," for today's, "Song of the Day."  Work for you?  Here we go:

Thanks for stopping by, everyone.  It was great to see you, as always.  BDH and Little Buddha say you're welcome to come back and watch NBC's "One Chicago" season premieres if you like.  The guys can get you caught up on each show ahead of time.  Just maybe bring some snacks with you?  We're running a little low.  Otherwise, enjoy the rest of your day, be good, and we'll catch up with you again for more fun soon.  Until next time, that's today's Clearing out the Clutter, and we are outta here.