Welcome back!  How are you?  BDH, Little Buddha, and I were just talking about today's to-do list.  It's nothing too crazy, so we'll finish that after we're done here.  The guys say the coffee is ready, so grab yourself a nice medium DD, and let's clear out some Tuesday Clutter.

Donald Trump ordered military aid withheld to Ukraine before his phone call with the country's president to pressure Voldymyr Zelenskiy to investigate Joe Biden.  The facts are right in plain sight, as they have been for years:  Donald Trump's corruption knows no limits, and this ongoing abuse of power must be stopped.  Democrats must begin impeachment hearings, and this latest incident in a long list of unethical actions has an increasing number of Democrats calling for that very thing, including seven freshmen representatives who flipped Republican seats.

Senator Mitt Romney (R-Utah) timidly called for more information about Trump's call with the Ukrainian president re: Joe Biden, and Trump responded with a video making fun of Romney.  Besides the fact that's the action of a two-year-old, we expect other Republicans will remain cowed into silence, lest the Great Pumpkin mock them as well.  Enough with waiting for the GOP to find a backbone:  Speaker Nancy Pelosi must move forward with impeachment proceedings and force every last Republican senator to cast their votes in the trial.

Cheers to Greta Thunberg for calling out the world's leaders at the United Nations for not doing nearly enough to address the threat of climate change yesterday.  Thunberg criticized them for ignoring science and for weak pledges to be sort of better about things in 30 or 40 years.  The 16-year-old Thunberg and her generation literally have no time for empty rhetoric.  Of course Thunberg's comments sent conservatives into a frenzy.  It's hard to imagine living a life that leads a person to attack a teenager for saying she wants people to stop destroying the planet. 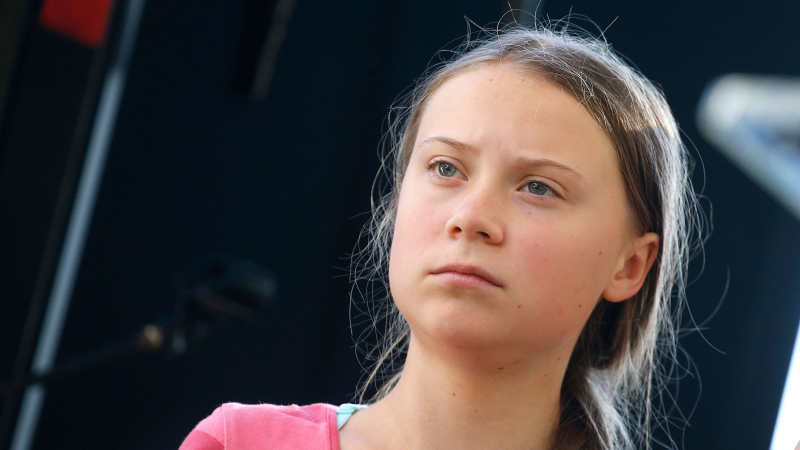 Greta Thunberg doesn't have time for your nonsense.  (pic via teenvogue.com)

A new poll shows Elizabeth Warren with an eight-point lead over Bernie Sanders in California.  For all of the national polls showing Joe Biden as the front-runner, he doesn't seem to actually be leading in any states besides South Carolina.

The Boston Red Sox lost 7-4 to the Tampa Bay Rays last night, so the quest for a winning record continues for the 81-75 Sox.  Boston is 5-5 in its last 10 games, so asking them to win just one more game out of thee final six isn't too big of a stretch, right?  Right?  Next up, the Red Sox move on to face the Texas Rangers as Eduardo Rodriguez looks to improve to 19-6 and secure the team's 82nd victory of the season.

The highlight of last night's game was Mookie Betts making this amazing throw from right field to nail Tampa Bay's Avisail Garcia in the bottom of the 6th inning.  Really, you've got to click on the link to see it.  We're talking the best throw in the majors this year.  We still hold out hope that the Red Sox will find a way to keep Mookie for the long-term.  Get rid of J.D. Martinez if you must, but it's going to sting if the team decides to move the outfielder this winter.

Sorry to hear that New England Patriots fullback James Develin went on IR with a neck injury yesterday.  He'll be out for a minimum of eight weeks.  It's still early in the season of course, but at this point, it looks like injuries are the only thing that could potentially stop this year's Patriots.

Jonah Hill is reportedly in negotiations to play a villain in the next Batman reboot, with Robert Pattinson in the lead role.  So far, that's two reasons for us not to see the movie in the theaters in 2021, although the possibility of Jeffrey Wright as the next Commissioner Gordon is a plus.

Supernatural star Jared Padalecki has his next gig lined up once the show ends this season.  No spoilers here, but our initial reaction is that we'll give the new project a chance because we like Padalecki, but it's going to be a small window to win us over.  In the meantime, we're still looking forward to watching him and Jensen Ackles fight one last good fight.

Hey, NCIS: New Orleans returns tonight.  We've really got to remember to start paying attention to TV schedules again.  This might be past our bedtime, but that's what DVR's are for.

We want to wish a happy belated birthday to Bruce Springsteen.  The Boss turned 70 years old yesterday, and he's still in fine form.

Okay kids, that's going to do it for now.  Here's Better than Ezra to close things out with, "Good," for today's, "Song of the Day."