Welcome back!  Come on in, have a seat.  How are you?  We were up past our bedtime last night so we could watch all of the "One Chicago" season premieres.  More on those later, but we'll probably have to set the DVR to record Chicago PD going forward, because we need our beauty rest.  On a completely different topic, did September go by faster than usual, or is that just us?  Maybe it's because it's been nicer weather than we were expecting.   Anyway, BDH and Little Buddha just made a fresh pot of coffee, so grab yourself a nice medium DD, and let's clear out some Thursday Clutter.

Acting Director of National Intelligence Joseph Maguire is scheduled to testify about Donald Trump's growing Ukrainian scandal before the House Intelligence Committee this morning.  All eyes will be on Maguire to see if his testimony is straightforward, or if he tries to cover for his boss.

First, to be clear, the document that was released by the White House yesterday was a memo about about Donald Trump's phone call with Ukrainian President Volodymyr Zelensky.  It's a collection of notes, not a verbatim record of what the two leaders said.  From that, we assume that the White House did whatever they could to paint the conversation in a light most favorable to Donald Trump.  Even with that likely spin, the document still makes it clear that Trump, sounding like a mob boss, leaned on Zelensky to investigate Joe Biden in order to get/make up dirt on a political rival, and that Trump wanted Attorney General William Barr (along with Rudy Giuliani) to be part of the process.  The White House occupant violated his oath.  He must be impeached, and a majority of the House is now on record supporting impeachment proceedings. 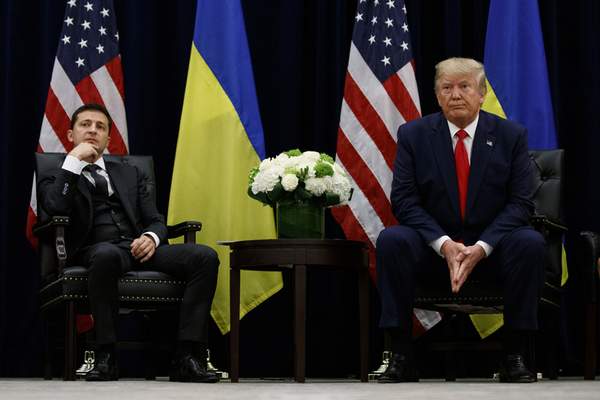 Donald Trump is being done in by his own words.  (pic via journalgazette.net)

If Senate Republicans cared about their oaths, they would be prepared to vote to remove Trump from office today.  However, we will point out that they have taken small steps away from the Great Pumpkin this week.  There was the unanimous support of the resolution to have the whistleblower complaint sent to Congress, Mitt Romney's cautious reservations about the Ukranian story, and now Senator Ben Sasse (R-Nebraska) warns his colleagues not to reflexively say "there's no there there."  Where will the next crack appear?

Meanwhile, Senator Susan Collins (R-Maine) would just like everyone to leave her alone.

The Boston Red Sox beat the Texas Rangers 10-3 last night.  Rick Porcello gave up the three runs over six innings and got the win in what may have been his last start with the Red Sox, but we'll see.  It seemed like it was a given that the team would move on from the right-hander since they've made seemingly no effort to re-sign him before his contract expires at the end of this season.  However, Boston Globe Sox writers, particularly Peter Abraham, seem to be pushing the message that Porcello was a consistent innings-eater during his time with Boston, and that perhaps a one-year deal makes sense, given the concerns about the health of Chris Sale, David Price and Nathan Eovaldi going into 2020.  Since the Globe and Red Sox are both owned by John Henry, one wonders if this is a hint to Red Sox fans.  As if to underscore the point someone named Travis Lakins makes the start for Boston tonight against the Rangers.

The New England Patriots reportedly signed quarterback Cody Kessler to be Tom Brady's new backup.  It looks like the Jarrett Stidham experiment is being slowed down after the rookie quarterback threw a pick-6 against the New York Jets last Sunday.  Stidham should probably be relieved Bill Belichick didn't cut him on the spot after committing such a cardial sin.

Antonio Brown's agent Drew Rosenhaus seems to think his client will play again in the NFL.  It just takes one idiot owner to keep this circus going.  Good luck to whichever team is foolish enough to sign this dumpster fire.

Our crew doesn't really know a lot about virtual reality video games, and that's probably for the best.  If you gave us a chance to play Doctor Who: The Edge of Time and "virtually" hang out in the TARDIS, we can't say for sure that we'd ever come back to this reality:

There isn't a lot of "must-see" TV on our weekly schedule, but we're hooked on NBC's, "One Chicago" shows on Wednesdays, and last night's season premieres all delivered.  We won't get into spoilers here (but they will be in the links) in case you need to catch up, but a few quick notes:  Chicago Med gave Dr. Connor Rhodes a proper goodbye, and it would be great if he decided to return someday.  Chicago Fire was heartbreaking, and cheers to everyone in the cast for their performances.  Chicago PD went in an unexpected turn with Antonio Dawson, which fans may or may not like.  However, the show did a good job of setting up some extended drama between Hank Voight and Jay Halstead.  Can't wait to see what happens next week.

We have a number of friends who will be excited to hear that Billy Joel's life is being turned into a TV series, and others who...will not be so thrilled.  Where do you stand on the "Piano Man?"

Okay kids, that's going to do it for now.  Feeling a bit of a Black Crowes vibe at the moment, so here's, "Remedy" for today's, "Song of the Day."

Thanks for stopping by, everyone.  It was great to see you, as always.  BDH and Little Buddha are already double-checking to make sure we have enough coffee for your next visit.  Enjoy the rest of your day, be good, and we'll catch up with you again soon.  Until next time, that's today's Clearing out the Clutter, and we are outta here.