Welcome back.  How is your weekend going so far?  Everything is fine on this end, except that I woke up with a splitting headache this morning.  I feel like I'm hungover, which is annoying, because I didn't have anything to drink last night.  Don't know what that's about, but BDH and Little Buddha already brought me some Advil and promised not to make a lot of noise this morning.  Of course, they also made coffee for everyone.  There's a fresh pot on the table, so grab yourself a nice medium DD, please speak softly, and let's clear out some Sunday Clutter.

A new poll shows Senator Elizabeth Warren leading Joe Biden by two points in Iowa, with Senator Bernie Sanders and the rest of the Democratic field far behind.  If you add the support of the top three candidates together, it only comes out to 53%, which means there's still a lot of voters who will need a second choice when their candidate eventually drops out of the race.  Warren is the only Democratic candidate with any momentum right now, as her numbers have been steadily improving, while the others have either flatlined or dipped.  It looks like the New Hampshire primary is becoming increasingly critical for Sanders.  Also, will voters in South Carolina stick with Joe Biden if he loses the first two contests of the cycle? 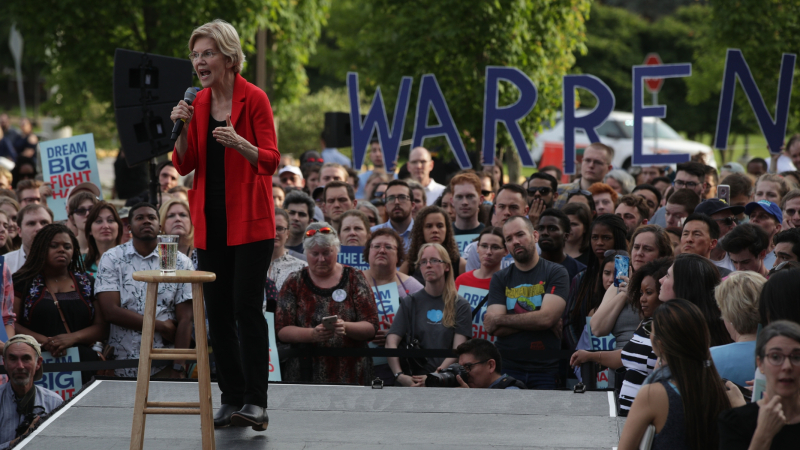 Senator Warren continues to connect with voters.  (pic via pastemagazine.com)

It's been revealed that Donald Trump repeatedly pressured Ukrainian President Volodymyr Zelensky to investigate Joe Biden and his son Hunter in hopes of gaining damaging information on a political opponent.  There's no bottom to the corruption of this administration, and Trump clearly hasn't been slowed down one bit by any investigation into his activities.  Meanwhile, Speaker Nancy Pelosi continues to pass the buck by talking about passing legislation to allow the indictment of sitting presidents.  Whether or not one agrees with that idea, the bill has zero chance of going anywhere, and it's just more empty words. Besides, a corrupt AG like Bill Barr would never enforce the law in the first place.  At some point, someone will need to investigate exactly why Pelosi has been so complicit in the atrocities of the last two years.

Alaska became the fourth state to cancel their Republican primary next year.  Nothing says confidence in your candidate by not allowing voters to weigh in.  The GOP isn't a fan of democracy, because they lose when more people vote.

The Boston Red Sox lost 5-4 to the Tampa Bay Rays in 11 innings yesterday, a day after the Rays officially eliminated them from the playoff race.  On the bright side, Rafael Devers set a new record for most home runs in a season by a Red Sox third baseman when he hit his 31st blast of the year.  At least Devers and shortstop Xander Bogaerts gave Boston fans something to be excited about all season.  Now, the 80-74 Sox need two more wins in their final eight games to finish above .500 for the year.  Hopefully that's not too much to ask.  Nathan Eovaldi takes the mound for Boston this afternoon.

The Red Sox had bullpen problems this year, but re-signing closer Craig Kimbrel wouldn't have been the solution.  Kimbrel has been a disaster with the Chicago Cubs in 2019.  He's got a 6.53 ERA, and he gave up two home runs on two pitches to the St. Louis Cardinals last night.  Granted, he's only pitched for half the season, but things often go south for relievers after age 30, and the Sox were smart to get out when they did.

That's enough of that:  The New England Patriots finally released wide-receiver/walking disaster Antonio Brown on Friday after 11 days of the player being nothing but a distraction to the team.  The Patriots don't get much credit for releasing Brown, because they never should have signed him in the first place.  However, apparently even Bill Belichick and Tom Brady understand there's a limit to their magical powers.  The question now is if Brown will find another team foolish enough to put up with him after he burned his way through Pittsburgh, Oakland, and New England in six months.  Somehow, we see the Dallas Cowboys calling his agent.

Now that the AB saga is finally done, the New England Patriots can focus on the New York Jets this afternoon.   The game probably won't be another 43 point blowout like they had against the Miami Dolphins last week, since the Jets by all accounts at least seem to be trying to win games.  Tom Brady apparently has a calf injury, and New England's offensive line is beat up, but it still says here that the Pats beat the 22 point spread.

There's a lot of new television shows heading our way this week.  What are you most excited about seeing?  For us, the return of NBC's "One Chicago" programs is the major attraction.

We've got the first trailer for Season 3 of The Crown, featuring Olivia Colman in the role of Queen Elizabeth II.  The change from Claire Foy to Colman is a bit like the Doctor regenerating in Doctor Who.  We wonder if Colman, who had a guest role in Doctor Who and also starred in Broadchurch with former Doctor David Tennant, asked Tennant for any advice about how to handle this kind of transition.  Judging by this clip, Colman made the adjustment just fine.  See for yourself:

The odds are good that Jerry Seinfeld is having a better month than you:  The cable rights to Seinfeld have been sold to Viacom, and the show will begin airing on its new home in 2021.  That's the same time that the streaming rights move from Hulu to Netflix.  This is a touch jarring, because the reruns have been airing on TBS since 2002, and we've come to associate the show with that station.  We'll find away to adjust in two years, while Jerry Seinfeld, Larry David, and everyone else connected with the business end of the show continue laughing their way to the bank.

Okay kids, that's going to do it for now.  Let's have Bob Marley & The Wailers close things out with, "Could You Be Loved," for today's, "Song of the Day."