Longtime readers know we are diehard David Tennant fans around here.  The former Doctor Who star can do no wrong as far as our staff is concerned, so of course we had to check out his guest role in the new Netflix show:  Criminal:  UK.  Tennant plays Doctor Edgar Fallon, a man accused of sexually assaulting and murdering his 14 year-old stepdaughter.  While Tennant continues his streak of terrific performances, the program's structure left us indifferent to the series.

The episode begins in a cramped interrogation room, as two investigators are running out of time to get Doctor Fallon to confess before they have to release him.  No matter the question or accusation they throw at him,  Doctor Fallon answers with a tired, "no comment."  In fact, that's all Tennant says for the first half of the show.  He looks haggard, and his eyes seem almost dead as he robotically stonewalls his interrogators, while several of their colleagues watch from the adjacent room.  Fallon almost successfully runs out the clock before he decides to change course and give his side of the story, and then you just have to see how the rest of it plays out.

Again, we could watch David Tennant in anything, and he's good as the suspect.  Regardless of whether or not he killed his stepdaughter, Doctor Fallon is a man who would make you feel uncomfortable after being in a room with him for five minutes.  However, it feels like the episode began two-thirds of the way into the story.  There isn't enough time to build a real notion of suspense about Fallon's innocence or guilt, so the conclusion feels flat.  There's also a subplot involving the relationship dynamics among the investigators.  However, who has time to get invested in that when we're still learning who everyone is, and then the show is over?  The whole thing is too rushed.

There are three episodes to the series, and unless there's a hint of David Tennant returning, we're not all that interested in watching the other two stories.  If you like him, you'll enjoy this performance, but it's hard to make a compelling argument that this is a program that requires further attention. 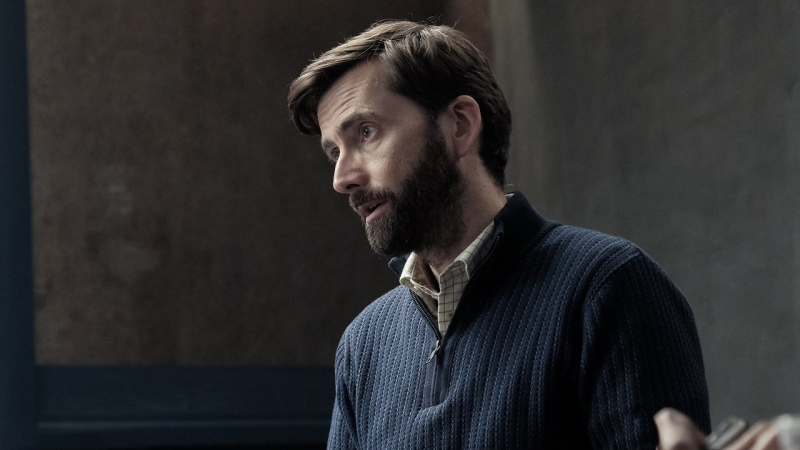 Innocent or guilty, David Tennant is creepy as hell in Criminal: UK.  (pic via ign.com)