(Review) Between Two Ferns: The Movie

Between Two Ferns, starring Zach Galifianakis, first debuted in 2012.  A take-off on community access talk shows, Galifianakis has hosted some of Hollywood's biggest stars over the years (as well as leaders like Barack Obama), and he's asked them some of the rudest, dumbest, and most awkward questions of their careers.  It's brilliant.  The episodes are only a few minutes long and have a high tears of laughter/minute ratio.  It's no accident that they've been watched so many times on the Funny or Die website.  Galifianakis and company decided to expand the concept to a new Netflix film called, appropriately enough, Between Two Ferns:  The Movie.  Unfortunately, this is not a concept that should be lengthened.

The movie takes the form of a "behind the scenes" documentary with Galifianakis playing the dim-witted host of the talk show who has dreams of making it to a network some day.  There's a bit of a The Office feel to the whole thing as the camera crew follows Galifianakis around all day.  This version of the show is also posted on Funny or Die, and site co-founder Will Farrell also appears as a cartoonish version of himself.  Due to a crisis that destroys the North Carolina TV station where the show is filmed, Farrell makes Galifianakis a deal:  He'll get the bushy idiot his own network show if he gives Farrell 10 more episodes first.  That's the excuse for Galifianakis and company to hit the road and hang out with some celebrities for the remainder of the movie.

What follows is the thinnest of plot and performances as this ragtag crew travels across the country.  Nothing that happens outside of the interview snippets is funny.  It's not even a little engaging.  You're left feeling antsy/increasingly irritable until the next interview begins.  There's a long list of famous people making cameos, including Matthew McConaughey, Keanu Reeves, Brie Larson, David Letterman, John Legend, Benedict Cumberbatch (who has the best interview in the movie), Jon Hamm, and more.  They're all game for whatever the host throws at them.  The problem is that each of these interviews are mere pauses in the tediousness of the rest of the movie.

If you make it through to the end, there are some interview outtakes during the closing credits.  They're funnier than anything else that just happened in the previous hour and change, and they will remind you why Between Two Ferns is so popular in the first place.  A movie that was just a collection of longer interviews would have been much more entertaining.  Any hardcore Galifianakis fans who can't miss a single performance of his will probably check out this movie, but everyone else can miss it without any problem. 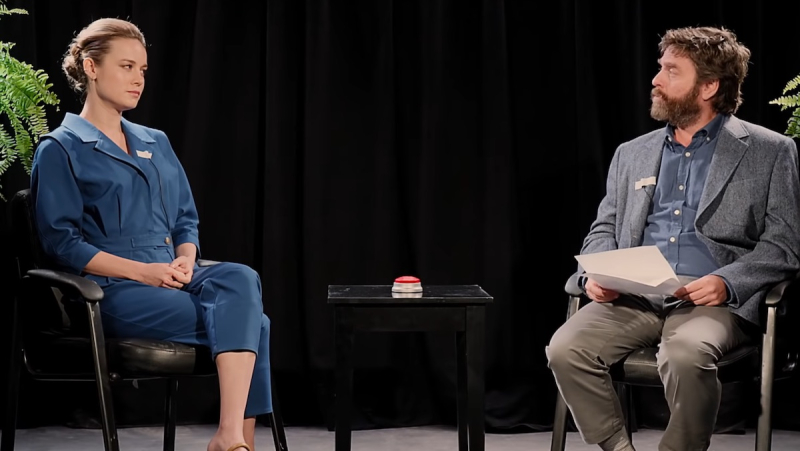 Awkward interviews are the bread and butter of Between Two Ferns.  (pic via nerdist.com)