Welcome back, and a happy Monday to you all!  Really, it's a chilly Monday is what it is.  BDH and Little Buddha just told me it's 38 degrees here at the moment.  I guess I'll finally have to start rotating the fall wardrobe back into active use and make sure the guys' sweatshirts are clean.  I'm still trying to convince myself that, apart from the end of gardening season, fall isn't that bad.  Making a little bit of progress on that front, but winter is still a drag.  I'm being told not to jump ahead a season, and that I should instead focus on the positive things about today, like coffee for instance.  Works for me.  There's a fresh pot on the table, so grab yourself a nice medium DD, and let's clear out some Clutter.

Donald Trump is being criticized for retweeting a quote predicting "a Civil War" if he's impeached yesterday.  Even a Republican had the courage to denounce that move.  It's yet another warning sign that Trump will not go quietly, whether it's by an impeachment trial conviction or loss in the 2020 election.  There better be some plans in place to deal with the fact that the White House occupant is a national security threat who will be happy to try to burn this country to the ground if he thinks that's what it will take for him to save himself. 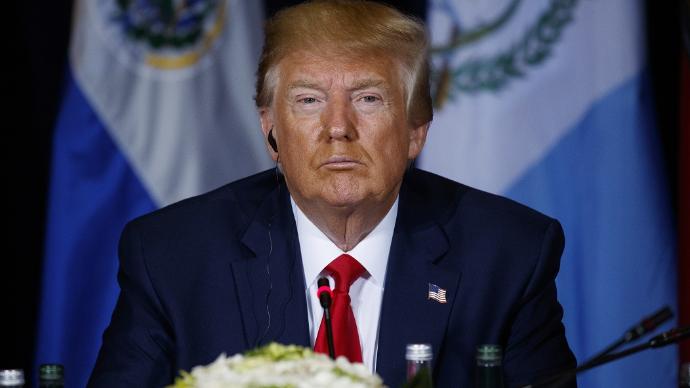 This is still going to get worse before it gets better.  (pic via www.cbs19news.com)

House Intelligence Committee Chairman Adam Schiff says Congress wants to see the transcripts of Donald Trump's calls with Vladimir Putin.  We imagine Trump will pull out all the stops to keep that from happening.  The Great Pumpkin will likely argue that no one has the right to know whether or not his boss gave him a good annual review.  Of course, at this point, the more the White House obstructs, the more ammunition they provide for an additional article of impeachment.

Chairman Schiff also said that the Ukraine whistleblower will testify before his committee "very soon" in a closed hearing.  Apparently, the remaining issues to be worked out are allowing his/her attorneys to also attend the hearing, as well as the logistics of protecting this person's identity.

Even Trump's first homeland security adviser told him that his Ukraine conspiracy theory was nonsense.

The Boston Red Sox beat the Baltimore Orioles 5-4 to end the 2019 season on a winning note yesterday.  The Sox were eliminated from post-season contention a while ago, but yesterday felt like a World Series game, as Eduardo Rodriguez went for his 20th win of the season.  E-Rod had a terrific final outing, giving up three runs on four hits over seven innings.  However, the 20th was not to be.  The Sox were up 4-3 after seven innings, but Matt Barnes couldn't hold the lead, and the Orioles tied the game in the top of the eighth.  It's too bad, because Rodriguez deserved to be the first Boston lefty to win 20 games since Mel Parnell in 1953.

However, that set up the electric conclusion to the season.  Mookie Betts walked to start off the 9th.  Rafael Devers then hit a ground ball (for his 201st hit of the year) that ate up Baltimore's shortstop.  Betts flew around the bases, and by the time Baltimore realized what was going on, Mookie slid into home to win the game and give the frustrating season an exciting ending.  Hopefully that's not the last time we see Betts in a Red Sox uniform, but it will be one hell of a final image if he's moved in the off-season.

(The end of the Red Sox season means we've got all sorts of free time on our hands.  Who wants to go see a movie or something?)

Now that MLB's regular season is over, let the managerial changes begin.  Joe Maddon will not be returning to the Chicago Cubs in 2020, and it sounds like David Ross is the leading contender to replace him.  The former Red Sox/Cubs catcher and current ESPN analyst strikes us as someone who would do a good job of communicating with players and leading the team, so good luck to Ross if he gets the gig.

The New England Patriots beat the Buffalo Bills 16-10 to remain undefeated yesterday.  It was an ugly day for the Patriots offense, who scored 13 points in the first quarter and then were mostly silenced for the rest of the game.  Tom Brady went 18 for 39 for just 150 yards and threw a terrible interception in the end zone.  He and the rest of the offense were rushed and harassed all day by the Buffalo defense.  However, New England's defense made life just a little more miserable for Buffalo's quarterbacks.

Josh Allen went 13 for 28 for 153 yards and three interceptions, and he looked like he had no idea what he was doing all day.  When in doubt, Allen's go-to move seems to be to move to his right and throw a deep pass, regardless of whether or not it makes any sense.  Allen was knocked out in the 4th quarter by a blow to the head, and backup Matt Barkley went 9 for 16 for 127 yards with an interception of his own.  The New England defense did allow their first touchdown of the season, but they caused havoc for the Bills offense all day long.  Next up, the 4-0 Patriots are on the road to face the 0-4 Washington Redskins next Sunday.

Martin Scorsese's new Netflix movie, The Irishman, is getting terrific reviews.  It doesn't come out on Netflix until November 27, so we've all got plenty of time to rearrange our Thanksgiving schedules to block out 3 1/2 hours to see if the movie lives up to the praise.

Okay kids, that's going to do it for now.  Here's Bryan Adams to close things out with, "Run to You," for today's, "Song of the Day."

Thanks for stopping by, everyone.  Hanging out with you is a great way to start a new week.  Enjoy the rest of your day, be good, and we'll catch up with you again for more coffee soon.  Until next time, that's today's Clearing out the Clutter, and we are outta here.