Welcome back!  How are you?  BDH and Little Buddha were just looking at the weather forecast.  It calls for rain this afternoon, so I'm trying to figure out today's schedule.  I could take care of a couple of errands and get in a nice walk this morning.  Hmm, we'll see.  In any case, we're glad you're here.  The guys just put the coffee on the counter, so grab yourself a nice medium DD, because it's time to clear out some Wednesday Clutter.

We're keeping our fingers crossed for the people of Puerto Rico, as they prepare for Tropical Storm Dorian.  It would be nice to expect that the United States government will do a good job of helping them deal with any aftermath, but we know better.

According to MSNBC, a source says Donald Trump's tax returns show Russian billionaires as co-signers for his loans. If that's true, it's no wonder Trump doesn't want the returns made public.  It's remarkable that a man so large can fit so snugly in Vladimir Putin's pocket.

Attorney General William Barr will reportedly spend $30,000 on a holiday party at the Trump International Hotel in December, because these guys will grab every last dollar they can until someone stops them.

Purdue Pharma, the makers of OxyContin, are reportedly offering $10-$12 billion to settle the more than 2000 lawsuits currently facing the company.  The Sackler family would also give up ownership of the company under the proposal.  The opioid epidemic in this country has claimed over 400,000 lives, according to the linked article.  Whatever Purdue's share of the responsibility for the crisis, the Sacklers should be in prison for the rest of their lives, but instead, they'll be allowed to buy their way out of prison.  As always, the lesson is that if you're going to commit crimes in the United States, always go big.

Sixteen of Jeffrey Epstein's alleged victims had the opportunity to tell their stories in court yesterday during a hearing to determine if charges against Epstein should be dropped following his apparent suicide.  We hope that the women found some solace in being able to share their experiences before U.S. District Judge Richard Berman, but this can't be the end of the story.  Prosecutors must continue to investigate and charge Epstein's accomplices.

Eating the new Popeyes chicken sandwich would violate our no fast food policy here, so we won't be trying it.  However, if you've had it, what's all the fuss about?  We've eaten chicken sandwiches from many restaurants over the years.  Some were better than others, but none of them were worth a national frenzy.

The Boston Red Sox beat the Colorado Rockies 10-6 last night. The offense was led by home runs from Jackie Bradley Jr., Christian Vazquez, and Xander Bogaerts, who all enjoyed hitting in that thin Colorado air.  Rick Porcello gave up two runs on eight hits over five innings for his 12th win of the year.  The Red Sox remain six games out in the AL wild card race with 29 games left to play.  Eduardo Rodriguez takes the mound against Colorado tonight.

Sorry, New England Patriots fans - it doesn't sound like Rob Gronkowski is eager to return to the NFL anytime soon.  Although he left the door open a crack for a comeback down the road, it's clear Gronk, like Andrew Luck, decided he was in a bad situation at 29 years old and had to take action to put his life in a better place.  As much as many football fans hate to hear it, there's more to this world than playing football.  The former tight end is apparently now a CBD champion, and that sounds like a great first post-playing gig for the big guy. 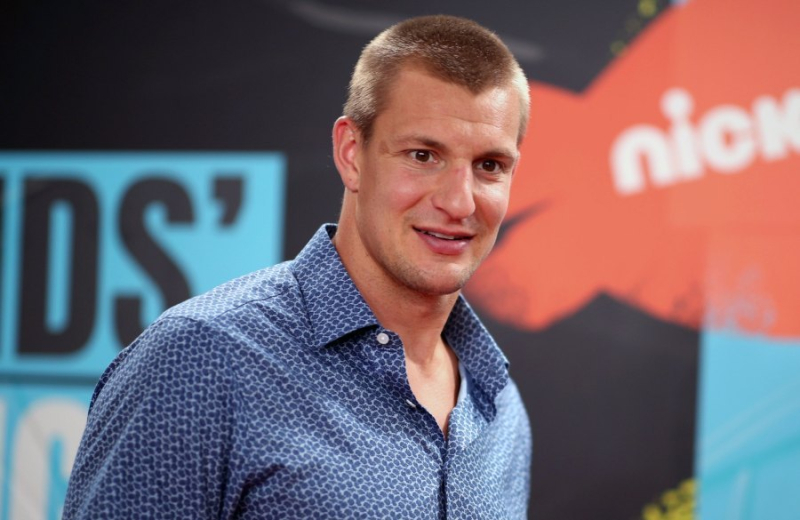 It's time for a new adventure for Gronk.  (pic via isupdate.com)

Martin Scorsese's upcoming mob movie The Irishman will be released to select theaters on November 1 and then on Netflix on November 27. It's going to skip a widespread run on the big screen, so it like we'll have to wait until the 27th to see it.  The film has an all star cast that includes Robert De Niro, Al Pacino, and Joe Pesci.  We're looking forward to watching this group in action, and if we don't have to pay for ticket to see it, all the better.

Leslie Jones is leaving SNL  so she can focus on other projects, but Kenan Thompson and Kate McKinnon will be back.

The final season of Mr. Robot begins on October 6.  Check out the trailer:

We've also got a few tidbits about the new season of A Million Little Things which premieres on ABC on September 26.  We're debating whether or not to review the show again this year.  Anyone have any thoughts about that?  Drop us a line at bitsofclutter@gmail.com.

Okay kids, that's going to do it for now.  BDH and Little Buddha were reading a book that referenced this tune yesterday, and it seems like a good way to wrap things up here.   Let's have George Michael close things out with, "Freedom '90" for today's, "Song of the Day."

Thanks for stopping by, everyone.  It's always a treat to hang out with you.  Enjoy the rest of your day, be good, and we'll catch up with you again soon.  Until next time, that's today's Clearing out the Clutter, and we are outta here.