Welcome back!  How are you?  BDH and Little Buddha just told me today's weather forecast calls for thunderstorms for most of the day.  I asked them if they think we'll really get the rain, or if it will once again end up being about 10 minutes of showers.  Their guess is that the storm is actually coming, so I may take care of a quick errand after we're done here.  I hope it rains, it would be good for the flowers.  We're in the final stretch of gardening season, but there might still be a few weeks left to go this year, and another good watering might help extend it a bit.  Anyway, let's check out today's headlines.  The guys say the coffee is ready, so grab yourself a nice medium DD, because it's time to clear out some Wednesday Clutter.

Donald Trump isn't hiding his antisemitism.  In fact, he's banking on it helping him get re-elected next year.  Trump insulted Jews across the United States yesterday by accusing those who vote for Democrats of either being stupid or disloyal which plays on the notion of Jews having a dual loyalty to Israel and this country.   That's a long-standing alt-right insult to Jews which plays straight to Trump's Nazi base.  Unfortunately, you can now expect a good chance of hearing a reference to it the next time there's a shooting which targets Jews. 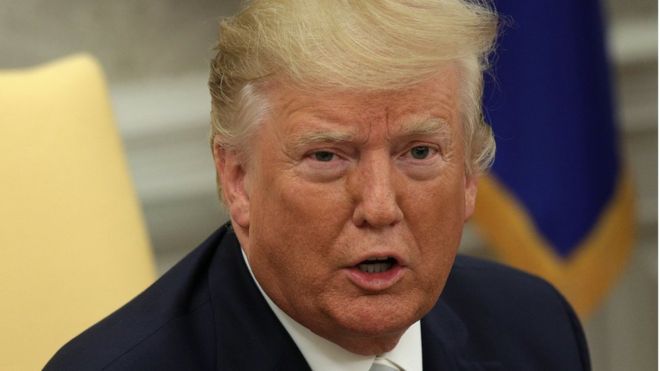 Trump will burn this country to the ground in order to stay out of jail.  (pic via bbc.com)

Donald Trump cancelled his upcoming trip to Denmark because the government won't sell him Greenland. That's almost too stupid of a sentence to comprehend, but that's where the devolving Great Pumpkin is at these days.

There are a lot of politicos in Massachusetts who would be interested in running for Representative Joseph P. Kennedy III’s congressional seat if Kennedy decides to challenge Senator Ed Markey in next year's Democratic primary.

Meanwhile, it's becoming clear that a Kennedy - Markey race could get nasty quickly.

Facebook is rolling out a new feature which will show you the information they collect about you even when you're not on the site. There's the option to delete that information, but as the linked article explains, that comes with several qualifications, because of course it does.  You don't really expect Facebook to completely give up all of that data now, do you?

The Boston Red Sox lost 3-2 to the Philadelphia Phillies last night, as their problems continue to pick up speed.  Boston starter Brian Johnson gave up the three runs in 3 2/3 innings, but the bullpen kept Philadelphia in check for the rest of the night.  The oft-criticized relievers have been on a roll lately, but one wonders if it's too little, too late.  The Sox are still just barely hanging in there for playoff contention.  They are six games out of the race for the second wild card spot, as Rick Porcello takes the mound against the Phillies tonight.

Keanu Reeves is having a moment, so it makes sense that there will be a Matrix 4. The film, which will also star Carrie-Ann Moss, will reportedly begin production in 2020.  Of course that means it won't be in theaters for a while, but we'll set the first box office estimate at roughly a gajillion dollars.

After all that, it turns out that Spider-Man's biggest threat in the MCU is...Sony? Marvel Studios and Sony apparently pulled the plug on working together, so Sony now has complete control over the web-slinger, and it looks like he's on his own again.  Not sure if we've got enough of an attention span to focus on both a Marvel and Sony Universe, but we'll see.  How about you, Spidey/Avengers fans?  Are you upset about this move, or will you just go wherever the stories lead?

Netflix released the first trailers for the upcoming Marriage Story, which stars Scarlett Johansson and Adam Driver.  The movie looks depressing, but it still might be worth checking out, especially if it turns out that it's a story about what the Black Widow and Kylo Ren do in their downtime.  See for yourself:

Apple TV+ released the first trailer for The Morning Show, starring Reese Witherspoon, Jennifer Aniston, and Steve Carell.  Reese Witherspoon can do no wrong around here, and this looks like it might be interesting, but it won't be enough to get us to subscribe for now.  Take a look:

(Sorry for that big gap before the clip.  Our IT folks are working on fixing it.)

Okay kids, that's going to do it for now.  Looks like it's getting darker out there, so we should probably get moving.  Let's have Nine Inch Nails close things out with, "Head Like a Hole," for today's, "Song of the Day."

Thanks for stopping by, everyone.  It was great to see you, as always.  Enjoy the rest of your day, stay dry, and we'll catch up with you again soon.  Until next time, that's today's Clearing out the Clutter, and we are outta here.