Welcome back!  How are you?  BDH and Little Buddha were just telling me the weather forecast for today.  Looks like we've got thunderstorms on the schedule for the afternoon.  I watered the garden yesterday, but some more rain couldn't hurt.  Guess I'll try to run a couple of errands this morning before it gets nasty out there.  First things first, though.  Let's check out today's headlines.  The guys made a fresh pot of coffee, so grab yourself a nice medium DD, because it's time to clear out some Tuesday Clutter.

Donald Trump's war on immigration continues without pause, as his administration released a new rule which would penalize legal immigrants who use public benefits. The man who has had everything in his life handed to him on a silver platter, and still managed to blow it in multiple bankruptcies, thinks those who need assistance should be removed from the country.  Let's be clear, Trump doesn't just object to undocumented workers, he opposes immigration as a general concept. 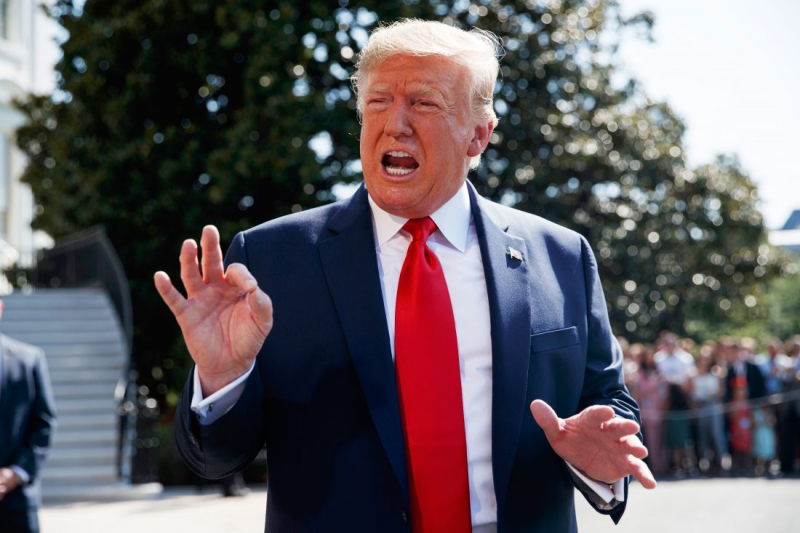 Counting on Nazis to keep him in office.  (pic via nashuatelegraph.com)

Thanks to their drive to find new awful things to do every single day, the Trump administration is planning to weaken the Endangered Species Act, because really, who needs animals?  Also, the announcement might distract a few people from Trump's ties to pedophile Jeffrey Epstein, his ongoing legal challenges, or the fact that the stock market is dropping, and the Great Pumpkin needs that as much as possible.  Democrats say they'll fight the proposed changes in court.

As much as we love the Dunkin' mother-ship, the fact that pumpkin coffee is returning to stores on August 21 does nothing for us.  Pumpkin coffee is wrong, and we're not consuming any fall-themed food products while it's still August.  On a similar note, the arrival of Octoberfest beers in the grocery stores last week was not well-received.  Stop rushing the seasons!

The Boston Red Sox lost 6-5 to the Cleveland Indians last night, thanks to a walk-off home run from Carlos Santana.  Eduardo Rodriguez gave up 10 hits (including two home runs) and five runs over six innings for Boston.  The Sox battled back from a 5-1 deficit and tied the game in the 9th inning, thanks to a two-out RBI double from Xander Bogaerts, but then Cleveland dropped the hammer on them when Santana hit the winning shot off Marcus Walden.  It was another tough loss, but all the Sox can do is move on and focus on tonight's game, when Chris Sale takes the mound against the Indians.

Sorry to hear that Blake Swihart was designated for assignment by the Arizona Diamondbacks yesterday. The former Boston Red Sox player's career has gone flying off the rails after a promising start.  Hopefully he will get a chance to reset and try again with another team next year.  He's versatile and still fairly young at 27 years old.

Alex Rodriguez's rental car was apparently broken into on Sunday, and the thieves made off with a reported $500,000 worth of goods.  We're just trying to imagine living the kind of life where you leave that much valuable stuff in your car.

Dallas Cowboys quarterback Dak Prescott reportedly turned down a contract extension offer of $30 million/year because he's looking for $40 million annually.  Wonder if that story came directly from Jerry Jones.  In any case, we don't have a feeling about Prescott's worth, but anything that is a distraction for the Cowboys is fine with us.

Eddie Murphy has a new movie coming out on Netflix this fall called, Dolemite is my Name.  Based on a true story, Murphy plays Rudy Ray Moore, the creator and star of the blaxploitation Dolemite movies.  We admit to not knowing anything about Moore, but this looks like it could be fun.  Check out the trailer:

We've also go the first look at season 3 of The Crown, which comes out on November 17 and features Olivia Colman taking over the role of Queen Elizabeth II:

If you've ever wanted to see Friends on the big screen, this is your chance:  Movie theaters across the country will be showing 12 classic episodes over three nights in September/October to celebrate the show's 25th anniversary.  We're not looking for the show to join the revival list, but a one-off reunion show might be fun.

Okay kids, that's going to do it for now.  Let's have new country music supergroup The Highwomen close things out with their take on the Fleetwood Mac classic, "The Chain," for today's, "Song of the Day."

Thanks for stopping by, everyone.  It was great to see you, as always.  Hmm, it's looking a little brighter out there.  Wonder if these afternoon thunderstorms are going to end up being 15 minutes of rain.  Anyway, enjoy the rest of your day, be good, and we'll catch up with you again soon.  Until next time, that's today's Clearing out the Clutter, and we are outta here.