Welcome back!  Come on in, have a seat.  How are you?  The rain came earlier than expected yesterday, so I got caught in it when I went out to run an errand in the morning.  That was an adventure.  The rain was sporadic all day, but I think the garden got a decent soaking, so that's good.  We were right on the border of a tornado warning for a little while in the afternoon, which was an unusual experience, but we're still standing.  BDH and Little Buddha say today's forecast just looks like it will be cloudy.  We can handle that.  The guys also say the coffee is ready, so grab yourself a nice medium DD, because it's time to clear out some Thursday Clutter.

Oh dear lord, the Greenland soap opera continues.  Donald Trump said Danish Prime Minister Mette Frederiksen made a "nasty" comment about his desire to have the United States buy Greenland, so that's why he cancelled his upcoming trip.  First off, nothing scares the Great Pumpkin like women in power, which is why he constantly lashes out by calling them "nasty."  Second, the man is clearly losing his marbles, and the mental deterioration is picking up speed.

No one in the GOP is going to do anything about it.  They'll follow him right off the cliff.   Meanwhile, Speaker Pelosi watches this and thinks the country will be fine putting up with it for another year and then rolling the dice on an election process we all know Trump is trying to rig.  The leadership in this country continues to fail us on a daily basis.

(Hold on, former Congressman Joe Walsh is expect to launch a primary challenge to the Great Pumpkin.  That should be interesting.)

There's also the issue that  Trump is now referring to himself as "the Chosen One." This is the action of an unhinged moron, and having him remain in the White House is an ever-escalating security risk for the United States. 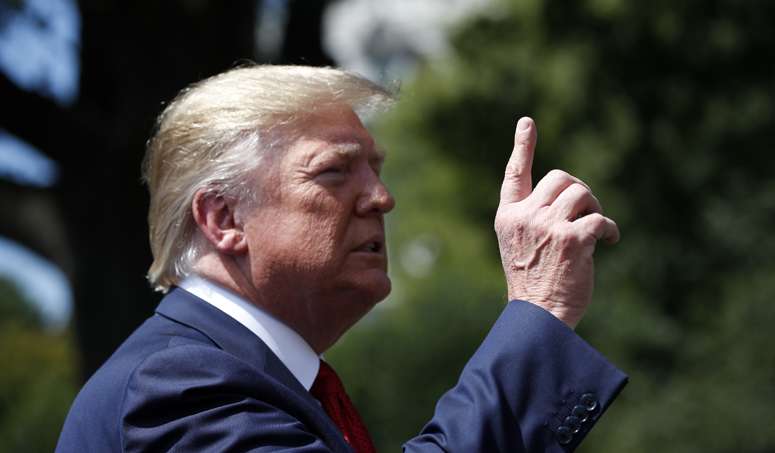 More delusional by the day.  (pic via whdh.com)

Shame on ABC for giving former White House spokesman Sean Spicer another stop on his rehabilitation tour by adding him to the new cast of Dancing With the Stars.   There should be no coming back from the damage that he and every one else associated with this administration have inflicted upon the nation.  We're excited not to watch a minute of this show.

The Democratic presidential primary field continues to slowly narrow down with Washington Governor Jay Inslee's announcement that he's ending his campaign. Governor Inslee was focused on climate change, and he helped make sure the topic was addressed while he was running, but it wasn't enough by itself to help him reach the 2% polling threshold required to participate in the next round of debates.

The minutes from the last Federal Reserve Board meeting make it clear that the recent interest rate cut shouldn't be considered the start of a new trend. Of course, the Reserve members will still have to deal with whatever irrational detrimental actions Donald Trump takes to try to bully them into further cuts.  There's nothing like having a White House occupant who puts his own interests before that of the country to keep you up at night.

The Boston Red Sox lost 5-2 to the Philadelphia Phillies last night and were swept in their two-game series.  We haven't felt much reason to be upset with manager Alex Cora this year.  Much of the team's struggles feel like they were beyond his control, apart from if he could have handled spring training and the starting rotation better.  However, calling on Chris Owings (he of a .148 batting average) to pinch-hit for Marco Hernandez when there were two men on base made no sense whatsoever.  The Red Sox are now 7 games out for the second wild card, and today they finish their suspended game with the Kansas City Royals.  Josh Taylor takes the mound for Boston this afternoon, as play resumes with the teams tied at 4-4 in the top of the 10th inning.  The whole affair could take 15 minutes or a couple of hours.

Red Sox star Mookie Betts wants to make sure you know he loves playing in Boston, regardless of what happens once his current contract expires after the 2020 season.  As we've said before, our hope is that Mookie and the team can come to a long-term agreement.  Despite the disappointment of this year, a team that features a core of Betts, Xander Bogaerts, and Rafael Devers has an exciting future ahead of them.  However, if the Sox decide they won't be able to get him to sign that new deal, they should trade him this winter.  A talent like Betts could go a long way to repairing this team's starting pitching, and if they think he's gone in 2021 no matter what, they should make the move soon.

The XFL revealed their team names and logos yesterday.  The rebooted football league begins play in February 2020, and given boss Vince McMahon's history with non-wrestling ventures, fans should enjoy it while they can, because the odds for a second season are slim at best.

There's a new trailer out for Rambo 5: Last Blood.  Still not sure we can bring ourselves to pay money to see this in a movie theater, but it's tempting.  Damn you, Sylvester Stallone.

We've also got the first Bombshell trailer for you to enjoy.  The movie about the sexual harassment scandal at Fox News stars Margot Robbie, Charlize Theron, and Nicole Kidman, and it comes out in December:

There was a Doonesbury strip in the mid-1980's where Mike Doonesbury freaked out about the Rolling Stones now being considered classic rock, and his younger brother was stunned Mike was old enough to remember them in their prime.  We remember thinking we would understand that better someday, and now we're already talking about millennial classic rock. That went by fast:
Okay kids, that's going to do it for now.  Feeling a need for some STP at the moment, so let's have them close things out with, "Interstate Love Song," for today's, "Song of the Day."

Thanks for stopping by, everyone.  It was great to see you, as always.  Enjoy the rest of your day, stay cool, and we'll catch up with you again for more shenanigans soon.  Until next time, that's today's Clearing out the Clutter, and we are outta here.