Welcome back!  How are you?  BDH, Little Buddha, and I were just talking about how excited we are that we're going to the Boston Comic Con to meet Doctor Who star Peter Capaldi on Saturday!  I don't think I've been to a comic convention in about 35 years, so this should be fun.  However, that's still two days away,  and there are a number of things that need to be taken care of first, starting with checking out today's headlines.  The guys made some coffee, so grab yourself a nice medium DD, because it's time to clear out some Thursday Clutter.

Jeffrey Epstein's autopsy revealed several broken bones in his neck. Experts say while it could be the result of a hanging, the fact that the hyoid bone was also broken is more consistent with strangulation, which only further heightens the controversy around Epstein's supposed suicide.  Our top question is, who will tell the public what really happened after Attorney General William Barr comes up with his version of a story?

Warning signs are flashing on Wall Street, as stocks fell about 3%, and a inverted yield curve appeared yesterday.  That's where the yield of a 10-year Treasury bond falls below that of a 2-year Treasury bond.  The inverted yield curve has a strong record of signaling an oncoming recession, although there's usually a decent lag between the two.  That means the economy could be heading for the rocks in about 12 months, leaving Donald Trump with nothing to run his campaign on but racism. Looks like managing the economy is harder than (unsuccessfully) keeping your family business out of bankruptcy court.   In the meantime, the Clutter investment team is still out enjoying the last few weeks of summer, but they are now at least occasionally keeping an eye on the markets in case a full-blown panic arises. 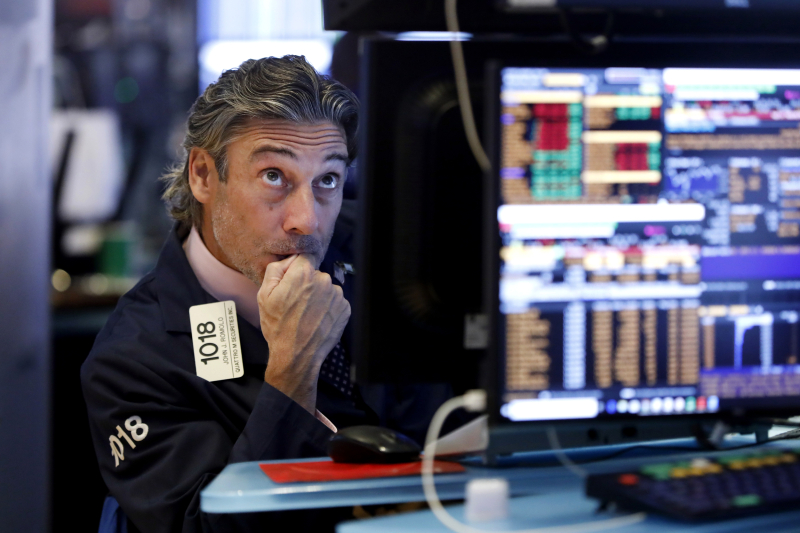 Storm clouds ahead.  (pic via nbcnews.com)

Warren Buffett's Berkshire Hathaway bought more Amazon and Bank of America shares recently. Of course this is pure speculation, but the Clutter investment team wonders if Buffett will continue to increase his bank holdings in the months ahead, because those shares will likely take a hit if the economy does in fact go into a recession.  If you can wait long enough, today's crisis can be tomorrow's financial gain.

Representative Steve King (R-Iowa) is being blasted from all sides for his comments that there would be no remaining population without rape and incest. That's his argument for not supporting any exceptions for abortion bans.  King has long been under fire for his white supremacist comments, and while that's the basic GOP platform these days, we still have to ask the voters of Iowa:  What are you doing?  Of course, now that we think about it, King's views on this subject don't really stray from the party line that much either.  As far as Republicans go, if you're not a wealthy straight white guy, you have no value.

The consolidation slowly continues with the news that former Colorado governor John Hickenlooper will reportedly drop out of the Democratic presidential primary today. No word yet on whether he will shift his attention to Colorado's Senate race, but hopefully that's the direction he's heading, because Democrats need to maximize every possible opportunity to remove "Moscow Mitch" McConnell from leadership of the chamber.

The Boston Red Sox beat the Cleveland Indians 5-1 yesterday, thanks to home runs from Xander Bogaerts and Rafael Devers, who are two of the biggest highlights of this season.  The Red Sox went through seven pitchers to take care of business, but that's okay since they have an off-day today.  Give the Sox credit, winning the series against the Indians was no easy task.  Now they need to do the same thing when the Baltimore Orioles come to town tomorrow as their playoff hopes continue to hang on by a thread.

Jay-Z is being criticized for his new deal with the NFL, because some like Eric Reid believe it's a way for the rapper to make millions while undercutting Colin Kaepernick's attempt to get back into the league after being blackballed for three years.

The 1980's Brat Pack movie St. Elmo's Fire is being developed into a television show at NBC, because...hey, why not?

Actor Danny Masterson and the Church of Scientology are being sued by four women who say they were sexually assaulted by Masterson.

Okay kids, that's going to do it for now.  Here are the Foo Fighters (with Jimmy Page and John Paul Jones) to close things out with their cover of the Led Zeppelin classic, "Ramble On," for today's, "Song of the Day."

Thanks for stopping by, everyone.  It was great to see you, as always.  BDH and Little Buddha say you're still welcome to come back and hang out later even though there's no Red Sox game tonight.  Maybe there's something to watch on Netflix.  Otherwise, enjoy the rest of your day, be good, and we'll catch up with you again for more fun soon.  Until next time, that's today's Clearing out the Clutter, and we are outta here.