Welcome back!  Come on in, have a seat.  How's your weekend been so far?  Everything is fine on this end, except that it's getting darker when we wake up in the morning, as well as earlier in the evening.  Don't care for that.  Don't care for that at all.  The good news is that a decent portion of the garden is still here, because everything is about a month off schedule this year, but pruning season is coming.  Don't like that either.  Oh, and I'm wearing a pullover this morning because it's a little on the chilly side.  Nope, that doesn't work for me.  Other than all of that, everything is fine.  At least BDH and Little Buddha are here, you're here, and the coffee is here.  There's a fresh pot on the counter, so grab yourself a nice medium DD, and let's clear out some Sunday Clutter.

The Trump administration doesn't like the fact that the G7 Summit highlights that Donald Trump is on the wrong side of issues like climate change and income and gender inequality.

Meanwhile, Donald Trump's desire to be a dictator continues to grow, as evidenced by his claim that he can force U.S. companies to leave China. Perhaps that was a suggestion from his BFF Kim Jong-un.  The man's mental state continues to deteriorate on a seemingly daily basis.

Hey, at least the Department of Justice is taking on the important issues now, like trying to secure Donald Trump the right to block people on Twitter.  Your taxpayer dollars hard at work, folks.

It feels like the 2020 primary season is already about three years old, but there's no mistaking the fact that Senator Elizabeth Warren (D-MA) is the only Democratic candidate who has shown momentum so far during this process.  Joe Biden may be in the lead, but people already know him, and his campaign hasn't done anything to break through his ceiling, while the other candidates also don't seem to be gaining any traction. 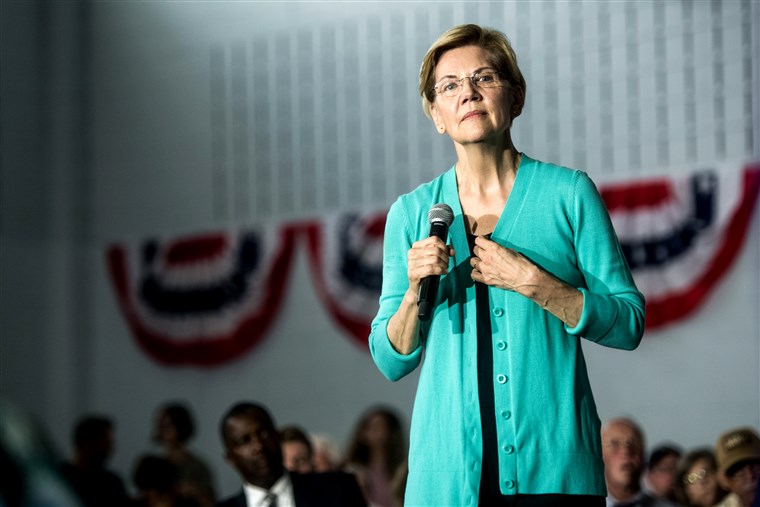 The Boston Red Sox beat the San Diego Padres 5-4 last night thanks to a 9th inning home run from Brock Holt.  The Sox had a 4-0 lead at one point before San Diego tied the game in the 7th inning, but hey, a win is a win.  The Red Sox now have a chance to sweep the Padres when Brian Johnson takes the mound for Boston this afternoon.  The 70-61 Sox are still six games behind in the race for the second AL wild card ard spot, which is not a great place to be in the final week of August, but it's also not insurmountable.  The team could still go on a run and make September interesting.

The big NFL news is that Indianapolis Colts quarterback Andrew Luck is scheduled to announce his retirement at a press conference today. While there may not have been a hint that this move was coming at this particular time, it can't really be much of a surprise.  The 29-year-old Luck has been abused during his six seasons in the league with shoulder, rib, calf, and ankle injuries, and it looks like it was finally just too much for him to deal with anymore.  Good for Luck.  He's got his whole life ahead of him, he made good money, and we're sure the Stanford University alum will be able to figure out his next career choice.  He certainly doesn't owe the garbage fans who booed him last night anything.  In the meantime, the Colts will now be led by former New England Patriots quarterback Jacoby Brissett.

We've got the expected release date for Black Panther 2.  Gotta warn you though, it's not anytime soon.

On the other hand, we've also got the first trailer for the upcoming Breaking Bad Netflix movie, and fans won't have to wait long for this one.  El Camino comes out on October 11.  Take a look:

If October 11 seems too far away, we've also got a sneak peak at some pictures from the This is Us season premiere which airs on September 24.

The Hasbro toy company now owns Death Row Records.  No word yet on whether or not we should expect G.I. Joe to appear on Dr. Dre's next album.

We're sorry to hear that Eddie Money apparently has stage 4 esophageal cancer.  Our thoughts go out to the singer and his family.

Okay kids, that's going to do it for now.  We heard this tune for the first time in forever last week, and it's aging well.  Here's Justin Timberlake to close things out with, "What Goes Around...Comes Around," for today's, "Song of the Day."

Thanks for stopping by, everyone.  It was great to see you, as always.  Looks like it's warmed up a touch, so go out and enjoy the great weather, be good, and we'll catch up with you again soon.  Until next time, that's today's Clearing out the Clutter, and we are outta here.