Welcome back!  How are you?  I promise (to try) not to obsess over this too much over the next few weeks, but doesn't it seem like the decreasing sunlight and dropping temperatures happened faster than usual this year?  Maybe I'm just in denial that we're already in the final days of August.  That's always possible.  Anyway, BDH and Little Buddha picked up two new books yesterday, and they're excited to have something to read for the next few weeks, so that should keep us busy around here.  In the meantime, let's check out today's headlines.  The guys just made a fresh pot of coffee, so grab yourself a nice medium DD, because it's time to clear out some Monday Clutter.

Donald Trump apparently thinks it would be a good idea to drop nuclear weapons inside hurricanes to prevent them from reaching the United States.  Just when you think the Great Pumpkin couldn't sound like more of a fool.  The problem is that he's a clown who also has control of said weapons.  That makes him dangerous, and leaves the rest of us depending on those around him to keep all of us from getting killed by the White House occupant.  It's not an accident that questions about Trump's mental health are getting louder.

Trump embarrassed himself at the G7 summit over the weekend with his admission that he regretted this trade war with China, only to force the White House to claim that he meant he regretted not being tougher to this point.  The man is damaging the economy and can't find a way out because he believes any admission of a mistake is a sign of personal weakness.  He'd rather bury us all before he does that.  This isn't leadership, it's incompetence.  He'll have to cut a deal at some point, and the odds are that it's going to be a failure, but he and his cronies will push it as an "amazing win" for the United States.

Former Rep. Joe Walsh (R-Illinois) confirmed yesterday that he's launching a primary challenge against Donald Trump. We probably don't agree with the Tea Party member/conservative talk show host on a single issue, but he and Bill Weld are just about the only two Republicans to stand up to Trump in any fashion, so more power to both of them.

The world is already too much of a mess for us to fully process Supreme Court Justice Ruth Bader Ginsburg being treated for cancer again. The Notorious RBG needs to be able to complete one more term, and let's be clear, this is the top issue of the 2020 presidential campaign.  Everything else an administration does can be corrected relatively quickly.  However, we live with the judicial appointments for decades after the White House occupant has left the building.  Donald Trump has already made his mark on the Supreme Court as well as lower courts, but he can not be allowed to replace Justice Ginsburg with another Brett Kavanaugh. 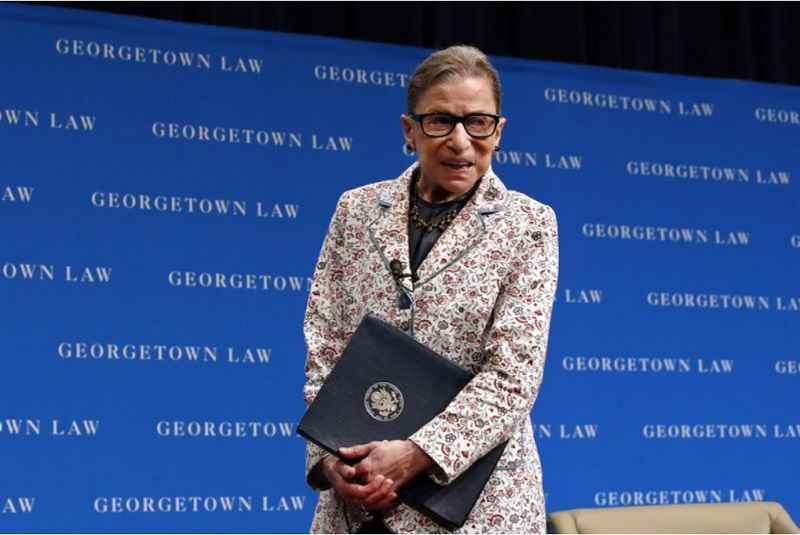 The Boston Red Sox lost 3-1 to the San Diego Padres yesterday. Sox starter Brian Johnson was in trouble right from the beginning and gave up all three runs in the first inning.  He was lucky the damage wasn't worse, because his control wasn't great, and the Padres batters didn't seem to miss anything in the strike zone.  However, everything quieted down after that.  The problem is that the Boston bats were also asleep, apart from J.D. Martinez hitting his 31st home run of the year.  The Red Sox won the series, but they really needed the sweep, especially considering the fact that the Indians, Rays, and A's all lost yesterday, so Boston missed the chance to pick up a game in the wild card race, and they can't afford to do that anymore.  The Red Sox have today off, and then they start a series against the Colorado Rockies on Tuesday.

Update from the Big Papi News Desk:  It was great to see that David Ortiz posted a picture of himself as he dropped off his daughter Alex at the Berklee College of Music yesterday.  That's the first time we've seen Big Papi since he was shot in June.  Here's hoping his recovery process is going smoothly.

Speaking of the Ortiz shooting, we were under the impression that he was on board with the official explanation given at the time that he was the victim of mistaken identity.  However, Big Papi has reportedly hired former Boston police commissioner Ed Davis to investigate the situation, so he seems to think there's more to the story.

The Indianapolis Colts apparently won't try to recoup any money from Andrew Luck after the quarterback announced his retirement.  After the pounding Luck took for the team over six seasons, and what consistently sounded like mismanagement by the medical staff (and the team for not giving him a competent offensive line), the Colts probably agreed to let him keep the money in exchange for him not suing them.

Okay kids, that's going to do it for now.  We need something to get this week started off on the right note, so here's a tune with one of our all-time more favorite guitar rifts.  We give you Black Sabbath and "Paranoid," for today's, "Song of the Day."

Thanks for stopping by, everyone.  It was great to see you, as always.  BDH and Little Buddha say you're "totally welcome" to come back later tonight if you want to celebrate National Dog Day by having them to read to you from one of their new books.  They do love an audience.  Otherwise, enjoy the rest of your day, be good, and we'll catch up with you again for more fun soon.  Until next time, that's today's Clearing out the Clutter, and we are outta here.

Posted by Colin Moore at 08:00 AM in Current Affairs, Music, Sports | Permalink | Comments (0)