Hanging out with Peter Capaldi in Boston

I finally got my chance to meet former Doctor Who star Peter Capaldi at this year's Boston Comic Convention, and it was awesome!

I haven't been to a comic convention in about 35 years, so this was a fascinating experience.  There were all sorts of people in various costumes.  Some of them went over my head, but those seemed to be anime characters.  There were a number of Avengers, including an impressive Iron Man costume.  Doctor Who was also represented, as there were a few people dressed as the 4th, 6th, 7th, 10th, 11th, 12th, and 13th Doctors.  The most impressive costume by far was a Bumblebee who seemed about eight feet tall.  Boy Meets World star Ben Savage was also amazed, and he briefly stopped his autograph session to pose for pictures with the gigantic robot.  A friend said the guy behind the costume is based out of Rhode Island and is a professional corporate mascot.  His gig clearly pays well, because he looked like he stepped off a movie set.

Having no idea what I was doing, it was a pretty straightforward process to get into the Boston Convention Center.  Security moved people through the detectors quickly to get inside.  After that, it was about a five-minute walk to pick up the pass, and then maybe another five minutes to get into the main hall.  The room was a little overwhelming at first, but I eventually got my bearings and headed straight to Capaldi's autograph line, which was already five rows deep.

Peter Capaldi is well-known for being good to his fans, and the convention was no exception.  Each autograph-seeker got 2-3 minutes of his time.  On the one hand, that's outstanding.  The autographs aren't cheap, and it would be disappointing to be rushed through the process.   On the other hand, it means the line moves slowly, so I stood for two hours before it was finally my chance to say hello.  Capaldi was wearing a black suit with a white shirt, John Lennon style sunglasses, and he had a buzz-cut (which was rumored to be for an upcoming role.)

I took full advantage of the time to tell him 1) His second season as the Doctor was about as close to perfect as Doctor Who gets.  2) Having known a few Malcolm Tucker's over the years, he was also brilliant in that role.  3) Our post about his role in Lewis Capaldi's music video is one of the most popular things we've written all year.  He could not have been nicer as we discussed the video for a few more minutes, and he asked what the post had to say about his performance.  Fortunately, it's a glowing review.

Just like that, it was time to move on.  However, I also purchased a photo op which was two hours later.  After roaming around the room looking for Doctor Who memorabilia  (which was sadly lacking), it was time to line up for the pictures.  There had to be at least 150 people in the waiting area.  However, for those like me who have never done this before, the line moves like a military drill.  Each picture takes 30 seconds at most, and then it's time for the next person.

There was an exception though.  A family dressed like the Ghostbusters took their picture with him and then started to walk out of the room. Something apparently went wrong with the shot, because the photographer asked them to come back and do it again.  The family included a very young child who was clearly starting to get overwhelmed with what he was being asked to do and seemed on the verge of a meltdown.  However, Peter Capaldi immediately dropped to his knees and coaxed the kid into smiling and posing again.  It felt like a pure Doctor moment.

I was up next.  He turned and said, "Hello again!" which he probably said to just about everyone.  However, after the picture was done, he thanked me again for supporting the Lewis Capaldi video.  That conversation was two hours and however many other autographs ago, and the fact that he remembered it inspired an adrenaline rush that lasted about 90 minutes.  Who am I kidding, it's still going on as we speak.   Did I mention he's good with his fans?

The picture turned out great, and I eventually decided, "What the hell, might as well get this one signed too," so it was back in line.  This time, the wait was only for an hour.  It's possible Peter Capaldi was slightly puzzled by the third meeting.  However, he still graciously agreed to a request for a doodle to go with the autograph, and he drew a little version of his "eyebrows" appearance in The Day of the Doctor.

That was it for the day, and while standing on concrete all day left me with broken feet and back spasms, the whole experience was a delight.   These events are expensive, and  I probably won't do another one again anytime soon, unless David Tennant or Hugh Laurie come to town.  However, as a one-time special treat involving an actor whose work I enjoy so much, it was worth it, and Peter Capaldi's extreme friendliness made it all the more special.   If he ever comes to a convention in your area, you should absolutely meet him. 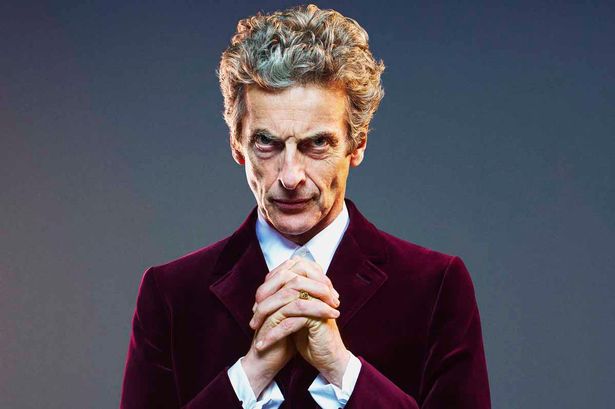 Peter Capaldi could not have been friendlier.  (pic via metro.co.uk)