Welcome back, and a happy Friday to you all!  Is it just me, or did this week go by quickly?  I was just telling BDH and Little Buddha that I had another one of those, "I don't have enough credits to graduate on time from college" dreams last night.  The guys told me they double-checked, and I already graduated, so there is nothing to worry about.  Those two are the best.  They also want you to know that the coffee is ready.  There's a fresh pot on the counter, so grab yourself a nice medium DD, and let's clear out some Clutter.

Republicans are blowing up the deficit once again, and it appears Donald Trump is fine with trying to fix that by gutting Medicare if he makes it to a second term.  Just one more reason on a constantly-growing list why the Great Pumpkin needs to be removed from office.

Nothing to see here, folks:  Just the Justice Department sending immigration judges the link to a white nationalist site. The DOJ blamed a third-party contractor and said the whole thing was an accident.

The United States economy grew 500,000 fewer jobs than originally claimed over the last 12 months.   The Trump Twitter meltdown should be happening anytime now.

Sarah Sanders has joined Fox News, the retirement home of several former Trump officials.  Sanders is one of the most dishonest spokespeople in recent memory, so she's a perfect fit for Fox.

The Boston Red Sox beat the Kansas City Royals 5-4 in just 12 minutes yesterday. That's one way to fix the pace of games issue.  This was of course the continuation of the suspended game between the two teams on August 7, and the Sox wasted no time taking care of business.  Josh Taylor had a 1-2-3 inning in the top of the 10th inning.  Christian Vazquez hit a one-out double in the bottom of the 10th and was lifted for pinch-runner Chris Owings.  Sam Travis was intentionally walked, Brock Holt hit a walk-off single to drive in Owings, and that was the entire game.  Cheers to the 16,441 people who showed up to Fenway Park for this game, knowing full well that it might not last long.  The Sox are now on a West Coast trip as they fight to stay in the hunt for the second AL wild card.  (They're currently 7 games out.)  First stop: San Diego to start a weekend series against the Padres. 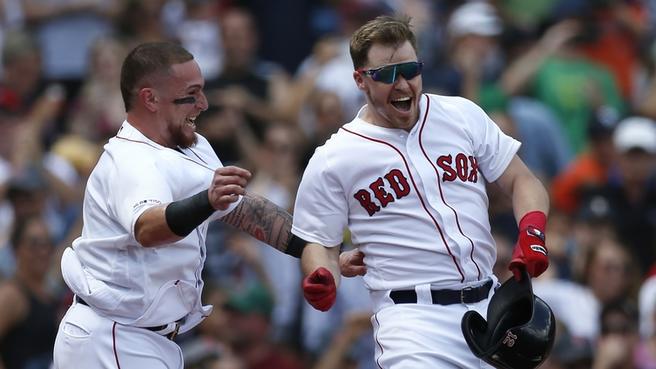 Brock Holt and the Red Sox had a fun day at Fenway on Thursday.  (pic via nbcsports.com)

New England Patriots safety Patrick Chung will be arraigned on cocaine possession charges next week.  As we understand it, the story is that Chung's home security alarm went off after a suspected break-in.  When police came to investigate, they found cocaine in the home, and thus the indictment.  Assuming that's what happened, we don't particularly care one way or the other about this story.  However, it's hysterical to read online comments from Patriots fans who are bending over backwards to argue that Chung's rights were violated, because 99% of these guys would be defending the police in any other situation.  The power of a uniform is remarkable.

We wished Brian Flores the best when he left the New England Patriots to take over the Miami Dolphins in the off-season.  However, seeing how Flores is now in some trolling contest with wide receiver Kenny Stills over Jay-Z's new partnership with the NFL, we're not worried about the Dolphins suddenly getting their act together this year.  Can you imagine Bill Belichick getting distracted from the task at hand like that?  Not in a million years.

Edward Norton has a new movie coming out on November 1.  Not sure if Motherless Brooklyn will make it to the theaters anywhere around here, but it might be worth watching at home on a rainy afternoon.  Check out the trailer:

The HBO series Ballers begins its final season on Sunday, probably because Dwayne "the Rock" Johnson is too busy appearing in every single movie and doesn't have time for this anymore.

Our Wednesday nights will start getting busy again in about a month when Chicago Fire, Chicago Med, and Chicago P.D. all return on September 25.

Okay kids, that's going to do it for now.  Let's have the Goo Goo Dolls close things out with their cover of the Supertramp hit, "Give a Little Bit," for today's, "Song of the Day."

Thanks for stopping by, everyone.  It was great to see you, as always.  BDH and Little Buddha don't think they'll be able to stay up for the entire Red Sox game since it starts at 10:00 tonight, but you're still welcome to come back later if you want to hang out some more.  Maybe we can find a movie on Netflix or something.  Otherwise, enjoy the rest of your day, be good, and we'll catch up with you again soon.  Until next time, that's today's Clearing out the Clutter, and we are outta here.