Welcome back, and a happy Friday to you all.  What's on your schedule for the weekend?  Unfortunately, I'm going to a wake for a close friend's brother today, and then the funeral is tomorrow.  Kevin was a huge presence everywhere he went, and it's weird to process that all of that energy is gone in the blink of an eye.  I'm definitely looking forward to some time in the garden afterwards.  As for right now, BDH and Little Buddha say the coffee is ready, so grab yourself a nice medium DD, and let's clear out some Clutter.

Senate Majority Leader Mitch McConnell says the Senate will debate gun violence-related measures in September. McConnell said he won't call Senators back to Washington from their break early because he doesn't want "finger-pointing."  One might suspect that what he's really hoping for is that the public will have moved on to something else by then.  In any case, the Senate needs to pass the universal background check legislation that's already been approved by the House. 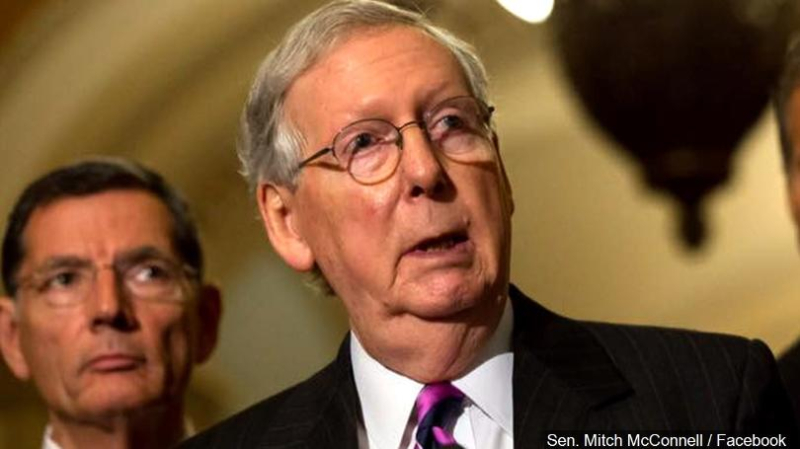 Stand up for America for once, Mitch.  (pic via wymt.com)

Authorities have released almost half of the undocumented workers who were arrested in Mississippi earlier this week. As Donald Trump continues to stoke the fires of racism and hatred, did any of his supporters ask why none of the plant's owners were detained?  Probably not, because if they're white, it doesn't matter.

Kraft Heinz is a mess, and the company's shares are down almost 40% so far this year. Just one more example why the Clutter investment team prefers to focus on mutual funds.  Just reading the article makes us feel a little anxious, so here's to tracking large sectors of the economy over the long-term instead.

Chris Sale was outstanding last night, as the Boston Red Sox beat the Los Angeles Angels 3-0 last night. The lefty gave up just two hits with no walks and 13 strikeouts over eight innings and was in control of the game from start to finish.  It also gave him 203 strikeouts for the year, which is the 7th straight year he's had over 200 K's.  Granted, it was against the 56-60 Angels, but that's the kind of outing Sale needed to boost his confidence after such a challenging year.  The question now is if he can build on it for the final weeks of the season.  In the meantime, Brian Johnson takes the mound for the Sox against the Angels tonight.

Boston Red Sox starting pitcher David Price is on the 10-day injured list because of a cyst on his left wrist.  That's an unusual injury for a pitcher, and he's apparently had it for at least his last four starts, which have all been atrocious.  Why did it take so long to do something about it?  While he's on the 10-day IL for now, Alex Speier said during last night's broadcast that the team would have to take a wait-and-see approach regarding how long Price could be out of action.  Maybe he'll be back next week, but we're taking odds on whether this turns into a long-term issue that impacts the remainder of the season.

We were busy watching the Red Sox, and preseason football really isn't our thing to begin with, but people seem to be impressed with rookie quarterback Jarrett Stidham's performance as the New England Patriots beat the Detroit Lions 31-3 last night. Going 14-24 for 179 yards and one touchdown does sound like a good beginning.  What do you think Pats fans - are we looking at the possible future of the team here, or is everyone just eager to have something to talk about before the regular season begins?  Is it both?

Miami Dolphins wide receiver Kenny Stills criticized team owner Stephen Ross for hosting a fundraiser for Donald Trump. Stills is an African-American man commenting on racial justice, and we know that doesn't play in the NFL, so it will be interesting to see if his career takes a hit because of his comments, but good for him for speaking out.

The WWE's SummerSlam  is coming to Boston in 2020. That's one of the major events of the year on the professional wrestling calendar.  It also means the WWE will be running shows in town on both sides of Sunday, August 23, so Boston fans will have a lot to look forward to that week.  The odds are that we will not be attending, because our feeling is that wrestling is like football - it's much better on television.  However, there will probably be other related activities happening in Boston to promote SummerSlam, and we might check those out.

Sorry to hear that country music legend Willie Nelson was forced to cancel the rest of his summer tour because of a breathing problem.  Rolling Stone reports that his publicist says the tour will resume on September 6, so hopefully the 86-year-old icon will be able to continue performing for a long time to come.  If you get the chance to see Willie live, you should jump on it.

Motley Crue drummer Tommy Lee retweeted a funny rant that goes after conservatives on just about every front, and now Trump fans are in a lather.  We admit we didn't predict a Lee v. Trump voter fight, but we are here for it.

Okay kids, that's going to do it for now.  Let's close out the week with a new track from Bruce Springsteen.  Here's, "I'll Stand By You," for today's, "Song of the Day."

Thanks for stopping by, everyone.  It was great to see you, as always.  BDH and Little Buddha are already asking when you'll be back, but no pressure or anything.  Enjoy the rest of your day, be good, and we'll catch up with you again soon.  Until next time, that's today's Clearing out the Clutter, and we are outta here.