Welcome back, and a happy Friday to you all!  In addition to Labor Day, this is moving weekend in Boston, so BDH and Little Buddha are already looking out the window to see who is coming and going from the neighborhood.  There have been a handful of moving truck sightings, but the major craziness happens over the next two days.  Navigating that circus is a rite of passage in Boston, and I'm so happy we aren't part of that zoo anymore.

BDH wasn't here for any of our moving adventures.  However,  Little Buddha still remembers being packed up and then having to settle into a new location, and he's much happier watching everything from Clutter Headquarters instead.  Anyway, enough about that, let's check out today's headlines.  The guys made a fresh pot of coffee, so grab yourself a nice medium DD, because it's time to clear out some Clutter.

We're hoping for the best for everyone in Florida who has to prepare for Hurricane Doria as it bears down on the state.

Former Vice President Joe Biden is being criticized for a 1988 newspaper column he wrote which praised welfare reform by invoking racist stereotypes such as, "welfare mothers driving luxury cars and leading lifestyles that mirror the rich and famous."   Add this to the previous stories about his authorship of the 1994 crime bill, Biden complimenting segregationist senators, his opposition to busing, and his various comments about black kids in hoodies, among other things, and the result is a mindset that's best left behind in the last century.  Democrats don't need a candidate who has a troubling history when it comes to race relations - the Republicans already have one of those.

Joe Biden is also taking grief for apparently combining three stories into one that never actually happened at a recent campaign event and then swearing it was the truth.   It doesn't matter if this was a lie or a mistake.  Again, Republicans have already cornered the market on candidates who have a flexible relationship with reality.  Donald Trump will have a field day shamelessly ripping Biden for every "gaffe"  if he's the eventual nominee.  Democrats should be providing clear alternative to voters. 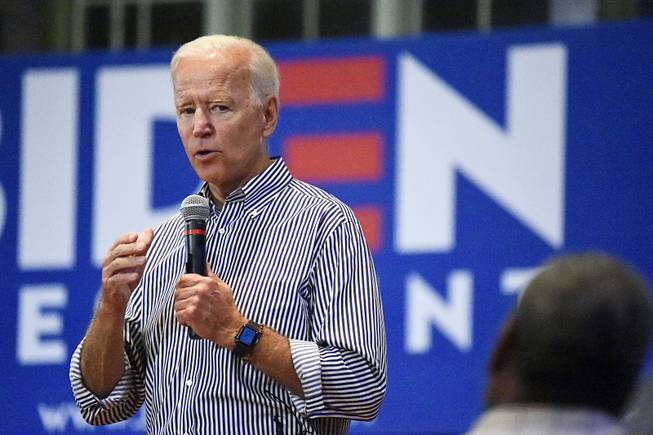 There are better options.  (pic via lasvegassun.com)

Speaking of Donald Trump, he made a point of telling people that China's leaders called him this week to restart trade talks.  Turns out, that didn't happen, much to the shock of no one.  The Great Pumpkin needs a win, and of course he lies whenever it will help him.  This is the GOP brand.   Voters already know this.  Democrats should not offer a diluted version of the same faulty product.

Meanwhile, the Trump administration is ramping up its war on immigration to another level by deporting families who are in this country to get lifesaving medical care.  This group's cruelty knows no limits.

Donald Trump's personal assistant Madeleine Westerhout resigned yesterday. The story making the rounds at the moment is that she was fired for gossiping about the Trump family with reporters.  As always with this administration, it's prudent to wait and see what, if anything, comes out further down the road.

Representative Joe Kennedy III still hasn't made an announcement about his future plans, but a new poll shows that Kennedy has a resounding lead over Senator Ed Markey. Will the 42% - 25% gap be enough to push Senator Markey to consider retirement before the Massachusetts primary?  Of course, this is just one poll.  However, is a generational change movement building in this country that longtime incumbents need to take seriously.  We saw it in Massachusetts when Ayanna Pressley defeated Mike Capuano in 2018, despite there not being many policy differences between them.  People want new leaders, and Kennedy's surname certainly doesn't hurt in this case.  However, if Markey does decide to step down, will other candidates jump into the race for an open seat?  Stay tuned.

Google researchers say they found websites that were able to indiscriminately hack any iPhone that visited them. They notified Apple, who has since patched the vulnerabilities.

In other Apple news, mark your calendars:  This year's new Apple products will be unveiled on September 10. Doesn't sound like any major upgrades are expected, but it's always interesting to see what gets the most attention.   In any case, we just got a new phone a few months back, so it's going to be about six years before we're in the market for another one.

We drove past the smoldering remnants of this dump truck yesterday.  Hopefully the driver is okay, because it was not a pretty sight.  The front of the truck was just gone.

As we get ready for the final month of the regular season, the Boston Red Sox' playoff hopes depend on both the team going on a hot streak and other teams faltering in September.   It's a stretch, to say the least.  However, the Red Sox have the talent to go on a run (even if they haven't done it all year), and MLB history is littered with stories of teams collapsing down the stretch.  It's going to take some serious good luck to overcome a 5 1/2 game deficit in one month, but hey, that's why they play the games.

What?  A Fred Durst-directed movie starring John Travolta as an obsessed fan isn't getting good reviews?  That doesn't sound right.

NCIS released a promo for their season premiere on September 24.  We watched this show religiously up until a few years ago, so that's our bias, but this ad is tremendous.  It makes Ziva's return feel like an epic event, as it should.  Can't wait to see how this story-line plays out.  Check out the trailer and see for yourself:

Doesn't that seem more like an ad for a movie than a TV show?

It sounds like the powers-that-be are open to Christopher Meloni eventually making a return appearance on Law & Order: SVU before the show ends.  The problem is that it could be another 20 years at this point before that actually happens.

Okay kids, that's going to do it for now.  Let's have Dave Matthews wrap things up here with a shout-out to everyone moving this weekend.  Here's, "Where Are You Going," for today's, "Song of the Day."

Thanks for stopping by, everyone.  BDH and Little Buddha can't stop smiling every time you're here.  Enjoy the rest of your day, good luck to anyone dealing with traffic jams, and we'll catch up with you all again soon.  (Wait, that will probably be in September.  Yikes!)  Until next time, that's today's Clearing out the Clutter, and we are outta here.